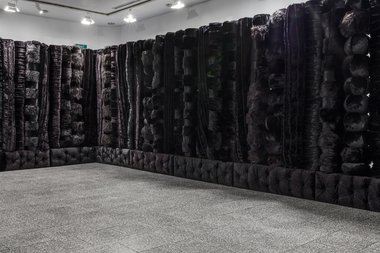 Temin's wobbly pillars come in five or six variations, different patterns in fabric use, exploiting the different lengths of hair and velvety sheens (and blackish chromas) of the luxuriant synthetic material. Some are striped (diagonally, horizontal and vertical); others are banded or stacked up as towers of balls. Raised up high, they are on long boxlike plinths, also covered with synthetic fur and tufted like upholstery.

Kathy Temin is well known in New Zealand for her residency exhibition at the Govett-Brewster in the mid-nineties, her participation in Aussemblage, the Australian group show at Auckland Art Gallery - and her subsequent exhibitions at Hamish McKay and Sue Crockford. This installation focuses on a theme she has been developing for many years now, the Holocaust, lead by the fact that her father was a Hungarian Jew interned at Sachsenhausen concentration camp.

The show consists of vertical treelike memorials (covered with fake fur) in the two large rooms (the gallery and the central foyer) and an arrangement of three wooden coffinlike seats (with tape recordings and headphones) in the small gallery.

The large rectangular gallery, with its line of over a hundred vertical furry columns following the perimeter parallel to the walls - and leaving a gap so you can enter a ‘courtyard’ within - is richly varied in associations, from the dark forests the trains passed through when they transported the victims to the labour (or killing) camps, to monumental walls or sexual fetishism or hairy body parts.

Temin’s wobbly pillars come in five or six variations, different patterns in fabric use, exploiting the different lengths of hair and velvety sheens (and blackish chromas) of the luxuriant synthetic material. Some are striped (diagonally, horizontal and vertical); others are banded or stacked up like towers of balls. Raised up high, they are on long boxlike plinths, also covered with synthetic fur and tufted like upholstery. You can explore the claustrophobic alleys on the outside of the wall or the open space inside. The lights are positioned directly over the column tops to accentuate the sheens and keep the furry surfaces dark and ominous.

In the courtyard under the stained glass dome, Temin has placed a monument that doubles as a circular seat as well as a woolly stupa with a cluster of pillars. It is more of a conventional memorial, a site for contemplation of one particular example of humanity’s atrocities. To access further detail you can go to the small gallery with its three wooden coffinish seats with horizontal batons that allude to some of Frank Stella’s early paintings (Their titles referred to Nazi camps). There Temin presents an archive of audio recordings she has collected of interviews with Jewish Hungarian concentration camp survivors. Over eight hours worth is available to be listened to, in surprisingly restricted and intimate circumstances; three listeners at a time.

The three benches present three sets of eye witness accounts: One features Jews living in Budapest, Hungary; Another is based a group of boys who were in Buchenwald, and various other Jews who live in Poland; The third consists of those who came to live in New Zealand. One boy’s acount of life in the besieged ghetto, describes his mother giving her sons three lumps of sugar each a day as their only daily sustenance. Another anecdote describes a NZ custom’s officer’s kindness in personally lending the speaker’s father (when he arrived) the money to pay duty on a bottle of cognac, a loan his father promptly repaid on getting his first job.

The visual representation of the Holocaust is a complex, issue-laden, widely disputed topic that Temin circumnavigates through her use of aural recordings. Her documentation of interviews is related to Claude Lanzmann‘s nine and a half hour long film Shoah which, to accompany the dominantly verbal soundtrack, deliberately presents no photographic images of victims or murderers, only shots of trains, railway lines, forests and overgrown camp sites. Of course mental images conveyed via language and not photography, drawing or painting, might be considered even more potent, for while Lanzmann scorns any opportunity to include visual documentation, he (and Temin also) emphasises the role of the imagination.

Temin’s language-based aural narratives suit the austere black wooden seats they come with. They have a very different presence than the lines of soft pillars which, for all their chilling denotation, are oddly (and perversely) cuddly. The fur works seem Surreal, in the manner for example of the strangely textured paintings of Max Ernst, while the sound and hard ‘coffin’ works make you shudder. They are alarmingly vivid.