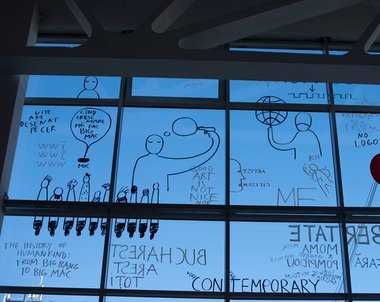 The major drive of Hoyos and Schumacher's curatorial approach is a focus on Romanian artists - both at home and working abroad - as well as artists whose work is in some way tied to the country. Their goal is to “look at Romanian art from the 1960s up to now and …trace back some of the inherent storylines,” while avoiding overarching narratives or nationalist stereotypes.

Everywhere you walk in the centre of Timisoara, there seems to be construction work happening. The central square and surrounding boulevards all resemble rebuilding efforts sometime after a bombing raid; roads being repaired and edges being redrawn. In other places, the construction seems more like the city is building something brand new from the ground up, the grand old buildings in the city centre now framed by orderly roads befitting their stature. In different ways, both suggest a useful analogy for what the organisers and curators are trying to achieve with Art Encounters.

The organisational structure behind this event was initiated by Ovidiu Șandor, a Romanian art collector and member of The Russian and Eastern European Art Acquisitions Committee of the Tate Modern Museum, London. The curators, Nathalie Hoyos & Rainald Schumacher are both based in Berlin, and their vision for the first edition of what is intended to become a new Biennale has its roots in research done last year for an unrealised Biennale project in Bucharest.

Under the title Appearance and Essence, they have gathered together a collection of work spread across multiple venues throughout the city, as well as four venues in neighbouring Arad. The major drive of the curatorial approach is a focus on Romanian artists - both at home and working abroad - as well as artists whose work is in some way tied to the country. Their goal is to “look at Romanian art from the 1960s up to now and …trace back some of the inherent storylines,” while avoiding overarching narratives or nationalist stereotypes. In different ways, this mandate leads to some interesting examinations of cultural identity.

As an example, take the presence of two separate exhibitions of work which take the career of Constantin Brâncuși as a point of departure. In Sequential Strings at the Timisoara Art Museum, the curators address Brâncuși’s Endless Column, a piece constructed in 1938 in the South Western town of Targu Jiu. The works confront notions of infinity, framed as playing off of the formal and conceptual framework of Brâncuși’s sculpture as their starting point.

Elsewhere, at Helios Gallery, Bucharest based curatorial program Salonul De Proiecte have put together an exhibition entitled The Sons and Daughters of Brâncuși. A Family Saga (Act II). Here, the figure of Brâncuși himself is the central element, and his place in the canon of Romanian artists. The importance, or perceived significance of the artist in Romania’s art history was perhaps best articulated by one artist I met at the event, who discussed how Brâncuși and his work were “rammed down [their] throats at art school,” an example of the kind of far reaching influence that aspiring artists in Romania’s art schools should seek to emulate. These works playfully address the kind of deification of the artist, as well as offering a subtle critique of the direction of Romania’s arts education priorities, both pre and post 1989.

Perhaps one of the most visually engaging exhibitions of work is housed in the Memorial of the 1989 Revolution. A former army barracks, the building was turned into a museum with minimal reconstruction work so as to best preserve it as part of the exhibition itself. The works by the platform Avantpost, curated again by the main curatorial team of Art Encounters, are housed in amongst the other pieces and images on display. It adds an element of site specificity to the work, even though the exhibition as a whole was not conceived as a direct intervention/response to the Museum’s displays.

Much of the show reveals an inescapably contemporary perspective, joining stories of Romania’s difficult development from the decline of the 1980s, to the revolution and on through the post dictator reconstruction. It also raises issues concerning the country’s engagement with the wider international community and reasonably recent membership of the European Union, questioning not only Romania’s ‘status’ but also the workings of these organisations. In different ways they speak to some of the inherent contradictions and redundancies that have given rise in the last couple of years to a growing political restlessness across the continent.

A major selection can also be found in Cazarma U, another old military building that has been reconfigured to house 12 different exhibitions from invited galleries. These include spaces like Sabot, Baril, Plan B (Cluj), as well as Aiurart Contemporary Art Space and Suprainfinit Gallery (Bucharest) and ElectroPutere Gallery (Craiova). It is an engaging exercise in bringing together a particular element of Romania’s art scene, and there is some fantastic work housed in the crumbling old brick spaces. What’s interesting about this aspect of Art Encounters however, is the way that galleries take such a central position, not just in Cazarma U but throughout the whole event.

It’s this element of the event which has come under fire by some for essentially rendering Art Encounters an art fair in disguise. It also ties into another noticeable trend: of the performances, talks and workshops, most lean towards either an exploration of Romania’s complicated art history, or reflect the market/collector element of Romania’s art scene discourse. Ultimately it leaves the impression that there is an underlying tension that is hard to shake. On the one hand, the curators have claimed they are focused on Romanian art and it’s frequently unexplored or minimised past and significance. On the other, the presence of galleries and collectors, as well as people representing larger museum collections from galleries like the Tate Modern in London, emphasises the market as central in the discussion. There are also places where it feels like the curation falls into the predictable pattern of mythologising some of the important developments, an exercise in pandering somewhat to Western conceptions of Eastern Europe. The most egregious of these is the prefacing of an exhibition about the Eastern European Zone Festival and other performance art happenings from the early 1990s with the anachronistic title Beyond the Iron Curtain.

During my stay in Timisoara I was lucky enough to speak with a couple of gallerists and exhibiting artists, as well as a number of volunteer staff. All of them essentially gave the same cautiously optimistic review of Art Encounters. Leaving aside the inevitable teething issues any first edition is going to encounter, and allowing for perhaps an overreach in terms of the sheer amount of work on display, at its base Art Encounters presents an opportunity. Future editions however, must find a way to tread the fine line between the market and other non-profit, independently realised projects if they are to really engage with the idea of the event as a Biennale. What people seem wary of is playing host to another example of the ‘festivalisation’ of art and culture that simply seeks to promote the ‘economically viable’ elements of Romania’s art scene at the expense of the engaging, but perhaps less obviously marketable, ‘periphery.’

This article was made possible with support from the Romanian Cultural Institute. 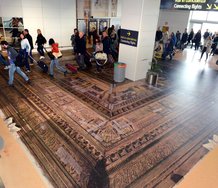