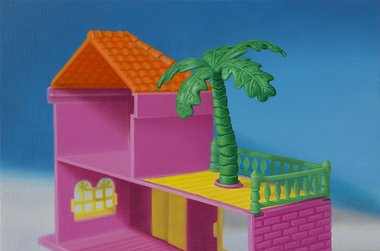 The dollhouse has long been a trope for middle class anxieties and feminine rage. “From now on, forget happiness. Now it’s just about saving the remains, the wreckage, the appearance.” That’s a quote from Ibsen’s 'A Doll’s House' first published in 1879. “Life in plastic, it’s fantastic!” That’s a quote from Aqua’s 'Barbie Girl' first released in 1997. The tempo of Hartley-Skudder’s work is decidedly more Aqua than Ibsen.

What is it that makes today’s dollhouses so different, so appealing? Emily Hartley-Skudder seems intent on finding out. I first noticed her petite paintings of dollhouses and still-life compositions of doll-sized trinkets and toys a couple of years ago. Too cliché? I wondered. Ibsen. Mansfield. Barbie. The dollhouse is no stranger to attention from within Western culture, high and low. Hartley-Skudder is a young woman artist who collects dollhouses, photographs them then paints photorealist miniatures infected with the zeal of a true enthusiast.

Happiness World? At least that’s what it says on the box. Hartley-Skudder’s recent show at Suite gallery featured new paintings of dollhouses she has collected whilst living in America. The synthetic pink exterior of My Happy Family Villa (artist’s rendition may vary) casts skeptical shadows over its vacant backdrop. Meanwhile Crimson Sunroom with Country Blue Chair and Telephone Set and Blue Mezzanine Featuring French Pink Three-Piece are both interiors rendered in vibrant clashing colours. Light beams through the orange windows of the petrol blue mezzanine throwing stripes over the wall and the fuchsia moulded double bed. What dolls could possibly find happiness here? And is the Flamingo Pink Lodge with Feature Palm really an authentic vision of Miami?

The dollhouse has long been a trope for middle class anxieties and feminine rage. “From now on, forget happiness. Now it’s just about saving the remains, the wreckage, the appearance.” That’s a quote from Ibsen’s A Doll’s House first published in 1879. “Life in plastic, it’s fantastic!” That’s a quote from Aqua’s Barbie Girl first released in 1997. The tempo of Hartley-Skudder’s work is decidedly more Aqua than Ibsen. There’s a bit of tongue and cheek but ultimately it’s what’s on the outside that counts. Hartley-Skudder has a special affinity for rendering plastics. I’d also hazard a guess from her choice of dollhouses and her lurid colour schemes that she’s an 80s child.

So just what is it that makes Hartley-Skudder’s dollhouses so different, so appealing? It’s the interplay between the mimetic and the symbolic that gives this sugary artist her bite. The stakes are higher for figurative painters: everyone knows what reality looks like. Which begs the question: what does the imitation have over real-life? The first European dollhouses were handcrafted display cabinets or “baby houses” produced in the 16th century and owned by wealthy matrons. The baby houses depicted idealized interiors and were not for child’s play. The traditional dollhouse imitates upper-class life. “I seen the little lamp,” poor Else Kelvey whispers in the stunning denouement of Katherine Mansfield’s A Doll’s House.

Hartley-Skudder may not have seen the little lamp but she has seen the Fantasy Rose Furniture Set and the Happy Hours 2 in 1 Luxury Cottage. At Suite her paintings were exhibited alongside their real life counter-parts. Three mass-produced dollhouses sat mounted on individual white plinths beneath Perspex boxes. I felt like I was looking first-hand at the artist’s models. (I was.) However it was unclear to me whether the dollhouses on display were an integral part of the work or a showcase of source material. Hartley-Skudder often includes still life arrangements of toys as part of her practice. Why? I wonder if she thinks these tiny-tot installations make today’s figurative paintings more conceptual, more appealing?

It’s not a fashionable time to be a realist. And you won’t see Hartley-Skudder’s work included in Necessary Distraction, the new group painting show currently on at Auckland Art Gallery. (That’s not necessarily a bad thing; maybe she’s just not distracted enough?) The blurb on the gallery website reads: “Through suggestion and proposition the artists invite us into conversations that, rather than being constrained by the ties of narrative painting, are speculative and forward-looking.” Isn’t it a bit presumptuous to assume that all narrative painting is constrained, safe and backward looking? The dollhouse by its very nature embodies the enduring power of the mimetic: I seen the little lamp.