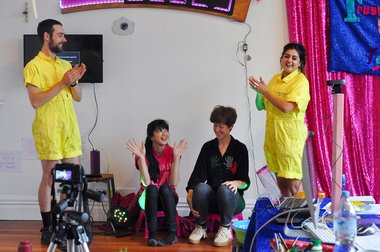 Why did artists Li-Ming Hu and Daphne Simons create this telethon for the lower echelons of the national art scene? Was their residency as Riff Raff a relational project: how to open source your art collection? Or was it a parody of the mysterious ways that art accrues value? Or perhaps a giant riff on the omnipresence of the public programme? These were just some of the questions that flashed across my mind as the telethon was 32 minutes into its duration.

“Denny or not Denny?”

The contestants scrutinized the projection on the wall of Enjoy gallery. They had to decipher the context of an out of focus TVNZ logo.

Jim Barr said it was Denny.

Enjoy Curator and quiz master, Sophie Davis faced the camera in her swivel chair. “It’s not Denny, it’s just the front of the TVNZ building.”

Who wants to be contemporary? was just one of the many events that filled the 12 hour live stream of the Trust Us Contemporary Art Trust or TUCAT telethon. Apparently many people born after 1990 no longer know what a telethon is. Frankly, that was probably the least of Riff Raff’s problems. The telethon  (click here to view) was the endgame of their summer residency at Enjoy Gallery. Their objective: to amass the most ‘stupendously diverse national art collection’ and then offer it as a gift to the Chartwell Trust. The only entry restriction was size. Your artwork couldn’t be too big.

No fear of that. The TUCAT flyer in playful zany fonts hadn’t inspired a mad flurry of donations from known or unknown artists. Turns out most artists want status, prestige and sales. Who is and isn’t in the Chartwell Collection is a badge of seriousness to New Zealand artists, especially to those who are not in the Chartwell. The quiz Who wants to be contemporary? kicked off with an unidentified work from the Chartwell Trust. Who made it? A. John Hurrell.

The quiz was punctuated with in-jokes for hardcore EyeContact readers.

Why did artists Li-Ming Hu and Daphne Simons create this telethon for the lower echelons of the national art scene? Was their residency as Riff Raff a relational project: how to open source your art collection? Or was it a parody of the mysterious ways that art accrues value? Or perhaps a giant riff on the omnipresence of the public programme? Is Riff Raff a reference to the Rocky Horror Picture Show? These were just some of the questions that flashed across my mind as the telethon was 32 minutes into its duration.

12 hours is a long time. Most people don’t spend 12 minutes looking at an exhibition including me. Disclaimer: I didn’t attend the telethon in person.(1) The first skit I saw was Dead White Women. As a title: great. As a live YouTube experience, harder to watch.

I wanted to like this egalitarian show. A telethon is typically held in the name of a good cause, which begs the question is contemporary art a ‘good’ cause? Riff Raff’s open call emphasizing inclusivity seemed like an invitation to get off-brand, a chance for young artists to shake off those New Perspectives blues and pick a platform - any platform.

Pre-telethon, I had attended the opening. Art dotted the wall, the kind of art you make on a budget, the kind of art you make when you’re trying to achieve what’s possible. It looked like an Enjoy fundraiser. I was momentarily dazzled by a small Billy Apple work. His generosity. My god. I later found out from staff that it was actually a work by Josh Hamilton. Hamilton had purchased the Billy Apple and donated his framed receipt to TUCAT. Good on ya, Josh.

The next live skit involved a band playing white noise. White noise is a good choice for the telethon format. But then something happened - a cut away to pre-recorded footage of the Wellington City Chorus singing, “thank you very much for your kind donation.” Their voices were rather heavenly, and I felt a swell of something. Hope? The Chorus shifted everything to a higher tempo.

And Li-Ming Hu and Daphne Simons were such affable and charismatic hosts. I especially enjoyed their rhythmic gymnastics routine to Billy Joel’s We Didn’t Start the Fire. Hu was once an actress on Shortland Street, which explains a lot about why her videos are so easy to watch and has also shattered my stereotypes about the banality of Shortland Street. Last year Hu was offered auditions for two acting roles, the madam of a brothel and a mail-order bride. Instead she made an artwork dressed up as Misal Adnan Yildiz.

Much of the telethon was as to be expected: a university arts degree decanted into the gallery. Poets arrived, “more are in Ubers.” A saxophonist extraordinaire played The Girl from Ipanema to an appreciative audience of teddy bears. Aqualung! In a live crossover from Auckland Piss Cannon took on Born in the USA, their rendition contained more giggling and feedback than the Boss had ever provided. Some puppets did Beckett’s Endgame.

Artworks were unwrapped live on air.

Enjoy Curator Sophie Davis held up a donation from Daegan Wells that had arrived from the South Island. “It’s a plank of wood with what looks like slate bound on to it with wire. Thanks for that Daegan, this is a real treasure.”

Off camera a voice said, “It’s a commentary on Christchurch.”

Wells’ artwork gave me pause. Was it a real treasure or just a blunt instrument? Some of the brave even donated work during the telethon and were interviewed live on YouTube about their wares. Avant-garde art can easily appear anemic under the spotlight. Fortunately, the TUCAT Top Dog competition was easier to judge. Archer the Beagle - “only three years old but he makes up for it in stamina” - botched the obstacle course and was disqualified, leaving Heather Galbraith’s miniature schnauzer Gus as the winner. Perhaps the competition was rigged from the start?

The TUCAT telethon became an affectionate mockumentary of the art community’s id: who’s best in show? During the livestream the instrumental theme song to The Dog Show played in the background as artist Claire Harris demonstrated how to change a duvet and fold a fitted sheet. Her technique was good. Harris said, “You’ll never get it perfect.” She was right. The TUCAT telethon was an essentially daggy enterprise but everyone shared in the fun. “Thank you very much, thank you very very very much.”

62 artworks have now been donated to what is possibly the most stupendously riff raff contemporary art collection in New Zealand. TUCAT has not yet formally offered the collection to the Chartwell Trust but Sue Gardiner did visit the show. Meanwhile New Zealand art school graduates continue to be hounded by one question: “Denny or not Denny?”

(1) I also contributed a short cautionary tale to the telethon which was read out during the live-stream. 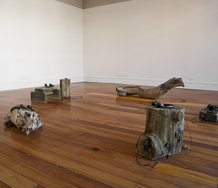 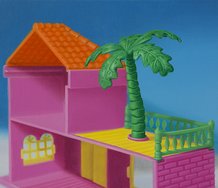