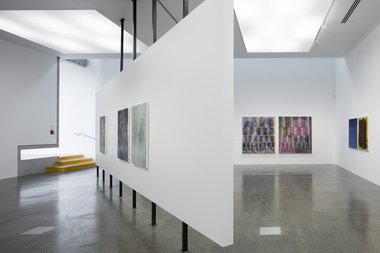 The earlier variety of painting is more convulsive and fractured, with an irregular base stencil, unexpected angles and parallel curves - and different line (negative and positive) thicknesses. The later sort is more regular, often with horizontal ripples or concentric circles and an even, much finer line. The first is destabilising, tortuous and aggressive, the second more subtle and calming. It also optically presents a slightly grey haze.

The recently opened Necessary Distraction painting exhibition at Auckland Art Gallery Toi o Tamaki presents a large suite of solo artist minishows that - with the best (most magnificent) examples - usefully provide foils for a number of related presentations by those same artists in other venues around Auckland. One example is Jeena Shin at Two Rooms. Another is James Cousins‘ Restless Idiom at Te Uru.

Cousins makes (physically) multi-layered paintings that mess with initially recognisable (forest or floral) images so that they become enigmatic ‘abstractions’. What’s convenient - in Cousins’ case - about having these exhibitions simultaneously, is that at Te Uru you can analyse the two periods of 2009-2011 (eight complex works) and 2011-2015 (nine finer lined works), and at AAG you can see five more recent (and even more complicated) examples.

Looking at the hang of the Te Uru show, the square space is divided by a white slash, a slightly unsettling diagonal wall that slices through its centre from corner to corner. The two types of work are evenly distributed around this barrier and not separated. The earlier variety is more convulsive and fractured, with an irregular base stencil, unexpected angles and parallel curves - and different line thicknesses (negative and positive).  And sometimes even horizontal lines sprayed on top again. The later sort is more regular, often with horizontal ripples or concentric circles and an even, much finer line. The first is destabilising, tortuous and aggressive, the second more subtle and calming. It also optically presents a slightly grey haze.

Because of changing developments in Cousins’ ultra-complex paint application process - using finer stencils on which to place the flower photographs on top, and random underpainting (or other stencils) beneath - works like Parks (iv, iii, ii) that seemed utterly wondrous when they first appeared, now seems comparatively coarse and oafish. They’ve been superseded by the more recent, more elegant achievements.

With the later works at Te Uru and the even more recent paintings in Necessary Distraction, Cousins seems to draw together influences as diverse as Polke (layered figuration), Oehlen (mingled compositional blocks) and Riley (shimmering moire surfaces) to create amorphous half-images, forms that are very vague and hard to source - due to the intricate interweaving of these multiple layers.

Cousins’ intermingled strata or levels are very difficult to separate and analyse as painted surface elements. Though finely detailed and delicately linear in their materiality, in an odd sense the closer you stand to them the less rewarding they become - because they befuddle. To avoid vertigo from overload you need to stand well back, so that the physically separated and complex components optically merge in your retinas / brain in a kind of flickering evanescent shimmer. A sort of painting; a sort of optical weaving; a sort of subtle relief sculpture: they defy definition.

Although artists often talk about art as being a means of searching for new ways of creating meaning, here Cousins’ intricate labours are more about sensation and bodily confusion than semiotic juxtaposition or sandwiching. Maybe one leads to the other, by jamming the transmittable codes or cues that lead to image recognisability? Perhaps that scrambling takes us to a new mode of thought that springs out of a reshuffled viscerality.

Te Uru offers an excellent free publication with this Restless Idiom display, a careful and lucid conversation between Cousins and Ioana Gordon-Smith, the show’s curator, that provides a very nice supplement to an earlier, very informative essay by Ruth Watson published in the Signal (Gow Langsford) catalogue of 2009.

These are wonderful shows, bodily and mentally. Well worth investigating.