This year's Biennial was a smaller event than the first one, and that signifyer of total support, the fully illustrated catalogue, was noticeably absent. CAFA itelf is an exemplary venue for exhibitions, discussion and socialising, with or without the added option of associated events at other venues. The dialogue has started. So all that is needed is to keep up the same high standard of challenging offerings, diversify the 'international' content, and involve a wider range of Chinese shakers and movers from inside and outside of academia.

I arrived too late to hear the keynote speech by Prof. Wang Min’an of the Capital Normal University, but noticed that the number of attendees had dwindled from around 200 to 70 on this, the final day of the symposium.

Under the theme of Regionalism and Unfamiliarity in Asia, German-born Carsten Schael gave a clear and vivid account of his first visit to Hong Kong in 1989, noting his sense of wonder and desire to capture visual evidence of the many differences he noticed, such as the extreme mix of old and new, the rich and intense city life, etc. In mainland China he became more aware of the contrast between rural and city living. It was this new ‘visual reality, seeing cities testing the limits of space, building on a legacy of old cities regenerated, as the unfamiliar slowly became familiar, that inspired his more recent work with complex, multi-layered multi-exposure images. (See http://www.carstenschael.com/#item=digiscopic)

Shai Kremer showed work from several series including Infected Landscape, showing the bizarre evidence of many of Israel’s national parks doubling as military training grounds; and Fallen Empires depicting evidence of the failure throughout history of different empires trying to conquer the land of Palestine-Israel. Both series are available as outstanding books under those titles. Kremer also showed distinctive multi-exposure images of New York that appeared to be on a similar wavelength to those of Carston Schael’s Hong Kong composites.

Next up was Gu Wenjia, a recent graduate from the China Academy of Art, who spoke about the development of documenting his own locality when he moved from a ‘small’ city, Changsu (pop. 1.3 million), to Hangzhou (2.4 million) and then to Shanghai (more than 15 million), noting that the sheer size of each place forced a different approach. Chronologically, like Schael’s, his images became more abstract in form, and he is currently combining multiple exposures from different cities to indicate the impossibility of documenting such large localities in traditional ways.

Gu was followed by Guo Guozhu who showed work from The Entrance Hall, a series of images of the entry points of newly built, unfinished and unfurnished apartments in a small relocated Hangzhou, Zhejiang village. These bleak welcome areas remind one both of the lived-in environments people come from, and the hoped-for promise of improved living conditions in new surroundings.

The fifth speaker, Niu Guozheng, said little but filled his 10 minutes with a rapid slide show of what must have been near 500 images - to notable applause. The 60 year old is an outstanding and prolific photographer with a strong social conscience and graphic sense as well as a sense of humour. His photographs of prisoners made between 1987 and 1997 were among the most poignant works in the exhibition.

Questions raised during the panel discussion included “Have we learned enough from the West?” Somebody asked a panelist what his thoughts were on contemporary Chinese photography and got the succinct truth: “It shows a broad range of work from raw to sophisticated”. Another questioned why the subjects [people] in the photographs were not present at the symposium? In answer to “What [who] are Korean artists?” the answer given was “those who do work that only Koreans can do.”

Seeking an identifiable ‘Chinese style’ of photography - their version of the nationalist-internationalist debate - seemed high on the Chinese audiences list, as did the use of ‘Asia’ when they were really only thinking of China. So, rather than ask a question, I felt compelled to observe that we are people first, then Asian, or European, or whatever. Secondly I suggest that “culture” grows from a set of habits that combine different and similar characteristics that can and do change over time. Photographers are individuals dealing with specific aspects of life as they see it.

Among the points made by critic Duan Jun, moderator of this final session was that artists were in the best position to talk about their work, and - back to politics - that unlike the European Union, he did not think there would ever be a similar Asian Union.
In his presentation Boaz Ahronovitch talked about his way of combining images from different periods to give multiple perspectives on a theme. An early work (2006) combined a landscape made during his honeymoon in Israel, smoke from a Palestinian protest about the Israeli occupation, and an image of a parachute from World War II. Working with the same concept his work has become more complex and painterly in form, much larger in scale, and the sources of his images more diverse and difficult to discern.

Next up was Wang Qingsong, known for his elaborate large scale tableau which move from pseudo historical themes to contemporary issues such as education, consumerism and nationalism. A modern day Cecile B. De Mille, he showed a video about the making of Archeologist, and other extravaganzas. He said that his creative work was based on his own experience of personal life. Maybe, but his three-meter long print, ICU (2013), of an imagined aftermath of a surgical operation seemed over-indulgent to me and one of his least successful images. His other image in the exhibition - a map of air routes to and from China from the rest of the world was more interesting. It was made on his computer without a camera, and only the most tenuous link to photography via digital software and printing.

The work of Liu Xiaofang, a graduate of the Beijing Academy of Fine Arts, was familiar through the delicate, gently haunting work featured on the catalogue cover of reGeneration: Tomorrow’s Photographers Today (2010),(2) an internationally travelling exhibition curated by William Ewing for the Musee de I’Elysee, Switzerland. This also included the new work of New Zealand’s Elam graduate, Geoffrey H. Short, Towards another (big bang) theory. The silence of waiting in Liu’s work could hardly find a noisier counterpart than in his dramatic explosions. In terms of Asian Wisdom Liu referenced the influence of Buddhism and the concept of finding peace in emptiness, and of the spiritual essence of T’ai Chi. She did not approach her work as a photographer, she said, and tended to keep her negatives for a long time before processing them, then used modern techniques of post production to complete them.

Yang Yueluan, whose book China - Great Wall Vestiges (2012) is one of the very best of a large number of books on what he called the longest architecture in the world, was next up. He gave a brief historical account that acknowledged the role of foreigners such as William Edgar Geil, considered the first explorer of the Great Wall of China (1908) and William Lindesay, who followed in Geil’s footsteps a century later, in helping to preserve important remains. Yang’s own images, rendered in crisp black and white, portray many lesser known points on the wall as it crosses Hebei Province to the sea in the east.

The next speaker, Zhou Mingying, showed excerpts from his documentary film, Land of the Peach Blossoms, about the struggle of a flower company to stay afloat. He drew attention to how many aspects of China today are still relatively unknown and waiting to be explored.

To emphasise the value of following one’s own muse for personal discovery, the final speaker, Zheng Chao, a recent graduate of the Hubei Institute of Fine Arts, now residing in Quanzhou, Fujian Province, showed work from his End of the road series, for which he literally followed roads to their end and discovered many unexpected and often surreal scenes.

Despite the sense of weariness felt in the room after so much talk and new images and ideas to absorb, there were still some tough, pointed questions to be made after the panelists’ presentations, especially about the issue of freedom of expression for artists in China. One panelist answered that he thought that despite the disapproval of some government officials for the anti-pollution work of photojournalist Lu Guang, or the critical nature of Wang Qingsong’s work, he admired both of them because their work was based on their love for their country.

Asked specifically about the meaning and intention of his work, ICU on exhibition, Wang Qingsong said it was about over-medicalisation in the health system, and materialism. The Chinese, he said, are so afraid of the poor days returning, that they now over consume, and materialism has brought damage to their value system. Another speaker commented on how the media also presented these distorted values, and that it was best for artists not to be attached to any organisation.

At the conclusion of his catalogue introduction, Wang Huangshen, the Art Director of the Biennial expressed the view that “All of these events will promote dialogue and exchange between the Chinese and international photography and cultural worlds, pushing Chinese photography to new heights in 2015.”

That certainly did happen - to a degree - and there is no denying the value of connecting with unfamiliar people, ideas, and images, especially at the highest levels. This year’s Biennial, however, was a smaller event than the first one, and that signifyer of total support, the fully illustrated catalogue, was noticeably absent. CAFAM itelf is an exemplary venue for exhibitions, discussion and socialising, with or without the added option of associated events at other venues. The dialogue has started. So all that is needed is to keep up the same high standard of challenging offerings, diversify the ‘international’ content, and involve a wider range of Chinese shakers and movers from inside and outside of academia. To broaden the pool of participants and viewers it is absolutely essential to publicise all associated events well in time and actively involve staff amd students from other tertiary institutions in China, and perhaps abroad as well. The Third Beijing Photo Biennial, in 2017, should really be something to look forward to on the international calendar. 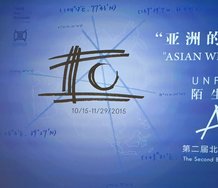 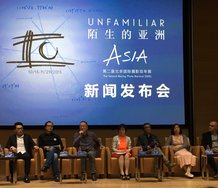 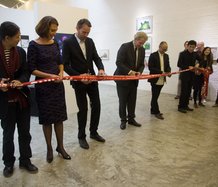 The Dutch in Beijing