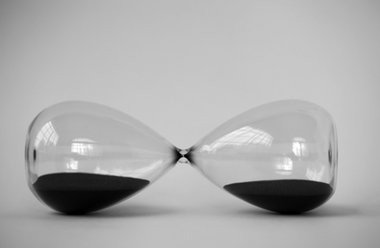 The work of a dozen artists, that makes up this group exhibition, looks at the finality of mortal expiration and features very little chromatic or saturated colour. Apart from two or three linear items, it is mainly tonal and preoccupied with darkness and lack of light. The title comes from a line by novelist Gabriel Garcia Márquez.

The Authority of Death

The work of a dozen artists (linked to the Fox Jensen exhibiting programme) that makes up this group exhibition, looks at the finality of mortal expiration and features - as you might expect - very little chromatic or saturated colour. Apart from two or three linear items, it is mainly tonal and preoccupied with darkness and lack of light. The title comes from a line by novelist Gabriel Garcia Márquez.

Three of the artists deal very specifically with the colour black. Gunter Umberg (Germany) has a gorgeous monochrome of matt black painted on a canvas on a stretcher with sides that are angled so they rest on the wall well behind (and inside) the front surface. The paint has no sheen whatever, so it looks like a void, with no surface seeming (from a distance) to exist. In contrast Gabriel de la Mora (Mexico) has a square slab of (partially hollow) obsidian that is highly reflective, while Spencer Finch (USA) has a suite of seven pastel-drawn squares that are made of coloured blacks, subtle ‘impure darknesses’ that slowly reveal their chromatic origins as your eyes adjust.

Others look at the properties of time. Coen Young (Australia) has a characteristically evanescent ‘black mirror’ work where the darkening of the silver nitrate and marble dust caused by washes of water and stilled by varnish becomes an allegory for aging, and there are four more works by Gabriel de la Mora (three partially incinerated and disintegrating, smoke-caressed canvases encased in clear Perspex boxes, and a large horizontal egg timer with sparkling grey sand).

Some others are more literal. The great American painter, Eric Fischl, has a marvellous bronze sculpture of a woman falling over, her feet in the air, while Jude Rae has two elegant etchings of animal skulls. They seem to be of a dog and cat. There is also a calligraphic Bruce Nauman (USA) drypoint etching of his own profile, drawn in horizontal alignment. And an eerie, subtly coloured, James Casebere (USA) photograph of delicately grey, dusty hospital beds casually stacked up near some steps. Plus a suite of Richard Barnes b/w photographs of the rudimentary cabin where the Unabomber (Ted Kacyzynski) created the lethal letters he sent to sixteen scientists.

There is also a coloured photograph by Spencer Finch of dusky light disappearing behind the silhouette of a gnarly apple-tree.

Winston Roeth (USA) has a hingelike work where two rectangular, dark blue, panels in a corner, framed in chromatically modified blue borders, look as if they are about to snap shut, while Tomislav Nikolic (Australia) has a black framed, pale marble dusted canvas float-mounted in a narrow trough with goldleaf sides, a metaphor for a valued life ‘book-ended’ by death. Life as a journey through a tunnel is also expressed in Swiss artist Helmut Federle’s vegetable oil circle painted directly onto canvas: tube as a conduit or thoroughfare, or circle as a cross-section of an eternal, recycling trajectory (metempsychosis).

This elegant, contemplative show is full of surprises and has to be encountered in person. The tones and hues are very subtle. Inventive and exceptional.