Examining the Politics of Institutional Taste 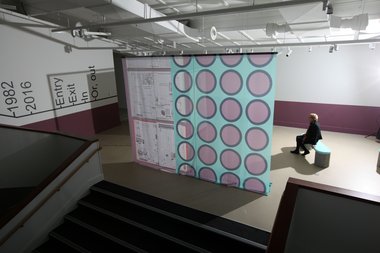 As you wander up and down and across the three differently levelled floors, bodily manoeuvring your way between the different ‘props' on this ‘set', your vision moves into deep space (distant vistas of the complicated architecture), optical deep space (say, the receding perspective of the large Don Driver work on gallery four), shallow space (the walls presenting the time lines) and optically shallow space (the newspapers ‘hanging' in parallel behind the grids).

Ruth Buchanan has a high exhibiting profile in this country at the moment, with a show recently completed at Hopkinson Mossman - and two other presentations (one an organised group show) still on currently in the Adam and Govett-Brewster Art Galleries. The Govett solo exhibition - the result of a three month residency - involves three floor spaces, three works by other artists incorporated from the Govett-Brewster Collection, three suspended gridded charts looking at a public debate on collection policies, and three different vinyl-cut time lines running along three sections of wall. These time lines are a schematic synthesis of poetry, history diagrams, flowcharts and text books on grammatical syntax.

The focal point of the exhibition is a 1982 event when the then director Dick Bett put the entire Govett-Brewster collection on display - via a salon hang - for close scrutiny, and proposed that four varieties of contemporary art could be retained: Art from Taranaki: eg. the chosen work from Tom Kreisler, The Key (Coat III) 1970; New Zealand sculpture: eg. Greer Twiss’s Red Legs (1968); non-figurative painting: eg. Don Driver’s Five Part Piece (1972); and finally, the work of Len Lye: eg. his film, Colour Cry (1952) - presented in the exhibition next door. The rest could be de-accessioned.

The suspended banners - each with gridded rows of circles or portholes - that dominate the spaces seem to represent the New Zealand contemporary art community beyond New Plymouth, with circles on the righthand side laid over screened local newspapers reporting this local art debate about collection policy. On one floor there are five stools (obviosly for visitors to sit on - but also symbolic), each with the same diameter as the rings, a reference to the monads that collectively make up a community.

Selected chunks from the Daily News and Taranaki Herald reports of the conversations between earlier gallery directors, councillors and members of the public were edited by Buchanan into a set of readings. They are a bit a bit like minutes. These were read aloud in gallery two (for two hours daily) from tablets by the gallery staff. In my view this is the weakest part of the show as it requires the expertise of professional actors. Most gallery staff don’t have the skills. Why should they?

Buchanan’s title emphasises the distinction between an art object (its experienced physical properties) and the cultural impact it might make over time as recorded in documentation and written debate. Therefore both entities are examined in her display. Described in a card printed for the show as a relationship of ‘Split / Splits / Splitting‘, the art object itself is noted as subject to the social processes of ‘Access / Exchange / Mediation / Biography.’

The last term, for example, Biography, fits in with Buchanan being born in New Plymouth in 1968 and her family living there from 1970-82; With the gallery opening when she was two years old, she might well remember the venue and the three selected works from her preadolescent childhood. With Access we have the bodily experience of directly encountering the picked works on display, and with Mediation, the newspaper reports that might influence our thinking about the items’ context, as might the local art community (the banner). Exchange, of course, refers to the suggested selling of ‘irrelevant’ and rejected works from the collection.

As you wander up and down and across the three differently levelled floors, bodily manoeuvring your way between the different ‘props’ on this ‘set’, you possibly consider these treatments of the ‘actual’ - though they are not really that explicit. Your vision moves into deep space (distant vistas of the complicated architecture), optical deep space (say, the receding perspective of the large Don Driver work on gallery four), shallow space (the walls presenting the time lines) and optically shallow space (the newspapers ‘hanging’ in parallel behind the grids).

This process appears to be a metaphor for ‘seeing’, not for mentally visualising but for acknowledging the codes that accompany most (all?) contemporary art, for accepting the contemporary art community’s thirst for intellectual stimulation and inquiry, and for sympathetically considering certain notions of ‘quality’ (from varied sources) within any carefully selected array of acquisitions.