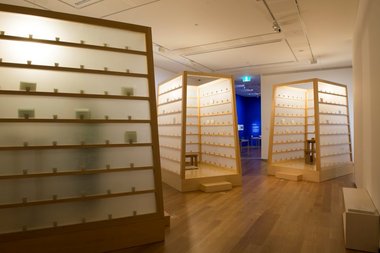 Interestingly, there is little to no mention of Nicolas Bourriaud's relational aesthetics of the 1990s, a movement which re-examined social contexts and personal relations in art and which was the precursor to much participatory work of the last few decades. Or to the overt social activism and politics of much contemporary art since relational aesthetics.

Lee Mingwei and his Relations: the Art of Participation

If you think about it, all art is essentially nothing. It only becomes something once it is experienced - listened to, seen, engaged with. In this way participation is, by definition, fundamental to every artwork. Lee Mingwei and his Relations: The Art of Participation is an exhibition which takes this realization one step further, in its use of participation and human relations as artistic material.

The show starts with Family Photographs (2014), a series of framed photographs of the artist’s family - literally, his relations. The series focuses on his grandparents who, though from Taiwan, studied in Japan with many of the photographs being group portraits of them alongside their fellow students. Lee contextualizes politics and society - in particular, the end of Japanese rule over Taiwan - through the individual relationships his grandparents formed during the 1920s-1930s.

This work is set opposite a print of Nei-Jing-tu (View of the Inner Dimensions) circa 1644-1912 by an unknown artist. This print maps the inner cosmology of the body, the chaos of the internal world made external. Through confounding the microcosm of the human body with the macrocosm of the outer world the work signals that just as we are a part of our environment, our environment is part of us - there is always a relationship in which we are participating. These kinds of Zen Buddhist concepts are integral to Mingwei’s practice and this print acted as an effective precursor to the rest of the exhibition.

The exhibition then segues into The Letter Writing Project (1998/2016), where participants are invited to kneel, sit or stand and write letters of ‘gratitude, insight or appreciation’, as well as to read the unsealed letters left by previous visitors - any letters sealed and addressed being sent to their recipients by the gallery staff. The pale wood and semi-transparence of the structures built for this activity, the quiet of the gallery space and the ritual of taking off one’s shoes, makes this experience feel akin to that of visiting a temple. We’re invited to see this quotidian action as a spiritual ritual and a coming back to oneself. Having returned to the exhibition for a second time, the ritual of this felt particularly powerful. I had new things to say, new people to write to, and I felt myself falling out of a novel experience and into a practice of ‘forgiveness, gratitude and insight.’

Following this is Works for Relationality featuring pieces by John Cage, Lee Ufan, Allan Kaprow, Yves Klein and various Zen practitioners. Although not all direct influences on Lee, we are invited to experience ‘the resonance’ of these works, which tend to emphasize the invisible and immaterial. The Sleeping Project (2000/2016) plays with dreams, sleep and rituals. In it, two beds are set up and participants enter a lottery to sleep in the space along with the artist or a host for a night. Participants’ nighttime effects are then left behind on a nightstand. Here is a participatory project in which we know only a very select few can take part, reflecting the lottery that is life and the fact that we cannot control or pin down its outcomes or magic.

Finally, in The Mending Project (2009/2016) I had a garment of mine repaired by a host, Benny - our brief encounter forming part of the work. The repair was made intentionally visible, using a number of colourful threads in a loop pattern. Benny explained that the repair is made apparent as the artist is interested in celebrating wounds, reflecting the Zen emphasis on reconciling ostensible opposites. The repaired pieces of clothing that are left behind are linked by a thread to spools hung on the wall - echoing the fragility of the threads that bind us.

The curator, Mami Kataoka, has chosen to contextualize Lee’s practice within a select genealogy of artists, thinkers and religious leaders whose work is characterized by Eastern thought, engaging in such concepts as the self, heaven and earth and immateriality, often through using participation. We see a unique approach to this survey exhibition as a result.

Rather than just an overview of the artist’s work, we’re asked to consider the development of a particular use of participation and social relations, with Lee being situated as a contemporary of this lineage. Interestingly, there is little to no mention of Nicolas Bourriaud’s relational aesthetics of the 1990s, a movement which re-examined social contexts and personal relations in art and which was the precursor to much participatory work of the last few decades. Or to the overt social activism and politics of much contemporary art since relational aesthetics. Rather, the curator considers this exhibition an experiment in “[breaking] away from the restricted discourse surrounding participatory art since the 1990s.” (1) Thus, while on one level we are experiencing Lee’s work, art history is also being proactively made here.

While informing our viewing, this approach does lead to a very full space to some extent anathema to the themes of ‘nothingness’, ‘emptiness’, and simplicity, which are definitive of Zen Buddhism and so evident in Lee’s works when experienced in isolation. This fullness is only exacerbated by the inclusion of works from Auckland Art Gallery’s permanent collection throughout the exhibition. However, the artists and practitioners that are included in The Art of Participation do enable us to see the strategy of participation through a valuable alternative paradigm. Like Klein, Cage et al. Lee is not attempting to achieve any substantive social or political aims. Rather, through monumentalizing activities such as sleeping, dreaming, mending, writing a letter, gift giving and eating, and re-presenting them as art, his work teaches one how to live through a Zen paradigm of being present to the everyday - connected to others, oneself and the vast potential and infinitely variable texture of the now.

(1) Lee Mingwei and his Relations: The Art of Participation - Seeing, Conversing, Gift-Giving, Writing, Dining and Getting Connected to the World, Mori Art Museum: 2015, p. 31.