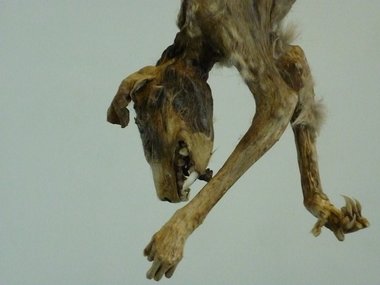 Animals predominate in the show in bizarre and nightmarish guises, the most disturbing being Bryan Hobbs-Crowter's Mummified Opossum strung up by its tail from the gallery ceiling and still exhibiting small stuffs of fur along its emaciated dry skin back. Elements of the opossum morph under bell jars: (a paw sporting a ring or holed up inside a snail shell). The beautiful and the bizarre trade places, become bed fellows.

Where do all the art movements go when they die? Most of them make it to the pearly gates of art historical treaties: serious mimeographs; weighty library tomes on the subject.

One of them, however, never got the Grim Reaper’s call. Surrealism is that eternal, forever young and malleable practice which gets rejuvenated from time to time, resurrected to live the good life in art studios and teaching institutions up and down the land.

This is evidenced in a current exhibition at Skinroom gallery, Hamilton. Called Fluff, it works the title both literally and on a more metaphorical level with an array of paintings, sculpture, prints and found objects in various states of collaged construction and collision.

Indeed, as if to stress the point, Ruth Swartzberg produces a series of tiny 3D portraits in modelled clay, collectively called Surrealists. I think I identified the heads of Max Ernst and Dorothea Tanning among the twelve that were pinned on the gallery wall, arranged in a gridded format, like exhibits of dead butterflies impaled under glass. Whether in homage or as satirical jibe, or both, these small comic-book type ceramics tip the hat to the Surrealist movement in a small modest gesture that says, thanks for the memories - while acknowledging that there is enough juice left in the system to allow the legacy to still be mined.

In another series along the same lines, she conjures up another art movement, this time the pre-Raphaelites. But in good postmodern quotation - with the ubiquitous touch of irony - the artist calls them Post-Rafaelites. Parody, playfulness and pastiche abound. The placement of these disembodied heads in the gallery reminds one of stuffed heads mounted and affixed to walls in stately houses. This mounted format becomes a motif in the exhibition as a whole.

The cast wax creations by the same artist present a similar trope - the trophy - again complete with the standard wooden mounting frame. The heads this time are from Beatrix Potter - all the children’s favourites are present: Squirrel Nutkin, Jemima Puddleduck, etc, staring out at the viewer, like the ‘stuffed’ animals they’ve become. Here their makeover comes with a suggestion of violence - something shot, decapitated, then off to the taxidermist for preservation. Is the artist confronting Freudian attachment to childhood whimsy and innocence and dealing to it, a statement of overcoming, or something more benign - a memento mori associated with a narrative now lost to the age of experience?

Swartzberg’s Big Bad Wolf series (ink on paper) reveals how often the wolf is presened in childhood rhymes and tales as the bogey man and adversary - a figure of fear and nightmare. The association of children’s ‘innocent’ tales with the lurid and traumatic is underlined here.

Animals predominate in the show in bizarre and nightmarish guises, the most disturbing being Bryan Hobbs-Crowter’s Mummified Opossum strung up by its tail from the gallery ceiling and still exhibiting small stuffs of fur along its emaciated, dry, skin back. Elements of the opossum morph under bell jars: (a paw sporting a ring, or holed up inside a snail shell). The beautiful and the bizarre trade places, become bed fellows.

Equally perturbing is Antoinette Ratcliffe’s real stuffed duckling with garnet eyes. There’s something of Victor Brauner’s Wolf Table (1939) in all of this, but where he had context, (the beginning of World War Two and the advent of Nazism), it is difficult to likewise place the fluff creations. There is certainly shock value here, but to what end? Is this just gratuitous rebellion, something like the Chapman brothers who vigorously disown any redemptive quality in their low-rent black-humoured tableaux, or is there a larger social/political context in which the work operates? If so, it needs to be at least suggested.

The Dadaists were provocateurs par excellence, but they had World War One and all its obscenity in their sights. Georgia Clarke’s digital prints that depict ‘Goats in Suits’ are humorous in themselves, a trope that’s been done many times, but her real life goat skulls, painted in acrylic, Peculiar Minds, are another matter. (Interestingly it’s become fashionable for the well-to-do to mount goat skulls and others on to their well-appointed walls - the latest must-have to finish off any well respecting interior décor.)

The piece de resistance though would have to be Ratcliffe’s mounted white bunnies, made of plaster and presented as being attacked, vampire-like, by butterflies and bees. The rabbits are reminiscent of all those cute 1950’s ceramic ornaments that decorated dressers and window pelmets back in the day. They also recall the needle felt sculptures of American artist, Zoe Williams, where Pop and Surrealism fused in a hybrid concoction.

Lynda Wilson chimes in with two found objects, ornamental objets d’art of charming deer which she partially covers with crochet and embroidery. Called No Idea and Hidden Ideas, the subversive play with bourgeois nick-knacks and baubles continues the saboteur theme of the show.

Fluff here takes on a critique of the frivolous, the puerile and the sentimental inherited from the Victorian period. However the epitome of creepy would have to be Hobbs-Crowter’s gathered balls of human hair placed in large round glass containers.

Do I See Hair in the Future? is the enigmatic title to these unnerving, hair-raising, even sinister creations.

Gratifying? It depends on where you’re standing.