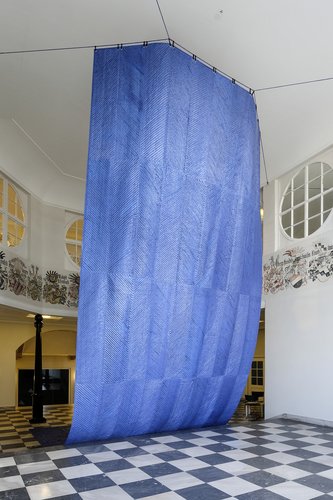 Alongside the curatorial current in Kassel that wrestles with the geographic, economic, political, and cultural separation between the two host cities, runs an underlying, and perhaps more pervasive, thread that offers a broad colonial self-consciousness. From explicit references to violence, genocide, and slavery, to art practices and storytelling traditions that narrate adjacent world histories and art histories, this selection of artists and works pursues a self-aware confrontation of the historic and present realities of global imperialist legacies.

During the busiest month of the international art calendar, documenta 14 opened to the public in its hometown, Kassel, Germany, on June 10th. This followed the April inauguration of the Athens chapter of the first ever twin city edition of the esteemed quinquennial exhibition. Another first at this year’s documenta is New Zealand’s artist representation. Nathan Pohio and the Mata Aho Collective are among the 160 plus practicing international artists selected to contribute new works, as well as a 1970s work by the late Ralph Hotere joining a host of other historical works from recent global art histories.

Alongside the curatorial current in Kassel that wrestles with the geographic, economic, political, and cultural separation between the two host cities, runs an underlying, and perhaps more pervasive, thread that offers a broad colonial self-consciousness. From explicit references to violence, genocide, and slavery, to art practices and storytelling traditions that narrate adjacent world histories and art histories, this selection of artists and works pursues a self-aware confrontation of the historic and present realities of global imperialist legacies. Part of this self-consciousness is behind a concerted effort by the curators to seek out works by indigenous artists. Here is one clear curatorial lens through which the artists and works from New Zealand are set up to be considered.

With the exhibition in its 14th edition, the city of Kassel is well rehearsed for its five-yearly takeover by the contemporary art world. Spread across 30 venues and locations, documenta occupies nearly all of the city’s public museums, often housing works that respond to or juxtapose their historic temporary residence. This year’s programme includes notably fewer outdoor sculptural works than in 2012, and with that, fewer gestures of imposing scale. Nathan Pohio’s work, Raise the anchor, unfurl the sails, set course for the centre of an ever setting sun!, 2015, stands on the grassy terrace of Weinberg, Kassel’s only hill, overlooking the city. Originally commissioned for the SCAPE Public Art Biennial in Christchurch, it is appropriate that Pohio’s five by eight meter light box remains a freely accessible public sculpture in Kassel. The work, appearing like a film still with its cinematic dimensions, is a reproduction of a photographic press image from 1905, capturing a posed moment in which Lord and Lady Plunket, the British-born New Zealand Governor and his wife, were welcomed by Māori leaders on horseback in full ceremonial dress in Tuahiwi, Canterbury, home to Ngāi Tūāhuriri.

Across the documenta venues, archival exhibits and documentary photographs are recurrent modes of representation that lend, refresh, and create new perspectives within current contexts. An installation by Dakar-born artist, Pélagie Gbaguidi, contains photographs by South African photographer, Peter Magubane, that capture violent memories of apartheid, covered with translucent white paper. The fogged images, displayed on school desks, stand in for the collective process of forgetting in history, a process that Gbaguidi emphasises only education and knowledge circulation can undo. Maret Anne Sara, a Sami artist from Norway, employs a historic photograph of a trophy mountain of buffalo skulls from North America in her installation that illuminates the unjust laws of forced reindeer culls in Norway, which affect the livelihood of Sami reindeer herders. Sara borrows the weight of the archive to draw parallels between the more widely-known atrocities committed against First Nation Americans and the struggles her community faces. The obvious staging of Pohio’s appropriated photograph also nods to a deeper story. Despite the formal hospitality of the pictured greeting and the welcoming ceremony that followed, this image documents the day that the Ngāi Tahu land claim was brought to Crown representatives. Yet, rather than solely calling on the image to reveal what lies beneath, Pohio also finds its worth at face value, in the hospitality extended through ceremony and ritual that is inherent to Māori culture.

The passing on of knowledge and non-written forms of storytelling feature in many of these works. For their huge woven textile work, the Mata Aho Collective (Erena Baker, Sarah Hudson, Bridget Reweti, and Terri Te Tau) worked alongside and learnt from Maureen Lander, an esteemed artist, weaver, and teacher whose work combines traditional practices with perspectives on contemporary Māori politics and culture. Kiko Moana, 2017, is rendered in bright blue tarpaulin and hangs from the ceiling in Kassel’s regional museum. Catching light from the windows and rippling down a small set of stairs, the blue tarpaulin references both the typical watery dwellings of a taniwha and the everyday consumer materials that have become commonplace in contemporary Māori life. The concept of the work is accompanied by the group collecting taniwha stories from friends and family. Like Pohio’s work, their presentation of the colonial impact on Māori ways of life is not necessarily dominated by pessimism. For the collective, the chosen materials signify that even in a changing world, the traditions and practices that make up a cultural heritage are kept alive through intergenerational exchanges and enduring narratives.

The historical consciousness of documenta 14 comes to a head at the Neue Galerie, described in the Kassel map booklet as “the site of documenta 14’s memory”. This memory crosses continents and time periods, hosting a gigantic selection of mostly historical works. Among this vast selection is where Ralph Hotere’s Malady Panels, 1971 series is found. The series of seven mostly black paintings with fine rings of colour and barely visible text are Hotere’s response to a poem by New Zealand poet, Bill Manhire, consisting only of the words ‘melody’, ‘malady’, and ‘my lady’. The panels dominate a corner room of the gallery’s second floor, with their combined size and rich blackness demanding attention amidst room after room of mostly smaller works. Opposite Hotore’s panels are a set of small drawn microtonal music studies by Russian avant-garde composer, Ivan Wyschnegradsky, in a glass vitrine. Apart from the use of colour, circular shapes, and a reference to music, the pairing of the two artists and works seemed a little arbitrary.

The breadth of perspectives at documenta 14 is certainly impressive and denotes a distinct awareness of a responsibility to counter historic and contemporary trends of an art world imperialism. However, the almost encyclopedic grouping of works inside the Neue Galerie risks defining these artists by what they are not, which is part of the western canon. In this setting, some of the artists selected for their contribution to alternative global art histories seem plucked from their own historical contexts. Ralph Hotere’s career stands out in New Zealand for both his Māori perspective and his work’s distinctly sophisticated and international character. It’s hard to say how I would encounter and absorb Malady Panels at documenta had I not been already familiar with them and their local context. The exhibition charges these works with the job of countering a dominant colonial narrative, yet without the autonomy granted to works such as those by Pohio or the Mata Aho Collective, they are coerced into the role of helping to define it.

Didn't the Guardian art reviewer slam this for being a shambles. Said something like the politics overwhelms the art or ...

Didn't the Guardian art reviewer slam this for being a shambles. Said something like the politics overwhelms the art or something?