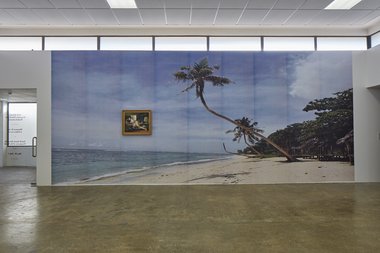 We have here three simultaneous shows: one (Kihara) in the main square part of the gallery, another (Smuts-Kennedy) in the narrow south-facing rooms opposite the entrance, and the third (Te Ao) in the long oblong projection room running along the side (opposite the office). The second and third shows seem to share a commonality in mysticism, but the first seems out on a limb, with very different preoccupations, looking at the gaze and juxtaposing contrasting media.

We have here three simultaneous shows: one (Kihara) in the main square part of the gallery, another (Smuts-Kennedy) in the narrow south-facing rooms opposite the entrance, and the third (Te Ao) in the long oblong projection room running along the side (opposite the office). The second and third shows seem to share a commonality in mysticism, but the first seems out on a limb, with very different preoccupations, looking at the gaze and juxtaposing contrasting media (each initially with different production pleasures and motivations beyond the ocular).

In that show, Yuki Kihara‘s presentation examines famous ‘masterpieces’ of the west (usually naked white women reclining in positions of sexual availability), and replaces the top (or bottom) half of the painted unclothed model with sepia coloured photographed equivalents of colonised Samoans. Kihara’s expert fitting of scale and matching of rendered body parts (across media borders) is related to similar methods of ‘mutant’ image production by artists like Christian Marclay and John Stezaker, while conceptually her practice is related to the paintings of Kehinde Wiley, who likes to insert anonymous people of colour into privileged European aristocratic settings.

The recontextualising of cultural and bodily characteristics here - via juxtaposed representations and different technologies - certainly intrigues, and one wonders how they would look modified, based on either the original size of the reproduced painting or the reproduced photograph, with the other component suitably adjusted in size to match. Would their initial claimed meaning of exploitative voyeurism (if it exists) change? Would their putative meaning also change if instead of using photographed reproductions of painting Kihara used real oil paint, or plastic embossed printing (mimicking the thickness of each brush mark) enabled by laser and digital technology - or perhaps flipped the concept over to use paint to mimic the original photography. If McLuhan was right, and the medium is both the message and the massage (ie physically caressing the viewer), how do these hybrid images operate? Is the ideational cohesion that Kihara assumes really possible?

Shannon Te Ao‘s very different contribution is also in two parts, but separated spatially. His video, te huka o te tai (the foam of the sea), made with Iain Frengley, shows a video alternating on two sides of a double-sided screen. One screen shows thermal steam rising from fissures in low lying, bush covered hills, just as morning cloud or damp mist is descending and covering the undulating forms. Sky and earth appear to merge.

The other screen shows an artist drawing with charcoal on sheets of newsprint that have rumpled paper sheets underneath. He is making an imaginary landscape. The hidden folded edges help contours appear (as frottage) when using the sides of the charcoal, and the whole process has much in common with Te Ao’s early documented outdoor performances, and indoor videos like a torch and a light (cover). With this work though, he (unusually) does not recite a waiata.

Sarah Smuts-Kennedy‘s installation focuses on an installation of blue glass bottles which are positioned on window ledges or brass holders at different heights. They hold drinking water in which ash from the Vedic ritual agnihotra is mixed and made available for those who enter. The back rooms have been modified to support a relaxing ambience for meditation and relaxation. Artspace visitors can contemplate a set of vertical brass sculptures with horizontal bulbous glass forms and a quartz crystal Herkimer ‘diamond’, walls painted with pigment coloured with a 454 wave length, and a melodically chirruping Tui that Smuts-Kennedy has videoed in her “biodynamic, permaculture teaching garden.” They are encouraged to explore the quite intimate installation one at a time, to enjoy the allegedly vibrating frequencies and healing fields of energy she enthuses over. A harmonious, crystal-powered hippie cosmology all over again.