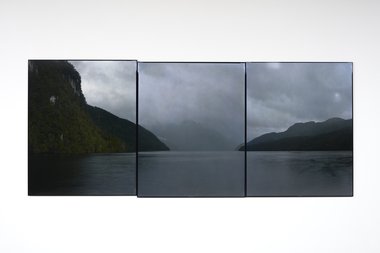 In a sense, with this work, Adams is going back to the beginning - the beginning for us Pakeha - of significant first contact, when the seeds were sewn for a new society, a unique combination of indigenous Maori and colonising European. As with communism, the project had its noble intentions and some memorable achievements, but on the whole it was a messy business involving much misunderstanding, compromise and exploitation.

In two years’ time it will be two and a half centuries since James Cook’s Endeavour first appeared over the horizon from the north east. What to call this 21st century event - is it a celebration, a commemoration or an observance? - indicates a certain ambivalence about how this historical fact squares with us in the here and now. An aspiring art historian in Gisborne has indicated the dilemma: she’s suggested it’s a reassertion of “the dominant narrative”. The Te Ha Trust, set up to promote and manage associated multi-cultural events around New Zealand through to 2019, has a slightly more optimistic and less doctrinaire take on proceedings. We’ll see how it all pans out - an observation which could well serve as our national motto.

The ‘national history’ as retailed in the School Journal for the baby-boomer generation was a simple story of Pakeha-lead discovery and progress, a ‘dominant narrative’ indeed. For all its faults, it was the same generation that began to recognise the validity of other stories and - under pressure, admittedly - allowed the deconstruction of a meta-narrative, the dismantling of which remains a work in progress.

There’s a joke from the Soviet era which supposed that biological technology had advanced to the stage where the dead could be restored to life. The obvious first experiment was on the Lenin corpse lying in his vast mausoleum. Duly revived he was asked what his wishes might be. He requested he be shut in a room with all the issues of Pravda published since his death in 1924. After a week or so his food appeared to be untouched, so the room was broken into and a note found. It read: “Have gone back to Zurich. We must start again from the beginning.”

In a sense, with this work, Adams is going back to the beginning - the beginning for us Pakeha - of significant first contact, when the seeds were sewn for a new society, a unique combination of indigenous Maori and colonising European. As with communism, the project had its noble intentions and some memorable achievements, but on the whole it was a messy business involving much misunderstanding, compromise and exploitation. After two and a half centuries it’s easy to sympathise with the impulse of returning to Zurich.

Since the early 1990s Mark Adams has quietly, but assiduously and methodically traced the geographical sites of first contact, and, like his later series of country-wide treaty signings post 1840, they are often remote, uninhabited places, their very bleakness suggesting a pattern of dishonour and suppression. Perhaps the remotest and most unchanged place of all is Dusky Sound near the farthest south-western extremity of the South Island, the place there, Astronomers Point, the subject of Adams’ images of 1995, a place still unlocatable on Google Earth (1). There’s a certain irony in the site’s European name - a memorial to Pakeha belief in science and the values of measuring - signalling a focus on celestial bodies rather than the nature of the ground we walk on. Adams’ equally scientific instrument insistently shifts this focus from the ‘there’ to ‘here’ but not from ‘then’ to ‘now’ as both of these are conflated in his sober landscapes.

Perhaps inevitably, Adams’ formats of the diptych and the triptych pay homage to the historical art practices of a European ‘there’, as well as acknowledging the tradition of both the Picturesque and the Sublime by his angles and compositions. As Emil McAvoy points out in his excellent accompanying essay (2) this lends a “fractured coherence” to his project, at once avoiding the possessive panoramic view and admitting the limitations of a whole view when it comes to historical references. Adams’ work is well served by writers such as Thomas and McAvoy who deepen appreciation of what can be seen so easily as simple geographic views. They act as interpreters of what often is for Pakeha a foreign language.

The medium’s documentary tradition also remains a foreign language for many art curators, and practitioners with long, proven histories such as Adams’ seldom find their due within public exhibition culture, and it’s also rarer that the documentary mode in all its rich diversity is subject to examination there. There are few gallery professionals who wouldn’t jump at the chance to show Nan Goldin’s work, but in a recent exhibition catalogue (3) she mentions four “art photographers” who influenced her: they are Diana Arbus, Larry Clark, Weegee and August Sander. Hello?

Adams is well-versed in the work of his predecessors, especially that of the first professional European artist to visit this country, William Hodges, on the Resolution during Cook’s second voyage over 1772-1775. The Admiralty had wanted accuracy out of Hodges, and despite some later dressings-up - wholly to be expected given the artistic conventions of the time - the locations of his standpoints have been pretty much identified by Adams and re-depicted by his camera, not as acts of replication or homage but images on a continuum of engagement and understanding of what place might mean for us.

(1 ) It’s not even marked on the map on page 14 in the book Cook’s Sites, featuring Adams’ photographs and text by Nicholas Thomas, Otago University Press, 1999. The fugitive nature of the site is perhaps a symbol of unknowability and the impossibility of any fixed historical certainty.

(2) Reproduced on the Two Rooms website - Turning the telescope inside out - it is highly recommended reading.

(3) Camera in Love, photographs by Ed van der Elsken, to be published by Prestel in September, quoted in the New Yorker, 8 February 2017.