The Art Criticism of Robert Hughes 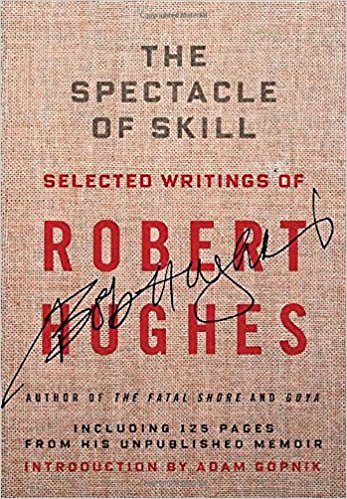 You could never accuse Hughes of being obscure. Even when he pulled out the ten-dollar words, it was always very natural within the prose and sent you scurrying with joy, rather than resentment, to the dictionary. And it's his robust prose and confident eye that is missing from a lot of today's art writing. You can't teach connoisseurship or even looking in a university art theory paper. Hughes was never one for theory.

The Spectacle of Skill: Selected Writings of Robert Hughes

Like most people who write for a living, I have a small and vivid cotillion of names dancing around each other that have influenced my style over the years. I have a fondness for Christopher Hitchens for his dramatically methodical dissections, even if his obsession with principle tended to blind him to the bigger ethical picture and lead him off down the wrong leg of history as in Iraq. I love Brian Sewell for his waspish no f*cks given, who, when it came to the inflated vapidity of a lot of contemporary art, was almost as often right as he was wrong. I envy Clive James’ effortless brilliance (and his 2007 Cultural Amnesia should be compulsory reading), even as I roll my eyes at his tendency to objectify women and failure to understand that humanist arguments don’t work on the science of climate change. Still, he leaves you feeling smarter for having read him.

I admire Pauline Kael’s revolutionising of popular criticism in general. I love Camille Paglia’s fiery brashness and frank openness, but loathe her politics, and feel intimidated by Susan Sontag’s intellect even as I find her aloofness and lack of self-awareness cool and alienating. If women critics are outnumbered by the men in my catalogue, that’s entirely my own fault and please feel free to list recommendations in the comments. I also have a habit of gathering inspiration from all sorts of places, from restaurant critics to drag queens, so anything is fair game.

Popular art writing is hard. You’re not really a journalist, nor an academic. You are required to be informed, yet engaging. The best are critics in the truest sense, rather than mere art writers who fawn breathlessly on a visiting big name or resort to basic descriptions of what they think they see. One must entertain, often be polemical, because it’s the only way to be heard beyond the choir stall. Meanwhile, the few places to be read in the mainstream media are being gnawed away as unprofitable, or more kindly, lumped in with entertainment.

Probably the principal influence on me, and, I suspect, many art writers of my generation, was and is Robert Hughes, and when faced with uninformed nonsense from the Guardian‘s Jonathan Jones, Jerry Saltz’s putzisch swagger, or opaque, theory-larded froth from writers who have forgotten their audience is the general public, what unites all the names laurelled on my personal Olympus is intelligence and clarity. As Ernest, Lord Rutherford used to say (dated by the quaint sexism), and I paraphrase, any idea that can’t be explained to a barmaid of average intelligence in the space of ten minutes, is not an idea worth having. The spirit, if not the example, remains a good rule of thumb in writing for a general audience.

Ah, the lot of the public intellectual.

These thoughts were occasioned by the posthumous publication of selected writings, The Spectacle of Skill in 2015. It’s a good overview of Hughes’ writing if, unlike me, you don’t have The Shock of the New and Nothing If Not Critical on your shelf. My chief disappointment in it is that it mainly samples post-Shock books (including the historically rubbish Rome) while completely failing to dip into his first two, incredibly hard to find books, The Art of Australia (1966), which I have devoured, enjoyed (The University of Canterbury has a battered paperback copy), taken with a pinch of salt, and wish there was a New Zealand equivalent, and Heaven and Hell in Western Art (1969), which in 20 years of searching I have never been able to track down even a library copy to interloan - a long standing despair of mine.

What can one say of Hughes? There is the Georgian grandeur that balances precariously on a lot of insecurity and hurt (Australia rejected him well before he rejected it back). In fairness, most of his insights in the mid-brow Time magazine days were cribbed and re-written from the exhibition catalogues in his inimitable New Journalism aphoristic style. It was his phenomenal memory that made all the difference, providing the rich sweep of narrative context that lifted the whole to something extraordinary.

He could be very right and very wrong simultaneously, as in his appraisal of Jean-Michel Basquiat who indeed did suffer from hype and mythology, but contra Hughes, was a great painter nonetheless. Likewise, Andy Warhol was indeed an opportunistic user and self-obsessed turd of a man, but Hughes can never quite transcend his loathing to give Warhol his due for comprehending media-mediated modernity (even as he heaps praise on Robert Rauschenberg for doing much the same thing with more engagement and handwork). And while Julian Schnabel was an awful arse in his youth, is that really enough to completely dismiss his good stuff?

Hughes’ preferred bailiwick was the Old Masters, but his writing on the shenanigans of his contemporary milieu is among his most vibrant. He was, however, definitely a historian by preference, far more comfortable with the dead who don’t talk back than the living who do. I often ponder the other path in the yellow wood that might have ended up in formal academia somewhere where your credentials and sweat have some sort of value.

You could never accuse Hughes of being obscure. Even when he pulled out the ten-dollar words, it was always very natural within the prose and sent you scurrying with joy, rather than resentment, to the dictionary. And it’s his robust prose and confident eye that is missing from a lot of today’s art writing. You can’t teach connoisseurship or even looking in a university art theory paper. Hughes was never one for theory.

Hughes visited New Zealand in the 1980s to give a lecture in Wellington. Hosted by Jim and Mary Barr, they offer a recollection here. That copy of The Shock of the New is now in the collection of Christchurch Art Gallery. I am envious. How wonderful to have a Hughes anecdote. I don’t remember Hughes ever saying anything about New Zealand art, beyond a passing reference to the cartoonist David Low’s place of birth; certainly the oracular all-knowing Google doesn’t dredge anything up, but he summed up for me, in my formative years, the agonies of being on the cultural periphery of Western civilisation, nose pressed against the window, in his seminal 1990 essay “The Decline of the City of Mahagonny“. It was his outsider-insider status that gave him much of his edge, but was also the source of his Achilles Heel when it came to dismissing as trivial what was merely self-referential (ironically the sort of thing he gives Kenneth Clark a bit of a caning for).

The first instalment of his memoir Things I didn’t know (2006) and material from the unfinished second volume, published for the first time in the final section of The Spectacle of Skill furnish most of the facts of his life. The latter is certainly some of Hughes’ rawest writing, particularly the passage on the suicide of his estranged son, Danton (you will tear up, I did). Indeed, this final section is the most important part of this newer volume. The art critics and curators of New York are given a thorough skewering - names are named and bodies disinterred regarding their rapacious graft and payola in the form of art for the private collections shored away against retirement. You may need a cup of tea and a sit down after reading.

Also returning to his ability to get things epically wrong, he says some truly horrible things about Helen Frankenthaler I find very hard to square (to be honest I find her slightly more interesting than the overshadowing Pollock), and other sclerotic geysers of spleen and glissades of taste. It’s quite obvious by this stage of his life he just didn’t give a f*ck.