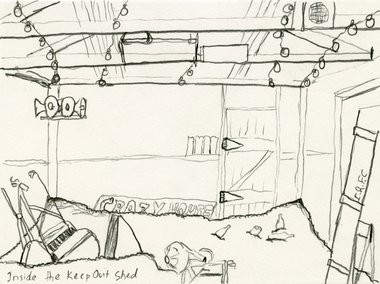 The resulting paintings were a form of faux folk art, with international influences like Philip Guston, Gorgio Morandi and Mark Tansey skilfully mixed with those of local painters like Yvonne Coleman. They were more ideational than nostalgic. For all their content about smoking, Stevenson himself is not a smoker, unlike say, smokers' champion David Hockney. The paintings these drawings anticipate were not autobiographical; more sociological.

Michael Stevenson
Inside the Keep Out Shed

While early next month Berlin-based—originally from Taranaki but now international conceptual artist—Michael Stevenson will present a brand new large scale installation in Auckland Art Gallery, this Michael Lett show looks back thirty years, presenting 24 preparatory sketches made for his paintings of the late-eighties. At that time he was living in Palmerston North, driving around and researching the church halls, landscape and symbolism of small-town New Zealand—locales like that of Inglewood where he was born and raised.

These pencil, ball-point, and solid tip ink drawings go nicely with the fascinating interview Stevenson did (click here) with Robert Leonard in Midwest Four (1994) discussing rural settlements, the culture of smoking, and the linked folk culture that he painted, like the cardboard dogs made of hundreds of woven cigarette packets.

The resulting paintings were a form of faux folk art, with international influences like Philip Guston, Gorgio Morandi and Mark Tansey skilfully mixed with those of local painters like Yvonne Coleman. They were more ideational than nostalgic. Stevenson himself is not a smoker, unlike say, smokers’ champion David Hockney. The paintings were not autobiographical; more sociological.

Apparent in these once thriving (now desolate) locations were lots of loaded symbols that Stevenson repeatedly focussed on: antler trophies draped with tinsel; stacks of hymnbooks or bibles, pies or plates; crumbling war memorials; wreaths made of paper poppies.

Stevenson’s drawings are small-sometimes on thin sheets folded into quarters bearing four (two inverted) images—and the lines, especially the pencil ones, are loose, quite coarse, and broken. With the paintings not being presented alongside these images, these sketches acquire a separate life. They are by-products from when Stevenson planned out compositions while pondering various spaces and objects encountered on his central North Island travels.

Some of these images, like the title work for example, seem to allude to conceptual artists like Robert Smithson. The titular drawing shows rubble inside a shed, not on top of it as Smithson did with Partially Buried Woodshed (1970). The internal space is being used as a sheltered (normally hidden) dump that Stevenson has furtively broken into.

Their size is a major factor if you think about the larger, much more precise, crisper paintings. If you happen to have a copy of Midwest Four or Distance Looks Our Way: Ten Artists from New Zealand (1992), you can compare the measurements. The comparison surprises. Two examples of drawing and painting sizes juxtaposed are: Jnr Red Cross (115 x 147 mm) 630 x 800 mm; KEV (148 x 116 mm) 800 x 630 mm. That is an approximately 1:6 ratio.

Some high profile artists turn their backs on their beginnings, embarrassed by what started them off, so it is terrific Stevenson is not one of those. Hopefully the paintings will be collected for an institutional show soon, but for the present, it is good that there is a spotlight on drawing, a research method that seems currently out of favour with university pedagogy. As with other artists such as Hammond and et al. you can see the rapidly growing sophistication of Stevenson’s graphic technique as he became more ambitious and gained in technical expertise and experience. I expect the coming show at AAG will be full of surprises.