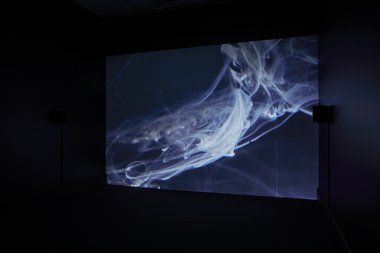 These two subject matters (both ‘indigeneity' and global catastrophe are very current) sit uneasily with each other unless perhaps you assume that the monsters in this case are not supernatural entities but projections of humankind itself; and its attendant stupidity. However if seen as ancestral guardians they take on a different significance, that of protectors of the planet's natural resources, and integrate well with the plastics contamination issue.

The Slipping Away
Curated by Lisa Beauchamp

This interesting show presents a split contemplative content, where the pollution of our oceans and rivers through plastic waste is placed alongside discussion about taniwha, the dragonlike (but protean) water monsters in Māori culture that can also be ancestral guardians. The Slipping Away  title could refer to the disappearance of life in the sea, or it could also (it might be argued) refer to the collapse of reason, or the corrosive impact of colonialism on indigenous cultures.

These two subject matters (both ‘indigeneity’ and global catastrophe are very current) sit uneasily with each other unless perhaps you assume that the monsters in this case are not supernatural entities but projections of humankind itself; and its attendant stupidity. However if seen as ancestral guardians they take on a different significance, that of protectors of the planet’s natural resources, and integrate well with the plastics contamination issue.

Occasionally—as in the case of the two brilliant (and beautifully installed) works that illustrate these two themes, Joyce Campbell’s film Flight Dream (2015), and the late Bill Culbert’s floor sculpture Pacific Flotsam (2007)—a third thread surfaces: that of radiating and reflected light. That more traditional theme can also be appreciated in Terry Urbahn’s churning and bubbly Bottles /Mosh video (2005) and SUPERFLEX‘s tranquil but stealthy Flooded McDonald’s (2009), and Jean Baudrillard’s photograph of a submerged car.

Flight Dream is 25 minutes long, Campbell‘s gorgeous images of light passing through ‘underwater’ skeins of ectoplasmic snot being accompanied by a stunning guitar soundtrack from Peter Kovolos. For ten minutes of it we hear a recited short story by Mark von Schlegell about a disastrous oceanic descent in a bathysphere, part of a search for a monster. Sometimes you see cascading showers of sparks, undulating white lines, hazy mists of brown smoke, or within the murk, flickering looped bands or sliced spheres that go drifting past.

Joyce Campbell’s other moving image contribution, Falls in Flood, is a film showing the Te Reinga Falls, situated at the start of the Wairoa River where the Ruakituri and Hangaroa Rivers meet. The Te Reinga Falls are the home of the ancestral taniwha of the Ngai Kohatu hapu, a female entity named Taniwha Hinekōrako who in times of flooding is meant to have saved hapu members from drowning by reversing the flow of the water.

A website devoted to taniwha stories has been created by the Mata Aho Collective. Pithy and evocative tales that merge past with present can be read here or on the touchscreen in the gallery.

In the biggest gallery space, Bill Culbert’s Pacific Flotsam mixes 78 angled tubular lines of bleary white light on a reflective parquet floor with 240 assorted label-less plastic containers. Qualities of light on (or through) surfaces are the main point of this work, for the recycled elements are all pristine and not corroded or decayed. The translucent white containers tend to be from milk ‘bottles’, the thicker opaque coloured ones from car oil varieties, the thinner opaque coloured sorts from cleaning creams, and the transparent plastic types from detergents and window cleaners. The piercing fluorescent light clings to their reflective tremulous edges (where transparent) and washes delicately down over their smooth sides (where opaque).

Raewyn Martin‘s Climate Change Heartbreak Poems (2006-2013) are attached to the wall in gradually disintegrating, crumpled cellulose sheets, the text there falling apart, or alternatively they are found in the form of a published handout, remaining intact on folded printed paper. The biodegradable cellulose-on-wall version formally is akin to the American poet (and Mark von Schlegell’s mother) Susan Howe’s torn and delicate (but stable) collage poems, but here constantly changing and unpredictable—like a morphing taniwha; like our sick, poisoned and now unstable planet.