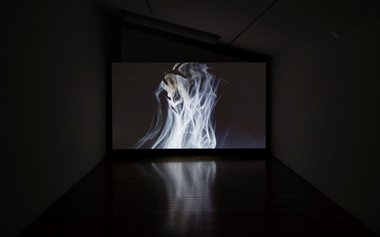 Add to this a superb soundtrack of ominous scraping electric guitar from LA noise musician Peter Kolovos, a rumbling yet delicate grinding as Campbell's linear forms emerge from the Gothic darkness into single ‘spot-lit' zones, sliding into focus (if slime dripping branches) only to then slide out to re-enter the oozy cloudy murk.

In this mesmerising 25 minute (but looped) film, Joyce Campbell extends themes from some of her earlier photographs and videos, playing with light, focus, liquidity and botanical form. The title comes from a short story (Flugtraum) written by Mark von Schlegell that was inspired by Campbell‘s Marianas series of photographs. Though the story is a narrative about a descending bathyscaphe, the film is more about ambience and motion, and veils of milky emulsion that dissolve into dribbles, to then sharpen to briefly become menacing thorny bushes - mouldy, leafless but submerged.

I’m the sort of dopey guy that enjoys watching heated coffee and recently added milk in a saucepan over a hot plate, drooling over how the streaks of dark brown coffee at the bottom slowly bubble up to emerge swirling in the milky confluence and eventually take dominance. I’m transfixed. Campbell‘s related video has similarities with Nicholas Mangan‘s wonderful film about clouds of dust from ancient rock, except without the extraordinary ‘galactic’ depth, multiplicity and fineness. Campbell celebrates fluidity and running edges of non-dissolving, churning milky liquid that spreads, forks off and then splits again.

Add to this a superb soundtrack of ominous scraping electric guitar from LA noise musician Peter Kolovos, a rumbling yet delicate grinding as Campbell’s linear forms emerge from the Gothic darkness into single ‘spot-lit’ zones, sliding into focus (if slime dripping branches) only to then slide out to re-enter the oozy cloudy murk. The music changes in volume and intensity like the illumination and chromatic whispers of Campbell‘s ‘formless’ forms.

In his story, von Schlegell talks of the narrator as a monster, a blobby linear creature akin to ganglia in moving liquid:

This Monster first approached me through a dream. I was the monster, or so it seemed. I was flying as one flies through the air in dream. I did not know I was under water…And then I saw myself… It has no arms, no legs. It extends a nervous system into pure volume. A sensory flowering, delimning the currents as they stream deep through the frigid hydrosphere.

Campbell‘s weed-covered spiky branches thus take on a science fiction presence as if they were living and sentient. Her working process - apparently involving electrically charged, incommensurately mixed chemicals, and dissolving ‘colloidal sheets’ - seems vaguely related to the films of Richard Frater, or the photographs of mysterious objects in tanks by Esther Leigh. The resulting arches of cascading ghostly dribbles and distended webs - mixed with materialising twigs and stringy thorny growths - and aural backdrop of industrial guitar squeals and rippling hums, hit a wide range of emotional resonances when in full throttle. This exhilaratingly suggestive film, rich in creepy multiple associations, is a cracker. It deserves a much wider audience.