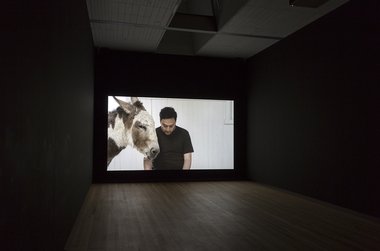 Te Ao here echoes the Romantic thesis. He brings the pathos of human emotion into an irrational act. He laments loss to the uncomprehending crowd. Unlike the Romantics though, he reminds us that the difference between nature and culture is that we think there is a difference. Nature is an invention of our own, as much as culture is.

Shannon Te Ao (with cinematography by Iain Frengley), Susan Te Kahurangi King
From the one I call my own

Poet? Heartworn lover? Holy fool? Betrayed wife? There is something of the intimate grotesque in Shannon Te Ao‘s works. His work makes me think of clowns, clowns as introduced by Angela Carter, clowns that carry the weight of the irrational violent world upon them, clowns of solemnity and meaning: philosopher clowns. His video in this show, two shoots that stretch far out, does something which clowns, and sometimes artists, have been doing for millenniums. It introduces the ridiculous and irrational, temporarily disrupting the smug order of the norm.

Throughout history there have been elements of the ridiculous, topsy turvy or irrational which have been injected into everyday life in order to shake it up, to remind us that our order is simply a façade - and that at any moment disorder could reign. Clowns, carnivals, Walpurgis night, folklore, the Romantics: Te Ao‘s work in this show harks back to these elements.

Let’s talk to the animals. No wait, let’s proclaim to them. Let’s speak to them of our thoughts of poetry, passion and betrayal. Despite this they remain quite calm.

Until the growth of rationalism in the West animals were considered to be capable of the same kind of understanding as human beings. And were held accountable for it, as E.P. Evans shows in his book, The Criminal Prosecution and Capital Punishment of Animals, in which he lists the many instances, prior to the Enlightenment, in which animals were prosecuted for everything from deadly murder to chattering in church. It seems we used to believe that animals were of the same order and understanding as us. But today we see animals through the lens of scientific categorisation and rational philosophy - and there are not many who think they appreciate poetry.

Te Ao‘s reciting to animals evokes a folkloric element. Once folktales were for adults, a way to make sense of the world, but also a way to disrupt it. Folktales taught that being tricky, smart and kind to old women or talking animals would get us ahead. They taught us that fools prosper. That being a bit of a weirdo would shake us out of our social constraints. Folktales are stories of aspiration and human folly. They introduce the possibility of playing the fool as the disruptor of the narrative. Te Ao’s work reintroduces us to the wisdom of the fool. He draws in disorder, disrupting our narrative.

In so doing, Te Ao makes a romantic gesture, not the hearts and flowers of modern romance, but a Romantic gesture. It echoes back to the Romantic Movement, to its disinclination to order, to its nostalgic embrace of the preindustrial, of the folk, of the past. The world we live in today, with its science, its rationality, its democracy, its identity politics, and its human rights, is a result of the ideas that the Romantic Movement rejected. The Age of Reason brought us the industrial revolution, scientific order, and rationalism. It brought us the rise of the middle classes and modern capitalism. It was a time when religion and sovereignty began to lose power, and science and democracy began to gain it, a period in which human rights began to emerge and notions of individuality began to take precedence, when a certain type of knowledge, Western scientific rationalism, became not only superior, but the only valued way of thinking. It was a time that initiated much of the way we think about the world and our place in it today.

Perhaps this resonance - with its embrace of poetics, emotion and irrationality - exists because we live with the results of the Enlightenment. Because for all the good it has done, it has also brought us to the brink of environmental and social disaster. Rationality and reason have let us down.

Te Ao here echoes the Romantic thesis. He brings the pathos of human emotion into an irrational act. He laments loss to the uncomprehending crowd. Unlike the Romantics though, he reminds us that the difference between nature and culture is that we think there is a difference. Nature is an invention of our own, as much as culture is.

By reciting poetry this artist may highlight the difference between the animals and us, but don’t be fooled. He’s well aware that these invasive species are no more natural than us. And we may not understand or feel any more than they do. He is reciting a domestic lament, love betrayed, his reinterpretation of a waiata, a public lament in which a betrayed wife grieves because her husband has taken a second wife in their old age though he promised never to do this when they were young. The wife wishes she could remove her emotion, and do the rational thing, leave, but she can’t because, against reason, she still loves him and her body still longs for him. Here the body and its emotion are woven together, nature and culture entwined.

Te Ao recites his own English version of the waiata. In fact ‘recites’ is too dry a word: he performs, emotes, he puts it onto his audience; the poem, his aching voice, body and animal audience holding central stage.

This is told in a very specific way, rooted to a particular culture, to a certain gender, in a carefully articulated manner.  Te Ao channels the voice of another gender, another age, another society, another culture. He revalues it. He takes it out of place and puts it in another place. He puts it in a gallery; he slots it in a place where it becomes meaningful according to contemporary frames of reference.

It is draws on emotion, but not emotion that is convincing. Like the animals I remain unmoved by the pathos of the lament and I am not sure I am intended to be. Perhaps it is not universal; it is certainly not natural.

I love this work because it is not reasonable. Because our reason has fucked us up. Because we think we know better. This work is simple but complex, irrational - but thoughtful.

There is a self-sufficient interiority about Susan Te Kahurangi King‘s work, a secret narrative that borrows from the world and distorts it inwards. Each work wraps a central figure deep within its pattern. Pattern is its guiding path.

This work draws on repetition. It does not appear planned, but it is immediate, working with what is here and now, building upon what already exists, taking a single point or element, a motif, an article of paper doll clothing, and extending it. The pattern surrounds and encases the beginning. The beginning is buried deep within the pattern. Is the pattern the point, or the distraction?

Sometimes drawings are about an external object or objects. They are simplifications or reflections of the outside world. The drawing in this exhibition is not that type. It is interiorised, drawing upon itself, its own internal centre. Each mark is related to the marks already there. Each mark builds on what has gone before. The essence of mark making, the work grows organically into pattern. Pattern flows into pattern.

But there are figures at the centre of much of this work, humanoid figures that grow out of hats or curl into pattern, faceless and oblique. The introduction of such figures introduces narrative. We associate people with a story. When I look at photographs or drawings of people I wonder about their circumstances and their relationships to each other. I make judgements based on their clothes, expressions, looks and the contexts I find them in. But here I cannot.

The figures tell me a few things. Even though they are distorted, faceless and buried in pattern, I can guess what that might mean. But I can’t confirm that my guesses are true, so I have to be content with my own hypothesis. My vocabulary makes it difficult to access the narrative I am looking for. It seems to turn me back, tie me in and pattern me over.

Like Te Ao’s work then, this disrupts my world view. It will not allow me to use my normative knowledge and understanding. Together these artists speak to a disruption of certain ways of thinking. Ways of thinking that run deep within our cultural norms. They deflect our minds out of their accustomed paths and remind us of our own unnaturalness, making us reflect on that question, that unfashionably fashionable question: what is it to be human? 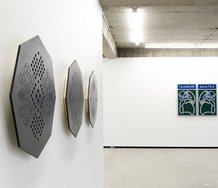 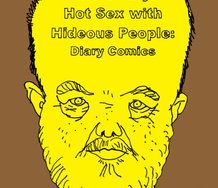 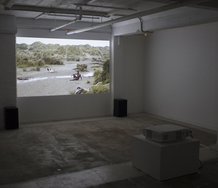