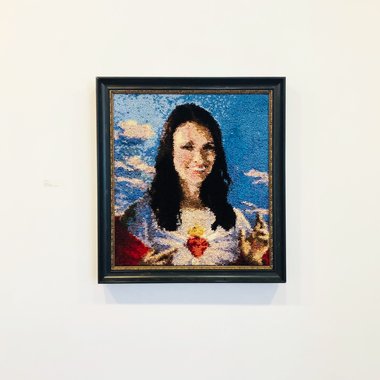 Political polemic won on the day. It often does here in these pragmatic islands. However a voice needs to speak also for the underdog, for artists ploughing a lonely furrow, dealing with matters more fundamental and existential. There were a couple in the show. One was rejected, the others unplaced. No surprises here.

When it comes to art awards, I have always been an advocate of the Salon des Refusés. I want to see the also-rans. More specifically, I want to see how many of the rejects should have been included in the main event; how many Manets, for instance, got pushed to the wall.

To their credit, the Wallace Art Awards of 2018, provide such an opportunity and from the small cross section offered in the catalogue, 16 in number, I would say at least 4 were hard-done-by.

There are 8 judges—a tad over the top—and one wonders how much horse trading went on in the selection process.

Top of the hard-done-by list would be Allan Ibell’s Snake Bite Hallucination (or Portrait of Eurydice At the Threshold of Living). The title alone should have seen it given automatic entry. Ibell’s signature pieces have all the enigmatic qualities of Greek drama, made modern, consisting of parred back stage sets dense with existential tension and quandary. But it didn’t make the cut.

It’s interesting to speculate why such a work got passed over. One theory that might go halfway to explain it, is that New Zealand critics, commentators and art curators seem preoccupied with social and political commentary. It’s an easy and undemanding theme song that gets played over and over in these islands. Works that deal with more profound issues are, by contrast, overlooked, and hence thin on the ground.

And true to form here in the Wallace, one of the most arresting works in the show (though not placed, perhaps because it was just too laugh out loud and blatantly political), was Mark Rayner’s Jacinda, a wool embroidered rendition of the Prime Minister, depicted in the guise of a bleeding heart Jesus. Sainthood might have been bestowed on our PM by some, but Rayner does an amusing satirical job here with our smiling saviour, complete with exposed bloodshot heart. “Come unto me all ye that labour and are heavy laden” can almost be heard as she points to the beating and emblazoned sacred organ.

Wool also is the medium used by Fulbright Award Winner, Emma Fitts. Her Unknown Cloak is a work with more implied political overtones, though the bleeding is still literally visible. This hand dyed woollen underlay piece with its triangulated patterns, alludes directly to what has become a political fixation in New Zealand. The four red threads that hang down off it, like drips of blood, make no bones about what social and political commentary is being made here.

Peata Larkin’s They Don’t Speak My Language (Kaipara Award Winner) continues the political accent. Large yellow blobs of acrylic paint placed in patterned rows along an embroidered silk ground, give off the appearance of a musical score. Complaint about social alienation and outsider identity are sounded in these teardrop paint formations.

The Jury Winner plays out a similar scenario only a little more manifestly. Paul McLachlan’s Blue Lion invokes the work of George Stubbs and his Horse Attacked by a Lion (1769). McLachlan’s version depicts an image of a Maori being mauled by the king of the beasts (code for British imperialism), against an idyllic sylvan setting. Interestingly, this wall hanging is a textile work, made of merino, mohair and polyester yarns.

The Paramount Award Winner, true to form, engages with yet another political issue, this time in the adroit key of reworked modernism. Imogen Taylor’s autumn coloured Refusal to Yield, riffing on Cubism, Orphism and Rita Angus, does a playful little number on queer theory, employing geometrics to proclaim the cause. The oft-used political refrain “We shall not be moved” is adeptly presented in ovals, triangles and parallelograms that celebrate the female form in abstract mode.

Abstraction is the other big player in this collection. Of the 50 candidates selected, over 30 of them present an abstract face. Alice Alva is a prime example and she continues the textile refrain already alluded to. Using wool, cotton, metallic thread, builders’ line and plastic embroidery mesh, she creates a multi-coloured conglomeration of small geometric shapes crowded together in what could be taken for a sometime aerial view of an urban landscape. Entitled Much More Beyond the Door, it points to the need to broaden the scope of materiality in the creation of art and to incorporate traditional craft skills into high art practice. The digital look of the work creates a nice tension between old embroidery conventions and new technology.

Another unique abstract piece is the work of Lisa Benson. Her Colluded incorporates small layered squares of photographic paper, positioned at oblique tangents to one another, creating not only geometric forms, but also, with exposure to light, shifts in tonal qualities. This is literally a work in progress. Browns and creams evolve before our eyes.

Sonder 14 by Matthew Browne, with its hard-edged abstract configurations, is a visual delight, simple yet complex, enigmatic yet nevertheless readable when one considers the title. The two ‘balanced’ but not quite biomorphic forms, abutted together, exemplify the title of the piece that describes the feeling following on from realizing that everyone one meets has their own secret and complex life, complete with happiness and heartache. The use of cool abstraction to delineate such an emotive experience is an astute move.

Shannon Novak in similar fashion has chosen abstraction to explore a gay identity polemic, delivering his discourse on the topic of patients struggling with HIV infection. His Nine Months on PrEP incorporates the very substances, mixed with acrylic paint, that are part of the medication taken to preventthe damaging effects of HIV. The repetitive circular format of his boards mimic a tablet shape, while the play of geometrics inscribed into the painted wood perhaps allude to the chemical complexities at work that war against disease. Literal and symbolic weave an interestingly little combative dance here.

Several photographs made the grade and my pick, hands down, is Geoffrey Heath’s Contemplating (im)mortality, taken while ironing a shirt. The conjunction of the banal with the weighty reflective subject matter is utterly compelling. This is art at its best, understated while addressing the big questions. Stripped to the waist, his back turned to us, the protagonist stands before an ironing board, contemplating a small photograph of Michelangelo’s Pieta, hanging on the wall. We, the viewer, note a scar on the young man’s lower back. Perhaps a wound made from an operation to cut out some carcinogenic disease. Then, in this most commonplace of settings, a hotel bedroom perhaps, we observe on top of a small set of drawers next to the bed, a golden coloured crown. So much one could read into this curious, humble item. A costume piece to go with an anticipated night of debauchery? A reference to queen and its gender implications? Or equally, given the context, an allusion to that evangelical trope of having stars in one’s crown as a reward in the afterlife for faithful devotion to God? It is ripe with emblematic connotations.

With respect to the others, here is the real winner. Gravitas is located inside the most ordinary of settings, and—with the simplest and subtlest of means—the subject of the human condition is charged with a pathos that speaks directly to modern sensibilities.

Of the others, special mention needs to be made of Filani Macassery’s Lunar Portrait #Star Dust for its updating of the tapa cloth medium (or the look of it) with engaging abstract notations, Alex Miln’s highly politicized Second Amendment with faux rusted signage and topical reference to religious terrorism, and Kara Burrowes’ Urban Ebony for doing a colourful improvisation on Rosalie Gascoigne.

Political polemic won on the day. It often does here in these pragmatic islands. However a voice needs to speak also for the underdog, for artists ploughing a lonely furrow, dealing with matters more fundamental and existential. There were a couple in the show. One was rejected, the others unplaced. No surprises here.

(The works by Alan Ibell, Shannon Novak, Alex Miln and Kara Burrowes that I have mentioned are not actually in the exhibition in Morrinsville, but are able to be viewed in the catalogue.)

The editor has posted the following comments from Mr. Dornauf: I wasn’t privy to the “provided information” on this work, ...

The editor has posted the following comments from Mr. Dornauf: First let me say that it wouldn’t have mattered who ...

Hi Peter, I would like it noted that Blue Lion as a political work, depicting a Maori and using a ...

Thanks for the review.
I'm intrigued that you consider Geoffrey Heath to be the "underdog" when for the first time the 2018 awards were dominated by female artists (6 out of 8), 2 queer artists, and 2 indigenous artists.
As you'll see in an article like this.... https://thespinoff.co.nz/art/30-09-2019/gender-bias-and-art-in-aotearoa-a-spinoff-survey-reveals-the-harsh-reality/ ..... female artists in Aotearoa are still completely under represented in institutions and collections. Indigenous and LGBTQIA+ artists even more so.

.....So technically is Heath even an underdog? Has the kiwi male become marginalised by all us shouty queers?!? Heaven forbid.

.....I'm also interested to hear your understanding of queer theory, if you think it is exempt from "matters more fundamental and existential"?

The editor has posted the following comments from Mr. Dornauf:

First let me say that it wouldn’t have mattered who had been promoted as Paramount Winner from the other 7 award recipients, my remarks would have been the same.

And it wouldn’t have made any difference if the artist I spoke of as the “underdog” had been male, female bi, black, white or gay. I don’t have those agendas or think in those terms. I look at the nature of the work. The artist’s colour, gender or sexual orientation is completely irrelevant.

I do think there are more fundamental matters that reach beyond socio/political issues. The gay man in Heath’s work is staring at one of them. That doesn’t preclude the importance of gender questions, but I personally don’t think it’s up there with the question of one’s mortality. And that was the general point I was making about how things work in this country in relation to contemporary art in New Zealand and one of the hierarchies that pertain.

Having said that, I personally really liked your work and it deserved the recognition it got.

Hi Peter,
I would like it noted that Blue Lion as a political work, depicting a Maori and using a code for British imperialism, is your interpretation of the work and is not based on any provided information.
Thanks

The editor has posted the following comments from Mr. Dornauf:

I wasn’t privy to the “provided information” on this work, but even then sometimes what is claimed for a piece doesn’t quite match or live up to the product. Who knows – perhaps this a case where Milton (Paradise Lost) was of the Devil’s party without knowing it.

It raises the old conundrum about who is best to interpret a work – the artist or critic? An artist's intention doesn’t always come off. On the other hand, a critic can read into what’s not there. Then, of course, there is the situation of multiple readings given that the artist does not have complete interpretative ownership of their work.