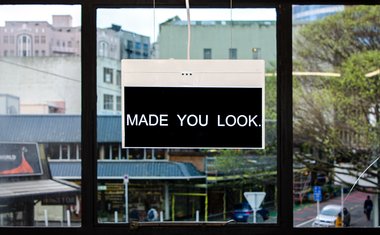 When Pointon completed her ‘flyover trilogy' earlier this year, post-Covid, I found it underwhelming. The gimmick of the work's reality undermined what I found so witty about it in the first place. Watching grainy, near indecipherable footage of the banner replayed over instagram stories, I became even less convinced by its novelty. Proving that sometimes the concept itself is stronger than the concept brought to life.

WHERE TO FROM HERE asks a BIG question, something typical of Wellington-based artist Elisabeth Pointon, known for her huge aerial banner works which come at the intersection of advertising and contemporary art. The title asks where will her career go, or her personal life—not to mention the pandemic. There’s also a notable absence of a question mark, so perhaps it’s not even a question. The answer to that whole line of examination is pretty apparent already; just more relative degrees of precarity for everybody.

After exhibiting at institution after institution, Pointon finally has her solo dealer debut at Jhana Millers. She has gained considerable success for such an early career artist, yet the question of “where to?” doesn’t engender stability; nobody is staying put, even if they wanted to. “Where?” requires movement, flexibility—like the crown jewel of her exhibition, the huge, inflatable sculpture of the words “BIG TIME.” Surrounding BIG TIME. is a series of exit signs, hung throughout the gallery space. The signs have been co-opted by the language of advertising—their initial functionality rendered moot—this being the base of Pointon’s coy artistic practice. Instead of purposeful directions, they display meaningless advertorial phrases: “BIG DEAL.,” “PHENOMENAL.” and “TAKE CARE.” among others.

I remember spotting Pointon the day before we went into lockdown. On that day—many, many moons ago now—I ran to Bunnings to commandeer a series of low-grade biochemical weapons, in order to fight off the neverending parade of rats in my flat. Pointon was in the line ahead of me, looking like a typical Wellingtonian; me, a Newtown crackhead in comparison. For some reason lots of people were buying plants that day. I noticed several people on the bus home were cradling pot plants in their arms—but I daren’t even suggest Pointon would be caught dead buying a rotting plant from Bunnings. That wouldn’t be very Jhana Millers of her. Yet maybe the answer to the exhibition’s title is to go to Bunnings to buy a plant. All your problems solved.

Pointon is a conspicuous figure in the Wellington art scene, having completed her MFA at Massey while being tangentially involved with ARI play_station. Her work seems to be just about everywhere; often all at once. During the New Zealand Festival of the Arts I saw her video work, A guide to effective implementation of self-service, projected onto Te Papa. That truly felt like a “BIG DEAL.” I was also similarly enthused by seeing her ‘work’ in last year’s The Future of Work at The Dowse.

Pointon’s art feels more substantial when divorced from oblique lines of text. There is less conceptual bite to selling the language of advertising in art, than when advertisers sell art. The lack of mystery inherent in the statement of intent with words like “SPECTACULAR” makes me wish the work wasn’t so straightforward. The re-commodification of the phrase dries up all meaning, in the way her institutional efforts did not. As such, I would’ve loved to have seen just about anything else alongside the works in Millers, to break up the show and give it a bit more heft. I miss the presence of her inflatable tube man motif.

In conversation over a recent show at Mossman, someone said to me, “I don’t judge artists based on their dealer shows.” I also tend to follow this line of thinking. Often, it feels criminal to watch conceptual artists (term applied loosely) twist themselves around the limitations of the dealer framework. Even by that logic I still feel WHERE TO FROM HERE is more successful than not. It is perhaps unfairly compared to the outsized aspirations of her last project. It just seems to me that Pointon made some conservative last minute installation choices here.

Naturally, I admire the ambition in her much publicised “lotto” artwork. Yet I found the stronger version of the work to be at play_station—where a single banner took up the entirety of the gallery space. I felt the hang in City Gallery was overwrought and crowded. The monitor showing footage of a banner being flown felt like another last minute gesture. The most salient formation of her aerial banner work clearly has been at Hobiennale where use was made of the Avalon theatre’s architecture in Simon Denny-esque fashion for the install of Pointon’s OUTSTANDING. banner and corresponding inflatables.

However, when Pointon completed her ‘flyover trilogy’ earlier this year, post-Covid (or in this ‘neo-Covid environment’ as I am rather fond of saying), I found it underwhelming. The gimmick of the work’s reality undermined what I found so witty about it in the first place. Watching grainy, near indecipherable footage of the banner replayed over instagram stories, I became even less convinced by its novelty. Proving that sometimes the concept itself is stronger than the concept brought to life. (Bear with me here, I’m getting a call. It’s from Marina Abramović, just ringing to say, in her classic thick eastern European drawl: “I told you so.”) Yet, Pointon’s concepts are now being quite literally brought. So who’s the real fool here? But on that—to be honest—I think Millers is underselling Pointon. $1500 per sign? If I had the cash I’d pay double that, at the very least; if I was a betting man, I’d lodge a hefty sum expecting that those works will only go up in value. But then again, as the saying goes “What goes up.,” … .

There’s an essay that goes along with WHERE TO FROM HERE, I subjects and we objects by Francis McWhannell; I’m suspicious of the narrative that it presents. More so, even, of the phrasing used throughout. What does “assertively 3D” even mean? “It’s Michelin Man writing, only not white.” I’m so bored by the art world engaging in this bizarre liberal race taxonomy, it’s all rather hypocritical and condescending when the shadow of the Fletcher Trust looms over McWhannell. Moreover, his writing doesn’t really do Pointon any justice when it contains sentences such as “Pointon is a woman.” Full stop. Complete sentence. Opinion: Okay, and? BIG DEAL. Do better.

I also don’t really care about whether or not Pointon acknowledges her fabricators. McWhannell mentions this artist-fabricator dynamic Pointon supposedly has in passing, as if it is an example of Pointon engaging in community building, ‘paying it forward.’ If this is to become the standard, then it’s rather ineffectual to the point of contemporary art, no? Must a photographer always pay homage to their framer? Regardless, I don’t see their names mentioned in Millers’ paraphernalia.

McWhannell seems to fixate on just how much preparation Pointon puts into her meetings. Noting that it felt like a “private performance.” I’ve written about the performative aspects of Pointon’s output as part of the Glad We Did That project before. It’s funny. Pointon’s persona adds much good will to my interpretation of this exhibition. It’s impossible to be too critical of her art when she seems just so very affable. That is reflected in the charm of her work, though sometimes it can be a bit overdone.

Perhaps what WHERE TO FROM HERE is missing, is just that. Another layer of performativity would make the whole thing click perfectly into place. However, McWhannell’s laser focus on Pointon’s measures to protect herself against the more nefarious aspects of ‘the institution’ ends up feeling more patronising than empowering. It puts her on the back foot. It’s not a stellar essay to contextualise the artist’s first solo dealer exhibition—although it does well to place her other recent presentations. Many of the critiques I’ve made can easily be chalked up to the interference and ignorance of curators—not to mention writers—that Pointon‘s work is separate from and well above.

All that said, I find the duality of the vinyl on the exit sign series to be conceptually intriguing, the colour of which the buyer can customise: the choices being black, red or gold. However, all the signs presented in the gallery are only black and gold reflections. Although, I did see a version of the illuminated sign series with the text “ICONIC.” in black and red at play_station’s niche flat survey show CLUB 290 earlier this year. The gold side of the sign MADE YOU LOOK. looks outward through the gallery’s windows to the street, matching the beige tones of the building’s exterior. The installation playfully twists the functional utility of an exit sign. I mean, the very title of the show is, in itself, an exit sign. And so, it doesn’t ask but rather states, with intention because it already knows—where to from here. 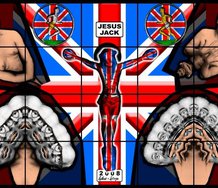 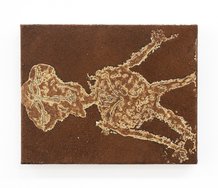 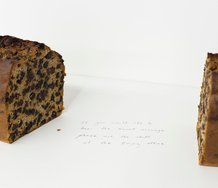 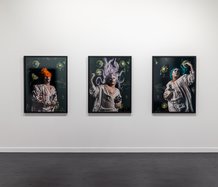