Foot on the Brake 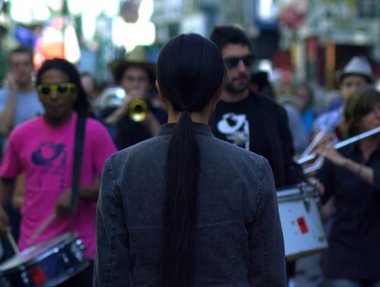 DE-celerate examines the need to press the pause button, to slow down, reject the notion of progress and capitalism's enthusiasm for waste and mindless profit-making consumerism. These destructive tendencies have been underv attack for many decades, but lately they have been brought into sharper focus by the lethal impact of the pandemic and its exacerbation of unemployment.

Gabriela Salgado’s last show organised for Te Tuhi before she returned to London, DE-celerate examines the need to press the pause button, to slow down, reject the notion of progress and capitalism’s enthusiasm for waste and mindless profit-making consumerism. These destructive tendencies have been under attack for many decades, but lately they have been brought into sharper focus by the lethal impact of the pandemic and its exacerbation of unemployment.

Largely through the works of indigenous poets, sculptors and film-makers this wonderful exhibition looks at time cycles, focussed contemplation within concentrated moments, and inventive reusing of global and localised resources. Complex and varied, it celebrates many (hitherto marginal) voices advocating a pulling back from commercial fixations, embracing respect for nature, weather and their essential roles in our collective well-being.

Kimsooja is a South Korean artist based in New York. Her A Needle Woman (a projected video in what was the Te Tuhi library) shows the artist from behind, standing motionless in the middle of a very crowded street, deliberately obstructing the wide stream of pedestrian traffic so they have to swerve around her. (It has coincidental similarities with Jeremy Leatinu’u, Public Observations 11, 2010, where he is sitting like a Buddha in a busy crowded South Auckland mall.)

Straight as a rod (a human obelisk), Kimsooja makes us examine the oncoming tide of approaching walkers, their faces peering—mostly uncomprehending—at the filming camera.

Fiona Clark’s sprawling pioneering The Waitara Project (ongoing in various iterations from the 1980s) is a process-oriented community work where secondhand objects and garments are bartered through a process of negotiation—to ensure appreciative new owners and avoid waste. (As a point of comparison: less like an op-shop store, Eve Armstrong’s related Trading Table performances, well known from over a decade ago, are less overtly community oriented in their scale, and more about the intricacies of finding agreement for a swap. Both are not obviously ‘art’ in their appearance—more the setting up of exchange systems.)

John Pule’s lovely little free handwritten booklet (Sadness Spirit, 2013) has 16 short poems that could be arranged in any sequence. Here is one example of his haikulike texts:

Its minimal phrasing is stunning; so intensely vivid and full of surprises.

Chilean artist Francisco Huichaqueo (from the Mapuche Nation) presents three remarkable elemental films, using a wide range of techniques from subtle overlaying and grey and blurry antiquing, to hot saturated colour that leaps out at you. They are like highly nuanced home movies, dealing with place, the cycles of nature such as weather and plant growth, and family history.

One (Kulkul Child, 2020) is a flickering b/w loop projected into the inside of Wahi (2020), a beautiful pale ceramic pot by Stevei Houkāmau. The other two are much longer and more physically immersive for the viewer.

IIwen, the earth sells of father (2013) is about maintaining a vegetable garden, the digging of the earth, planting of seeds, the yearly cycles, the impact of inclement weather, the pleasure of gorgeous flowers, farmyard animals, home and father-son relationships.

Spirit Women (2020) is a stunning look at five women shaman-poets working in Chile, Mexico and Bolivia, who speak in their ancestral tongues, are gifted performers, and who sometimes wear amazingly colourful costumes. Often set with water imagery, reflected in gently meandering rivers or waves hitting beaches, these super-articulate women (through their dreamlike imagery) hit out at desecration of natural resources, the suffocating imposition of colonial languages, and the woeful inaction of political leaders in the face of the virus.

Nicolas Molé and Mariana Molteri’s ‘voting booth’ of transparent flower-motiffed muslin (Insulatus, 2020)—with its table of four-sided videos with trapped inhabitants, and another four on the walls, all of Covid-masked jostling /dancing men (Richard Digoué and Simane Wenethem) and plants—seems to shout that ecological and Covid planetary solutions rely on responsible democratic consensus.

Another related work, Étienne de France’s The Green Vessel, 2020, features video and transparency of a wall-less house on a grassy island (built on a hidden constructed raft) floating on a mist-shrouded river. A symbol perhaps of the planet itself, its vulnerability and need for stability

Sandra Monterroso’s performance video (Breath of the Spirit, 2016) shows the artist moving around a classroom, breathing into and out of a large paper bag on which is written: ‘Racism is a colonial wound that can be healed’. The bag contracts and swells as she huffs, puffs, wheezes and blows while breathing through it. The aim seems to be to create a kind of filter, attempting to purify the noxious aether in the room.

Humans Go Home, 2020, Francisco Vidal’s gridded wall of 66 black-lined drawings—made during lockdown in Lisbon—reveals an artist with an elegant style akin to that found in many graphic novels. Multiple textual ‘erasures’ though—and overlapping forms— make it very different. He mingles portraits of artists he admires with social protest, images of indignation and deconstructed ambivalence. Copies of these drawings are available for free from the gallery office, undermining conventional art-commercial mores and encouraging the contemplative ethos of this show.