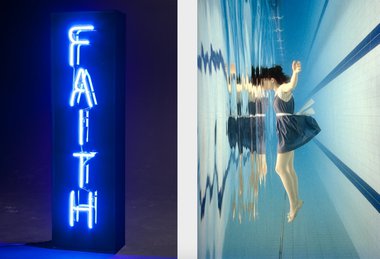 What is interesting about these projects of Asdollah-Zadeh is just how tightly interconnected many of them are. Let's start with the 2021 photographic diptych he has made with Anna Starr (a design strategist). It is called 'Faith and Through the Looking Glass.' On the left is a neon ‘obelisk' saying ‘FAITH' and on the right a young woman floating underwater in a pool (tilted on its side) looking through the liquid as if peering through a prism.

In this mini-survey of works by the Iranian New Zealand artist, Shahriar Asdollah-Zadeh—that covers the years 2013-2021—we see a selection of videos, photographs, acrylic paintings on paper and photographed neon sculpture. It is his first show with Trish Clark.

The two videos here are well known. Fear Performance: The Myth of Sisyphus (2013) shows the artist repeatedly dragging a heavy sculpture of the word ‘Fear” up a very steep sand-dune, hinting at the strain of summoning self-control to allay one’s nerves in reoccurring stressful situations. On the other hand, The Metamorphosis of Memory (2013), presents a glittering reflective skull on a nightclub dancefloor that references Middle Eastern fast foods (kebabs) to an intricate soundtrack of the classical Persian zither, the santur. The skull reminds us of the history of incessant military conflict that is the backdrop to the ‘highbrow’ culture.

What is interesting about these projects of Asdollah-Zadeh’s is just how tightly interconnected many of them are. For example, let’s look at the 2021 photographic diptych he has made with Anna Starr (a design strategist). It is called Faith and Through the Looking Glass.

On the left is a neon ‘obelisk’ saying ‘FAITH’ and on the right a young woman floating underwater in a pool (the image is tilted on its side) looking through the liquid as if peering into a mirror or through a prism. With Asdollah-Zadeh ‘faith’ seems to denote optimism and a belief in humanity and all its varied cultures that have to co-exist on this planet. He has exhibited this neon sculpture in Auckland’s CBD shop windows.

FAITH is also an anagram of the name FATIH, a district in the Turkish city of Istanbul, in which the Topkapi Palace is found. During the Ottoman Empire this palace was home to many treasures, including an Iranian scroll from the end of the fifteenth century that was later discovered in 1986. Made of parchment and depicting a complex tile pattern, the decorative angular motifs repeatedly revolve around a thirteen point star polygon.

Asdollah-Zadeh’s fascination with the diagrammatic schemata of this manuscript is shown in his Pale Blue Dot series which references the planet Earth as it looks from outer space, for he superimposes its bluish colours over various configurations of straight-lined shapes found in the scroll. The geometric forms (called girih) look like paving stones or perhaps Josef Albers’ anti-perspective drawings, with linear perimeters (as ‘national borders’) and empty (but subtly brusherly) shapes dominating.

The gallery handout also includes—along with the list of works and bio—an illuminating conversation between the artist and George, an exNASA aerospace engineer, discussing global issues such as migration vectors, and things like the unified non-political view from the constantly orbiting International Space Station.

The other works (The Spectrum series) are a collaboration with Sarosh Mulla (an architect and designer) and Patrick Loo (an architect) where rooftop ‘prism optical modules’ have been created through refraction to transmute sunlight into colourful spectral compositions-with hot saturated grainy hues, that can be photographed directly.

With these, what is normally experienced through handheld prisms on a small scale is suddenly enlarged to become much more physical: a richer bodily encounter using wider glowing swathes of chroma on Ilford paper. The texture looks like paint but the pigmented intensity creates pure pleasure; a domain quite different from mediating symbols like shiny skulls, sculptured letter fonts, steep sandhills, but perhaps closer to the sounds of plucked metal strings in terms of physicality. All are cultural, but spreading out along a mind-body continuum with some more immediate than others. 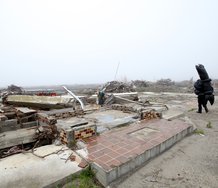