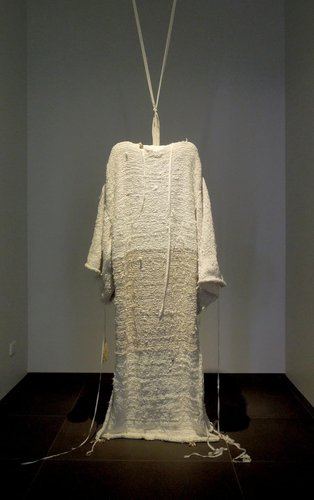 No giving up in evidence here, though, he thought, the artist did not give up, she made good her escape, the bed became a cocoon knitted around its inmate, or she entered it after the knitting, more likely, a garment, an ungainly outfit but a portable one, a portable visual shield, a colourlessness, a means of passing undetected through blanknesses, barriers, edges, defining histories or defining stories, whatever, in any case a means of escape. There is no knowing through which liminal zones this escape was made, he thought, if he was right and an escape was made, but here, caught in the fabric, a plume of seagrass or some such vegetation, vegetation perhaps pushed through in traversing the zone, snagging itself on the fabric as such vegetation snags, he knew about that, evidence, both time's trace and the trace of a location.