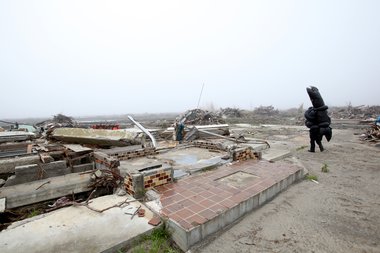 Possibly the most spectacular work is the performance practice of Zon Sakai, photographed here by Kimiyuki Arikawa whose coloured photos show Sakai wearing a large black double-pillow—cum ‘snail’ or ‘slug’—sculpture on his back made of inflated tyre inner tubes. In some of the 'Radioactive Heavy Duty' series, Sakai is nonchalantly walking around the ruins of the Sennai Nuclear Power Plant, in Kagoshima Prefecture, several months after the 2011 earthquake, commenting on governmental tardiness in closing down nuclear power plants.

This nine artist show, organised by the Original Artist Association and held in a space located in an apartment block in Grey Lynn, focusses (according to its curator) on ‘conceptual photography’. Conceptual art, of course, by nature is not medium specific, although photography is particularly useful for documentation of transient events, and so a popular tool. The title ‘Empty Colour‘ seems to attack sensuality, dismissing most ocular pleasures, but not the retinal impact of black and white.

To elaborate a little on conceptual art, it might be argued that the term is now meaningless, as it can be applied to all art by definition. If you happen to see art as distinct from craft (ie. you insist on a difference by dualistically separating mind from body) you may unabashedly prioritise pre-‘action’ thought over hand skills—as if the two can be processually and sequentially pried apart. However, if you make no such distinction, seeing art and craft as one, and photography included as an artform, then ‘conceptual photography’ is probably a misnomer. Thinking skills are then—in a sense—muscular and, in a continuum, related to manual skills.

In the sixties when conceptual art emerged, many types of avant-garde art were initially placed under that art historical umbrella, from performance art to mail art, private philosophical ‘art’ conversations and artist books. Today those once blurred or ignored distinctions are emphasised. The definition has now sharpened up because any method, including painting that has no text, can be a vehicle for an idea. And photography itself of course has changed hugely. And here in Grey Lynn, naturally enough, it is put to many uses.

In this show of mostly New Zealand-based artists (many with ties to Korea, Japan, China and the UK) Jae Hoon Lee is the most well known locally. His image is a digitally composite cloud form made of hundreds of vertical scans of separate online clouds, the multiple slivers butted together so they optically shimmer as if alive.

Possibly the most spectacular work is the performance practice of Zon Sakai, photographed here by Kimiyuki Arikawa whose coloured photos show Sakai wearing a large black double-pillow-cum ‘snail’ or ‘slug’—sculpture on his back made of inflated tyre inner tubes. In some of the Radioactive Heavy Duty series, Sakai is nonchalantly walking around the ruins of the Sennai Nuclear Power Plant, in Kagoshima Prefecture, several months after the 2011 earthquake and tsunami, commenting on governmental tardiness in closing down nuclear power plants. This artist spent ten days in Auckland in 2018, and worked collaboratively with local artist, Chris Berthelsen.

Frankie Chu‘s contribution mostly shows a collection of different-sized images depicting curved entangled branchlike lines made in transparent paint on a wall and photographed so they hover in space, floating above the floor. One fuzzy image seems made of knotted and looped wire clusters that have been photographed moving in the air so that they blur. (Or else the camera has been moved.) The images are drawings, paintings, sculptures, photographs and performance residue all packed into one.

One distinctive installation by Ryan Sun features a large, three-part (two-scaled) b/w photograph of Sentinel Rd beach, combined with a horizontal piece of burnt driftwood positioned in front of it—on the supporting wall. Below the deliberately streaky and blotchy antiqued print is a long, handmade woollen scarf: two years’ weaving work. Out on the floor is a freestanding stack of two tar-covered kauri blocks on which are carefully placed a lump of beeswax, a small ball of string, a tiny multi-coloured stone and a snapped-off plant bud; and stapled to the side, a conical tightly bandaged dry flower. Also on the floor nearby is a moth-eaten flap of disintegrating grass turf. Enigmatic, these multiple elements look like traces of some shamanistic ‘healing’ ritual. A reference to Beuys perhaps?

Sophy Qi usually likes to photograph from the top floor of high-rise apartment blocks, but of her three works here, only the one indoor image of digital photographic gear and a fan lying on a green felt-covered table has that aerial ambience. A second image shows a dolphin in a murky aquarium; another a tattered butterfly on a dangerously prickly cactus. The three works collectively hint at urban claustrophobia.

Yvonne Shaw extends that mood of unease via an image looking out of a high window in what was once a hospital, but which become a photography common room in a tertiary institution. It has a suburban landscape vista, and through the distant horizon suggests a pressing need for bodily escape.

Qing Yang on the other hand, looks the other way. Directly at her own body from oblique angles, not usually away from it. She is fascinated by herself as a complex object situated in space, contained in a room where light interacts with her fleshy form during her (muscularly aware and extension conscious) proprioceptor experience.

Kazue Miyahara is interested in dance performance and ceramic statues, using her own moving (like Qing Yang, self-aware) body as well as manipulating and firing coloured clay for figurative sculpture. She has used both in Japanese rice planting festivals.
Pascal Harris has a bunch of photographs in the front alcove of the gallery space, and of them, Desolation Dream is the most dramatic. Showing a pale young Japanese woman reclining in a low-cut black party dress that exposes her shoulders, with her flowing black locks the composition is tonally striking. The angular shapes of the dark fabric, with curving linear hair and the softer greys of her lips and shut eyes, imply—with the work’s title—that her sleeping is about to become turbulent. Urban recreational sophistication is soon to dissolve away. The nightmare will shortly begin.