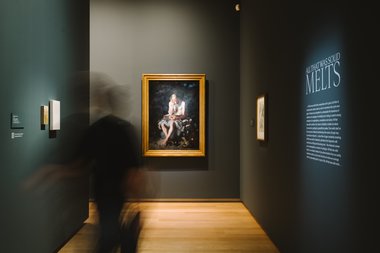 Taking our time, Engberg encourages us to sift through the exhibits (looking at the large pool of possibilities) and ponder the types of contrasts available. This allows you to wander back and forth, in your mind joining up various lines of dots, discovering unexpected correlations and oppositions.

In this multi-layered (very rich) mixture of the Historic and Contemporary, the brilliant Melbourne curator, Juliana Engberg, has assembled a vibrant art concoction to remind us—even when trying to surmount the consequences of a global epidemic or local natural (or manmade) disaster—that in art the past is never far removed from the present.

By using works from nearly sixty artists, many of them represented in the Auckland Art Gallery and Chartwell Collections (plus 17 taxidermied species of Auckland bird from the Auckland War Memorial Museum) Engberg has constructed a dazzling array of interconnected displays, and a wonderful free ‘newspaper’ containing a long sequence of exhibition dissertations that link and expand.

The most obvious aspect of this exhibition is Engberg’s enthusiasm for current practices as well as art history—and how the contemporary and the ‘old’ (or now ‘out of date’) are intertwined. She loves weaving past and present together, whole-heartedly embracing both. The split between the two categories is 50/50, so one is forced to not remain one-sided in one’s attentiveness.

Engberg uses a system of contrasting foils to explore through five ways (internal and external) of elaborating on the notion of disaster and community suffering. She notes the effects on the population through works like Bill Viola‘s slow moving video Observance. The shock and grief that impacts on many filmed individuals (from an undescribed tragedy) are clearly visible in this work.

Taking our time, Engberg encourages us to sift through the exhibits (looking at the large pool of possibilities) and ponder the types of contrasts available. This allows you to wander back and forth, in your mind joining up various lines of dots, discovering unexpected correlations and oppositions.

The external trans-period ones are the most obvious, such as…

Other contributions are more abstract. Halfway through the show, with Tacita Dean, one is pondering ideas on slow time, unravelling spirals and sedimented salt crystals, and through her, Smithson (‘For heaven’s sake Robert, there is no need to go on looking at the clock…if only we could unwind the spiral, it would play back to us all the landscapes it has ever seen.’) and J.G. Ballard.

However in another room, Engberg has tellingly organised a published map by Ferdinand von Hochstetter that documents the relict sinter sites of the Pink and White Terraces adjacent to Lake Rotomahana, and made a few years before the 1886 Mt Tarawera eruption. These two geological ‘transitions’ occur at very different speeds.

Tim Veling’s thirteen butted-up photos of the now overgrown earthquake-damaged eastern suburbs of Christchurch—where domestic architectural traces are now disappearing—are a soothing foil to the eighteen spectacular prints by Piranesi of Roman ruins. One set of the latter is accompanied by a wonderful Untitled Bill Henson photograph where ruined cars replace ruined buildings.

For another pair, Pipilotti Rist and Hilary Roy Clark both depict isolated body parts, the show being a loop in its organisation. Rist’s head and limb bits and pieces hover and fly on video at the end of the exhibition, and partially resurface through the tentative soft pencil facial studies by Hilary Roy Clark at the beginning.

Hélène Binet‘s stark photographs of the ruins of Emperor Hadrian’s villa have holes that make them look like a bony pelvis, while Paul Nash’s photos of bleached long-dead, fallen trees have connections to various limb and arm bones.

The paintings of both Paul Nash and John Holmwood have strong associations with osseous matter, while Giovanni Piranesi and Victorian portrait painter Sophie Anderson are here preoccupied with ruins, one with them as sole visual subjectmatter, the other as a crucial ingredient in a tragic tale.

Marco Fusinato and Julia Morison, deal with class and luxury. Fusinato has a photo of a demonstration where the main placard is Photoshopped to say, ‘The Opera Class goes to Paradise,‘ cursing opera lovers for their snobbery. Morison in comparison has a suite of paintings where she used for ‘paint,’ extravagent liqueurs (crème de menthe, amaretto, crème de cacao, black zambuca, frangelica, cassis, grenadine, curacao, tia maria, cherry brandy) mixed with earthquake liquefaction made from shit, sand and silt. She turns found concoctions, mixed by the catastrophic act of a God who loves wordplay, into smirking satire.

Pierre Huyghe’s video and Marie Shannon’s photograph use animal imagery as metaphor or as hidden referent. With Huyghe, the chimp behind the Noh mask can be inversely matched (high versus low) with Shannon’s witty use of dust bunnies making up a rat. One denigrates ‘high art’ by using a chimp as an insult, the other elevates ragpicking ‘low art’ by giving hidden fluffy crud new life, albeit rodent in form.

Another example is Max Gimblett and Greer Twiss on the horrors of modern warfare: presenting wash drawings and freestanding cast bronze. Or with time and mineral encrustations, Tacita Dean and Katie Paterson, the latter with her wonderful necklace of 170 (handcarved) fossil beads hanging alongside an explanatory wall chart of referenced eras. Or Kate Daw and Mathew McWilliams where media distinctions seem to dissolve and blur, and early stages of technical production (the chronology) evaporate.

With the internal mechanisms, we then have…

(4.) Contemporary references to Historically significant artists (but with work absent) in a contemporary work’s naming. Gimblett is a conspicuous example. He carefully incorporates a Goya reference in his Disasters of War titles for three works picked from a suite of brilliant drawings, that around the corner, play off against Fiona Banner’s Phantom video of her publication made with Magnum photographer Paolo Pellegrin—about London’s financial centre—being methodically destroyed by draught-churning helicopter rotors.

And finally (5.) Genre tension within a single Contemporary artwork (but in two separate parts: one ‘Contemporary’; the other ‘Historic’.)

The late Kate Daw made fake Contemporary and Historic works to be seen side by side. Screened photographs of flowers on calico are coloured in with ‘Victorian’ watercolour; and are presented adjacent to typed texts on canvas quoting from Mansfield, Forster, Le Carré, Murdoch, Spark and Woolf, that by themselves in a gallery look like neo-sixties conceptual art. Mischievous stuff. Confusing from a distance.

In this fascinating and amazingly rich exhibition, art aspires to be art in its vivid most-present tense: the now moment that is the liveliest instant possible, when all is Historic and all is Contemporary. Each encountering experience wants to dissolve chronological classification, leaving only immediacy—and hopefully memories for which erasure is impossible, that steadfastly and absolutely refuse to, that cannot, melt away.