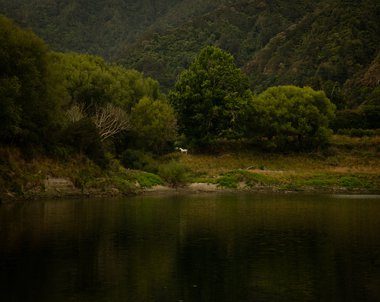 The horse in the ancient world was also symbolic of the life-force, the white one in particular a sign of spiritual illumination. In popular culture the animal has come to represent power for good, though the Book of Revelation has the apocalyptic pale horse representing death; and both life and death are dual themes the artist explores in her work.

A solitary white horse seen from a distance from across a river (the Whanganui) standing in a small clearing at the edge of bush clad hills, might make one think that the photograph taken involved some form of digital manipulation or other more material contrivance, so striking and emblematic is the image. And one could be forgiven for assuming that, because many of the works photographer Tia Ranginui executes, are of the staged kind.

But in this case the large formatted photograph, Mauri ll, is a ‘decisive moment’ image—as in Cartier-Bresson’s famous phrase. What you see is what you would have seen on the day, at the time, here in Aotearoa New Zealand. It is an arresting visual experience, evocative and redolent, with a certain primal intensity about it.

Some force, essence or life energy in terms of Māori mythology, is being invoked, recognised and celebrated here. The horse in the ancient world was also symbolic of the life-force, the white one in particular a sign of spiritual illumination. In popular culture the animal has come to represent power for good, though the Book of Revelation has the apocalyptic pale horse representing death; and both life and death are dual themes the artist explores in her work.

The photograph itself and the mood it captures comes straight out of the Romantic Movement. One can imagine Wordsworth going into raptures, or Casper David Friedrich, or again Delacroix painting such a brooding and pregnant image. Both primordial and paranormal, the river that reflects a blurred image of the vegetation from the surrounding hills simply adds to the mysterious power and potency of the picture. We are taken back in time to a place in folk lore, yet we are in a real place in the present in Aotearoa New Zealand. That is the magic of it. We have one foot in present reality while the other is placed in mythical time.

This is the first in a series of eight photographs from the work of Ranginui on show at the new Laree Payne Gallery, positioned itself overlooking a river, the Waikato, in the heart of Hamilton city.

The second non-staged work, Mahia, depicts a pebbled beach from an elevated perspective. We are on the East Coast, south of Gisborne, again a remote location looking at an agitated sea against a shore filled with stones, the whole image suffused with extraordinary blue tinges and tones.

The photo is severely cropped so that all horizon lines are excluded, creating a certain concentrated focus and singularity. Shingle beaches are rare in the North Island and because of the moody blue colour that saturates the image, one could easily think we are in the vicinity of Matthew Arnold’s Dover Beach with all its implications. But this is Aotearoa New Zealand and what the artist has captured here, without artifice or photo-shop manipulation, is the sheer raw beauty of a singular shoreline, tucked away in an unprepossessing part of the coast. Not melancholy but a celebration of the magic and glamour in the mundane, is what we are witness to.

Te Ao Marama is the third non-staged work in the show, a shot of the early rising sun filtered through dark flimsy foliage covered in wheels of spider webs. The title references the creation story in Māori mythology. ‘Let there be light’ is a universal trope, and here, because of its compositional format, one is reminded of the illumination that the painter van der Velden captured in his Otira Gorge works.

Of the ‘staged’ photos, the two that play off against each other, Ghost Moth and Maui has a blue tongue, engage with the perennial themes of life and death. The former, depicting a young pubescent girl laid out on a thick sward of grass like a sleeping princess or innocent sacrificial victim, hair flung out like some young Medusa figure, sees the puriri moth employed as a distinctive symbolic device, scattered through her wild hair. The moth in its caterpillar stage can last up to 6 years, while the moth itself lives for only a few days. The girl is yet to awaken from her childlike life to her adult life, whose span is brief, according to the Psalmist - “as for man, his days are as grass”.

Its companion piece sees another young girl lying back naked, this time on a heavily floral designed Axminster carpet, and presents as an engaging domestic and perhaps politicized rendition of Maui’s attempt to secure immortality, complete with pet Australian lizard as prop. Maui, the shapeshifter, transforms himself into a worm in order to enter the vagina of the goddess but is crushed to death in the process. Sex, death and the male prerogative are being provocatively and coquettishly played with here in this clever reinterpretation of an old tale.

More overtly political are The intellectual ‘POWER’ of a savage mind and The intellectual ‘WEALTH’ of a savage mind. The Savage Club was founded in 1857 in London, a gentlemen’s club involving musical performances and sketches, the format of which spread to the colonies, and here in New Zealand one of the branches established itself in the artist’s home town, Whanganui.

In today’s more enlightened times, the faux representation of Maori carvings framing the stage of the club and the club’s presidents, all Pākehā, called ‘rangatiras’—together with performances where members dressed up as ‘savages’—are regarded as offensive, much like the Black and White Minstrel shows from a former age.

Ranginui makes her views unambiguously known with her photo that positions a balaclava wearing woman sitting guard with rifle cocked in the foyer of the club where crude and objectionable images of Pākehā appropriating traditional Māori costume crowd the walls. Its companion piece comes as a rejoinder, depicting the interior of a Whanganui marae, a stack of foam mattresses piled up against a wall with an enigmatic arm sticking out from under the third layer down.

In all of these works the common element is the presence of something slightly inscrutable, the manifestation of the mysterious where tone, light and composition help layer the images with often an otherworldly aura and feel.

A show not to miss, and a show that demonstrates what the medium is capable of doing today in Aotearoa New Zealand.