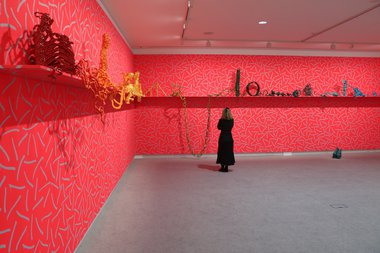 Associations of food abound. Some sequences even seem bodily, referencing ribs, tongue, and phallus; occasionally fence-like grids. On closer observation one can discern the use of cake-icing equipment, producing trail-like flows similar to the way ice cream spirals into a cone from a machine. In one section, a chain descends from the shelf to nearly touch the floor only to rise and resume its journey.

As you step into the exhibition space, Chromasill threatens to overwhelm. It’s a space with surprising optical sensations, and where curious abstract forms and vibrant colours strive for attention. Immersive, theatrical and delightfully playful, the installation pulsates with a hypnotic rhythm.

Crimson coloured walls coated in a sea of gently curving lines (all of equal scale) exude a tantalizing buzz. Short and freely painted, these pale blue-grey lines create an optical frenzy against the background, a never-ending assault upon the retina. As contrasting colours collide, the artist cleverly articulates their optical power. The impact of one colour-tone on another is at the heart of Chromasill, generating a sense of movement as the walls destabilize, as if breathing.

The wallpaper-like patterning also engulfs a single shelf, a 300 mm wide ledge that wraps around three walls, teasingly placed out of reach above the height of the average person. Operating as ledge (or is it a sill as hinted at in the show’s title?), the shelf becomes a playground—a stage—for a performance of interlaced linear forms. A continuous sequence of tangled shapes ebbs and flows around the room, like a train, in glossy rainbow colours— reds, oranges, puce, yellows through to green, blues and inky dark tones—as it takes the viewer on a journey.

The pieces retain clear evidence of the artist‘s fingerprints, and rejoice in the tactility and plasticity of wet clay. Shiny glazes generate a festive feeling in a work that almost defies it’s made of rock-hard fired earthenware.

Associations of food abound. Some sequences even seem bodily, referencing ribs, tongue, and phallus; occasionally fence-like grids. On closer observation one can discern the use of cake-icing equipment, producing trail-like flows similar to the way ice cream spirals into a cone from a machine. In one section, a chain descends from the shelf to nearly touch the floor only to rise and resume its journey. A stand-alone piece on the floor feels at odds, curiously disconnected, as if without a clear role in the overall performance.

Janna van Hasselt‘s exhibition is an invitational show initiated by the gallery. As the winner of the Premier Award in last year’s Zonta Ashburton Female Art Award, and hosted annually by Ashburton Art Gallery, the artist was offered a solo exhibition, presented alongside this year’s Zonta finalists, on show in an adjoining gallery space. Her entry, a domestic-scaled piece titled Totter (an image of this work is included with this article to give context), was a chaotic riot of exploding forms glazed in red and blue and, undoubtedly a forerunner to Chromasill.

Currently, ceramics are to the fore in New Zealand Aotearoa’s art scene. In part, van Hasselt’s approach relates to a dynamic wave of ceramics embraced by the likes of Andrea du Chatenier and Virginia Leonard, where intangible, theatrical forms explore the absurd. Both these artists are acknowledged for their energetic take with clay and their use of rich, heady, molten glazes. Chromasill also recalls the sensations generated by Yayoi Kusama’s striking installations, where simple repeated dots swamp both gallery space and viewer.

Pattern and vibrant colour have long played a significant part in van Hasselt’s own practice, becoming almost her signature style. Standing in Chromasill an extraordinary feeling of vertiginous energy threatens the viewer’s equilibrium—as well as acknowledging the potential, and challenges, clay offers as an exciting medium for contemporary dialogue. 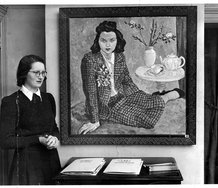 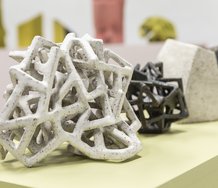 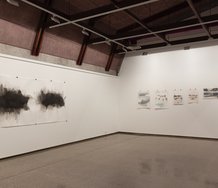 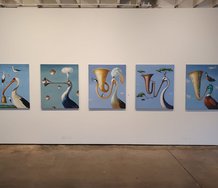