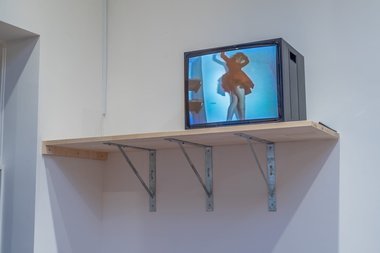 The eighteenth century aristocratic French soldier and novelist, Xavier de Maistre, is a precursor to this Gus Fisher theme. The first of two satirical books, 'A Journey Around My Room' (1794) and 'A Nocturnal Voyage Around My Room' (1825), was written when he was under house arrest for duelling. These books later made him the darling of the Surrealists. And Jorge Luis Borges too.

In a Gus Fisher show that oddly seems to extol the pleasures of claustrophobia (perhaps through the frenzied joys of then breaking out) these seven artists mostly dwell on close proximity, the small rooms they inhabit, or the window it forces them to look out of. The ‘square’ can be Covid related, but not necessarily. It can be a space, dwelling, city, country or even a planet. The point is that of restriction or confinement as a generating quality to spark off art.

The eighteenth century aristocratic French soldier and novelist, Xavier de Maistre, is a precursor to this theme. The first of two satirical books, A Journey Around My Room (1794) and A Nocturnal Voyage Around My Room (1825), was written when he was under house arrest for duelling. These books later made him the darling of the Surrealists. And Nietzsche, Borges and Sontag too.

Lucy Gunning’s video Climbing Around My Room (1993) is presented on an old television positioned high above the viewers’ heads. The British artist films an acrobatic young woman barefooted in a short red gown, clambering along the shelves, mantelpiece, wardrobe, windowsill, skirting-board, coat-hook, door handle and bookcase that line the walls of a bedroom, trying to avoid touching the floor at all costs. Travel here may be a mental project, but also it involves gymnastics, flexibility and stamina. The work can be interpreted as providing voyeuristic pleasure for the filmer and viewer, or an act of sublimated onanism for the performer (coitus via tactile interaction with the architecture of a chambre)—a strange understated eroticism being pleasured by walls.

Deanna Dowling’s Notes on Time (2021) reveals the results of her obsessively sanding, by hand, the painted inner walls of what was once a narrow phonebooth, grinding away different layers of colour, each exposed hue a partial record of exhibitions presented decades earlier, and earlier before that when the venue was a radio station. All these abrasive ‘sores’ are maintained in close proximity, dry ‘wounds’ that are never far apart at all. For us to study.

Jeremy Leatinu’u’s Building Monuments and Folding Forts Upon a Slippery Ocean and a Moving sky (2021) takes the large room and with repeatable collapsible cardboard modules—and blue tarpaulins for the outer walls—creates a tightly fitting blocklike building within a building; later to transmute that into a system of menacing towers. His temporary constructions dominate the visitor, controlling their movements, demanding their subservience (it could be argued) to an ‘Island Mentality.’

Józef Robakowski’s From My Window (1978 -1999) [See here] was made over a period of twenty years. Through the window of his ninth floor apartment in a towerblock in Lodz, this Polish artist filmed strangers, acquaintances, friends and bureaucrats alike, walking (sometimes with their dogs) across the busy adjacent square, and when he can, filling us in on slightly gossipy details about them and his local Polish community. Robakowski’s project is both voyeuristic (it’s cheeky but not creepy) and entertaining.

Hiraka Sawa’s Dwelling (2002) [See here] uses different heights and angles in assorted rooms for filming hovering, descending or ascending aircraft, for the artist’s small apartment becomes an international airport. In this wonderfully surreal film we see hordes of passenger jets traversing across intimate domestic interiors and flying through half opened doors-with made beds and Formica tables being used as runways. The last plane seen is observed through a window, faraway in the overcast skies outside.

Tanuvasa’s project features four disconnected sections of swirling gestural painting and stitched motifs—using suspended fabric and curved wall as support. Unlike the other contributions discussed so far, this mixture of ‘Twombly’ and ‘Matisse’ motifs is not an effectively coherent statement about inhabited space, though the diagonal banner component certainly has impact working against the parquet floor and pale walls beneath the dome. The piecemeal properties of her spatially fragmented painting—in this context—prevents it from fitting in easily into the theme embraced by the other artists.

Barnett’s underwater sound recordings however do, partially because sound recorded underwater—strangely by its very nature—lends itself to the (illusory) oppressive sensation of deep water immersion. The pressing weight of the liquid as an aural / mental catalyst (along with the brittle delicacy of the aquatic noises) generates its own kind of pleasurable sonic presence.