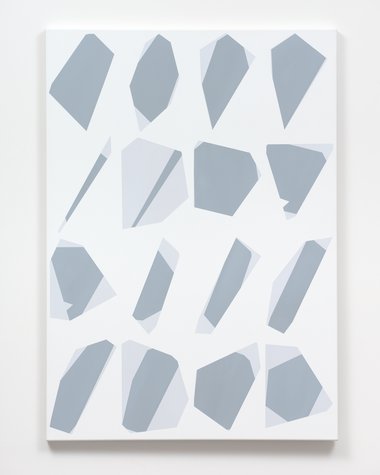 The raised edges on the painted canvas of the once masked off forms (traces of the positioned tape) are important as an indication of the most recent paint application. Natural light from the gallery skylight gives you directly experiential information about Shin's attempts to control depicted illumination via layering of angular shapes.

The two works at the start of the show feature angular shapes of a dark grey tone and a mid grey tone placed on a field of very pale grey. The large work at the end of the line up has no dark greys, only mid grey forms on very pale grey. ((Although it is pathetically strange to describe painted tones with limited words like this, as verbal approximations, they do hint at the optical tensions involved.))

So, to continue: In between are four similarly vertical rectangles incorporating on a pale grey field, shapes of mid grey and others of white. The white forms have been constructed last of all and overlap the others which are then seen through the white transparency.

Your restless eye compares the two or three individually-toned shapes with their negative shapes in between—searching for matching contours in adjacent configurations—in order to create assorted neighbourhood links. Seeking out rapidly ‘soon-to-be-fading as irrelevant’ duplications.

The raised edges on the painted canvas of the once masked off forms (traces of the positioned tape) are important as an indication of the most recent paint application. Natural light from the gallery skylight gives you directly experiential information about Shin’s attempts to control depicted illumination via layering of angular shapes.

The zigzagging (stark-) white on pale grey forms create an optical flutter, hovering in isolation like ghostly translucent cabbage butterflies, and that pulse is the real pleasure, the true delight, of these paintings. As is also the filmlike thickness of each outer quadrilateral layer, its ultra-delicate weight, its traversing spreadability that pivots the material into a forceful wall-pressing vector.

Short of being in the studio yourself and closely watching Shin at work on these canvases—fastidiously mixing pigments or diluting varnishes, analysing the impact of carefully controlled light—despite Janine Randerson‘s valiant explanatory efforts, and the inevitable uselessness of documentary photographs, the spaces between the units, and the precise positioning of the intricate geometric elements, remain a mystery. For all their apparent order, their placement seems unabashedly intuitive.

Those details don’t matter. In the artworld, rigorous method, process and ideas tend to be over-rated, for they only merit attention if the end result—such as its optical structures (the flickering pulse) and detectable logical qualities (tape edge as marker of sequential position)—sufficiently excites the viewer’s curiosity about origins. Shin’s procedures seem to be more difficult to grasp than say Kenneth Martin’s chronological dice drawings or Dorothea Rockburne’s folded vellum works. Shin doesn’t operate in a laboratory with exact details listed on a clipboard for other artists to confirm scientifically by replication. There is nothing robotic about her practice.

Shin’s sharp slivers boldly hover—to evanescently shimmer and wiggle—and then submerge into the mist if you get distracted, take a step sideways, look away to then look back. Dancing flashes of asymmetrical energy abound. Morphologically inventive but meteorologically reliant, they are gentle and subdued.

If one wants to see consistency of direction in contemporary painting Jeena Shin is a great example. Her subtle abstractions ...

If one wants to see consistency of direction in contemporary painting Jeena Shin is a great example. Her subtle abstractions have evolved with studious exploration of the invisible 'grid' within the structure of her paintings producing delicate and sublime effects.
Wonderful show.