From Understated Restraint To Histrionic Excess 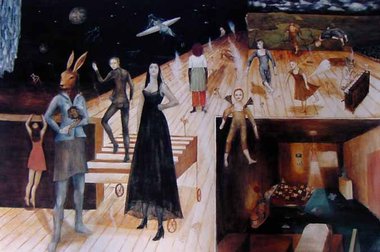 Pick's liquid acrylic works on paper are also a treat, having an appealing looseness that contrasts with the swoony Pre-Raphaelite rigidity of many of her oil paintings.

Seraphine Pick is a popular and much loved narrative /surrealist painter who reaches a large audience often befuddled by the intellectual complexities of other varieties of contemporary art. A large selection of her varied images, made from the mid-nineties on, has been assembled by Felicity Milburn for this touring survey.

The material is sorted into four large rooms. The first space, an L-shaped gallery, has the oldest examples and contains her best work in my view - scratched or pencilled images on green or buttery-brown monochromatic fields.

These graffiti-style canvases are like Twombly or Beuys or much fifties French painting, and exploit tremulous clusters of scribbled or drawn pencil line that are hard to see. They often portray daily tasks around the house,fantasies of hetero female horniness, and little textual snippets. Pick’s use of scratchy pencil on airily expansive fields brings an affective intestinal nervousness to these paintings, especially when combined with the occasional hovering black silhouette. There are also slightly earlier paintings of rendered items of clothing or objects floating in space at regularly positioned intervals. They hint of other projects to come.

Things get more complicated in later periods with a wider range of painting styles (a lot of portraits) that often mimic influential international role models such as Marlene Dumas and Luc Tuymans or New Zealand art historical figures, Raymond McIntyre and Rita Angus.

The worst of these are dark or Fauvishly garish, and hammily theatrical in their sense of Gothic melodrama. They are akin to Ashley Bickerton’s painting in the first Auckland Triennial, or Phil Judd’s famous Split Enz ‘Mental Notes‘ LP sleeve, in their histrionic, highly emotive use of exaggerated gesture or facial expression; and are unabashedly corny - pitched to viewers of X-Files who long to shudder and twitch.

As Pick’s figure drawing is generally weak (human forms tend to look stiff and bodily inflexible) her real talent lies in fantasy portraiture where she is not twee or fey, and doesn’t have to cram entertainingly peculiar props into the background, but can concentrate on a single face - be that human or animal. Her dog visages are remarkable, though you won’t be able to tell from this show because Milburn has hung them too high on an end wall. Pick is a far more interesting animal painter than say Joanna Braithwaite. The canine physiognomies she creates have unnervingly vibrant personalities.

Pick’s liquid acrylic works on paper are also a treat, having an appealing looseness that contrasts with the swoony Pre-Raphaelite rigidity of many of her oil paintings. As an artist she is versatile, while also inconsistent (awful figure posture but extraordinary fabric or clothing detail), so while a show of just portraits would more successfully hide her weaknesses, the range of her work here exposes them. Though I’m not convinced she has the talent or experience to deserve a touring exhibition of this type, it is good to have had the opportunity to think about the pros and cons of her practice in this large, thoughtfully arranged and surprisingly varied, display.