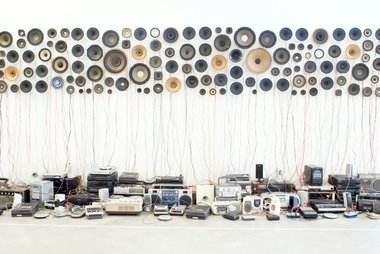 As with any of these kinds of events, the work was multifarious in terms of approach and (much less so) quality. Overall, however, there was a noticeable dedication to making work and engaging the senses.

This week SITE ’09 presented the work of The Dunedin School of Art’s graduating students. With recent cuts in funding fuelling changes to its teaching programme, and talk of a potential cap on the number of new and returning students in the future, I was interested to see how student work had fared in an environment of fear, uncertainty and doubt. As with any of these kinds of events, the work was multifarious in terms of approach and (much less so) quality. Overall, however, there was a noticeable dedication to making work and engaging the senses.

For me, a stand-out work is Alex Mackinnon’s A Deaf Piano, a sound installation involving no less than 130 audio speakers, 34 tape loops, 50 tape channels, 40 digital audio channels, various tape and CD players and amplifiers and 300 meters of speaker wire. Exposed audio speakers of various sizes run down coloured wires to a plethora of sound gear. Each speaker, wire and piece of sound gear makes its own audio channel. The wires are like the wires of an exposed upright piano, the speakers are like its hammers and the gear its keys. A Deaf Piano is an instrument made for sound-as-music, as much as any piano. It can be heard as a myriad of flat-line electronic sounds that merge to produce a constant drone that is modulated by intermittent interference-like sounds that tweak the work’s harmonic range.

While on the verge of being oppressive, the sound creates a strangely pleasing and intimate field of experience and interest that is visually confirmed and enhanced by the stripped-bare instrument on display. As the artist wrote as part of his year’s project, the work is bio-acoustic. It plays on Hermann von Helmholtz’s nineteenth century theory that related the physiological experience of hearing to the mechanics and practice of music making. Mackinnon responds to Helmholtz’s suggestion that the tiny hairs of the ear canal are the same as the wires of a piano. Each hair is tuned to a specific frequency. When in full sustain these wires give the mind a reproduction of the full and infinitely detailed acoustic world. The instrument that ultimately makes Mackinnon’s work possible is innate and is celebrated as such.

It is the attention to making a ‘piano’ that is deaf to any musical preconceptions that places Mackinnon’s work in the artistic realm of experimental music. It brings to my mind Phillip Glass’ watershed art music performances in New York galleries and lofts in the late 1960s and Douglas Lilburn’s New Zealand music-changing electronic studio and compositions of the 1970s. Bringing it into the present, it teeters on the edge of a predilection for a wall of noise. At the same time, the work brings to my mind something of the sculpted spatiality of James Turrell’s light works that have helped push the phenomenological boundaries of sculpture from the 1960s onwards. Although Mackinnon is working with sound waves rather than light rays.

The installation of jewellery artist Priyavanti Makwana also engages the senses. Presenting works from her Lotus and Soogandh series in a small room, she encloses the visitor in an aromatic field created by the star anise, vanilla bean and cardamom pods showcased in her necklaces. A work such as Soogandh IV presents a vanilla bean pod pendant that would scent the skin of its wearer.

Jude Robertson’s sculptures Spill, and Ubiquitous, Ulex Europaeus, parts of her installation Ecological Score are also impressive. Spill is a floor-bound spill of 7,000 very small cast soap houses. Its slightly caustic smell and invasion of the ground plane evoke the outflow of household waste. Ubiquitous, Ulex Europaeus, which takes the form of a large rug-like floor covering is made from what could be every part of the Ulex Europas, or common gorse plant – its spiny leaves individually inserted and combined to produce a spiny ridge that traverses the work, dried and ground flowers forming its border, desiccated foliage and wood making flat areas reminiscent of cultivated fields seen from the air. With its map-like quality and evocation of a colonized landscape the work made me consider the often noxious landscape-defining activities of humankind made obvious in the introduction of gorse to New Zealand.

Melissa Trainor’s series of self portrait-like photographs taken with a self-constructed pinhole camera and Kate Vander Drift’s three channel video installation are also notable. Utilizing the pinhole camera’s ability to simultaneously encompass multiple viewpoints and the almost explosive qualities of light in the images produced, Trainor explores the limits (or not) of self perception. Vander Drift’s installation Silencing Dissent comprises a video played on each of three walls that enclose the domestic dining room table and chairs seen on screen. In her three channel video Domestic Terror three family members sit at the table and are served various glossy and colourful drinks and cupcakes along with the Otago Daily Times.

On leaving SITE I could not help wondering how well the New Zealand art system would support such graduating students dedicated to a practice of making. In a country where contestable funding is becoming ever more contestable and available funds regularly diminish, what kind of a practice will these artists be able to support? And what of the future of our art schools? Is it enough to accept that students can make stand-out work, even under duress?

Photographs of A Deaf Piano, by Markus Gradwohl, courtesy of the artist.