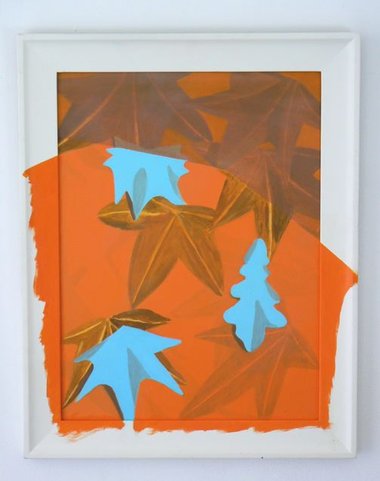 She’s turning into a sort of Fauve Charles Tole, using a simplified cubist structure but without being overly concerned with radical spatial depth and perspective – more a Matisselike interest in shape and chromatic chords.

Yellow is the putty of the world

These ten recent paintings from Saskia Leek show her transition away from paler, more detailed and illustrative imagery towards a more abstract sensibility; an interest in an interlocked picture place – accompanied by a bolder, highly saturated (without being garish) warmer colouration.

She’s turning into a sort of Fauve Charles Tole, using a simplified cubist structure but without being overly concerned with radical spatial depth and perspective – more a Matisselike interest in shape and chromatic chords. With a design sensibility that varies in its flatness, Leek renders buildings, bowls of fruit, a bridge over a moonlit river, and falling autumn leaves. They often have a lyricism through arabesque shapes, especially with the bowls of fruit, where she experiments with volumetric structure, though still clinging mostly to the picture plane.

In many of these works Leek’s palette is dominated by yellow (hence the exhibition’s title) a notoriously difficult colour with which to generate a tonal richness, and not have appear garish. Obviously it alludes to sunlight, and the uplifting, buoyant mood that generates.

In this show Leek often varies her method of mounting, sometimes butting her oil painted board against a gesso painted frame, or having the painting tucked in just under the frame lip, or (most of all) float mounting it away from the frame altogether. Also, with some austere ‘experimental’ works involving stark shapes of buildings, or leaves, she sometimes paints (with thin smudges) onto the frame, extending her pale image and with its unexpectedness, generating an emotional release in its surprise. It seems spontaneous, and quite a contrast to the tighter, more carefully shaped style of most of these images. Other works are very graphic and utilize flat shapes and few colours, as if printed in a book and not painted.

Leek in her current work seems more than ever to be achieving a focused condensation through her manipulation of shape and placement of chroma. There is an articulated awareness of the board’s four edges and an attempt to achieve eloquent density of form. She is quite similar to Isobel Thom and her self portraits because of these concentrated mark/shapes, but much more interested in colour’s play on form – as opposed to that of light – and not prone to grouping separate images together on panels. Both artists make images that have an intimacy and compactness.

The best Leek works have that sense of inevitability that comes from apparently effortless composition, the feeling that only the shapes we are seeing (and their location and alignment) could ever happily describe this arrangement of objects to generate this particular mood. Remove one daub and the image (and its attendant atmosphere) disintegrates.