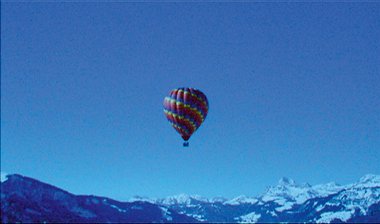 Compared to the previous bloated, and largely inane Triennial, 'Last Ride In A Hot Air Balloon' has achieved liftoff. Of course it is not without its flat spots and inconsistencies but show me a similar event that nails every aspect.

It’s a very brave venture to examine risk as a trope of contemporary art. We immediately expect to be challenged, to see the status quo punctured or picked apart and to at least interrogate the possibility of new modes of social/cultural transformation. Of course risk is an elusive concept and one that does not neatly align with the rhetoric of avant garde transgression. There is a profound elasticity to the term that extends well beyond being shot in the arm for art or masturbating under the gallery floor. Such 1970s ideas about risk still resonate in the popular consciousness when risk is aligned with contemporary art even if the modes seem fundamentally old school and historically specific. While the mechanisms have shifted with our more complex globalised world, risk is still a staple component of art practice both as a subject matter to be dissected and as a critical mode of operation. Natasha Conland has decided to put a ruler under this terrain with her chapter of the Triennial choosing a targeted suite of artists for whom risk and adventure are fundamental concerns.

Trying to get a handle on how Conland locates risk is not however a straightforward enterprise. She is careful to articulate a number of registers by which artists rub against the grain and these straddle the overtly political through to the barely visible. Conscious of not privileging but at the same time not excluding an activist mode, Conland lays out a breadth of practice to suggest the multifarious nature of risk in recent art. At one axis we get the grating in your face posturing of Australian artist Richard Bell tearing at the flimsy veneer of multiculturalism. His hilarious gangsta/gonzo/psychiatrist persona performed in Scratch an Aussie and Broken English is a razor sharp dissector of aboriginal stereotypes and white ignorance. The didactic message of black resistance is couched in Bell’s work through an accessible, if incendiary, satire that takes aim at the breathtaking indifference of white Australia to black identity and history.

This overtly polemical strategy sits in a different space to the practice of a number of Middle Eastern artists who couch risk in far more delicate ways. The work of Iranian artist Mahmoud Bakhshi for instance, is potentially riskier, if superficially appearing to be more politically inert in its content. His sculptural installation Sunsets consists of a series of cigarette shaped cylinders each of which emits a recitation of a different chapter of the Koran. The audience are able to move the cylinders to create different sonic arrangements. While the work initially feels benign in its critical aspirations, the powderkeg politics of contemporary Iran and the fact the artist is based in Tehran provides a crucial context to the work. The idea of individual agency and decision making is clearly subversive in the context of the crackdown against the so-called Green revolution upping the stakes of the work considerably.

A similar though ultimately more successful edge pervades the work of fellow countryman, Shahab Fotouhi. The artist restages a number of the components of the famous helicopter ride of Ayatollah Khomeini on his triumphant return to Tehran in 1979. Employing scaffold-mounted floodlights together with neon tubing that physically plots out the route, the artist also displays documentary footage of the messianic event on a small monitor, using a mixture of found and crafted objects to investigate the staged spectacle of Khomeini’s return in a highly understated way. His comparative lack of partisan editorialising - the deadpan matter-of-factness of the installation - is ultimately a nuanced device to shut down one-dimensional interpretations of political subversion. By allowing us plenty of space to join the dots, the work suggests a whole lot while making it difficult to pin a fixed meaning down.

The attempt to establish a balanced tone between big picture politics and the poetics of objects and sound permeated a number of the works in the Triennial including Shilpa Gupta’s microphone cloud, airport display board, Sharon Hayes’ Everything Else Has Failed Don’t You Think It Is Time For Love, and Tom Nicholson’s beautifully layered deconstruction of the Burke and Wills story Monument for the Flooding of Royal Park. Yet positioned in relation to these works were a number of pieces that seemed to stretch the curatorial parameter too far. Michael Stevenson is certainly an artist known for skewering an extraordinary array of cargo cults but his video work On How Things Behave seemed to be more about the vagaries of artistic philosophical meditations with a poke at Daniel von Sturmer than about adventure or risk. Likewise the very chic relational aesthetics poster boy Philipe Parreno seemed out of place with his Marquee which in no way destabilises the conventional art viewing experience as claimed in the exhibition brochure but functions as a kind of low-fi, low-impact, largely lame entranceway.

One of the things the triennial highlights is that risk and adventure are not the same thing. Mostly the works embody one but not both of these traits. Marine Hugonnier’s evocative videos of markedly different locales are a rare example of the curatorial synthesis, being both potentially dangerous in outcome yet redolent with the excitement of discovering new places. Other work like Johanna Billings This Is How We Walk on the Moon says nothing of any substance about risk and evacuates most of the joy out of adventure.

I was completely captivated by Alex Monteith’s four-screen surfer treatise Red Sessions which might be one of the best surfer movies ever made partly because it was so immersive and transfixing and partly because the Beach Boys were not tinting the experience with cheese. Laresa Kosloff’s super eight film Trapeze was similarly compelling capturing the rhythmic pleasures and synchronised movements of two trapeze artists practising in the main street of Melbourne.

My desire to comment on the work of Tino Sehgal and Martin Boyce, two of the bigger names in the triennial was unfortunately thwarted by St Pauls St galleries wisdom of closing on the Sunday of the first weekend while so many people were in town meaning my knowledge of the work was confined to dancer choreographer Anna McCrae’s description in the panel discussion on Saturday. I hope to be able to revisit this down the track.

Compared to the previous bloated, and largely inane Triennial, Last Ride In A Hot Air Balloon has achieved liftoff. Of course it is not without its flat spots and inconsistencies but show me a similar event that nails every aspect. The vagaries of artists changing course late in the piece nearly always ensures the best laid plans go flaccid in places and there is a lot of really good work here to enjoy regardless of the overall schema. The new venue Shed 6 is a bit rough and ready and a long way from the Sydney Biennale’s Bond Stores or Cockatoo Island. It feels like a glorified artists studio in an industrial area and seems a bit too small and light to hold all the work that it does. While I hope we do not see it utilised in future manifestations, I concede the mutli-site aspect adds a range of flavours to the Triennial’s connection with Auckland. This fourth edition has ramped up the ambition and relevance of the event and set out a polemical and carefully layered matrix for drilling into key strands of global contemporary art practice. That in itself is a high risk strategy.