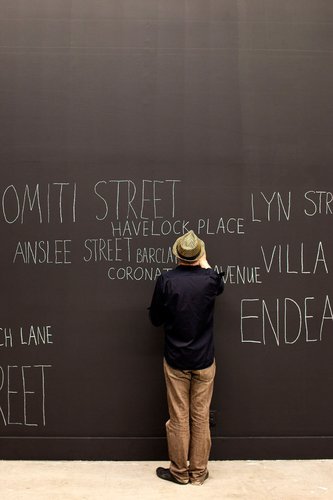 While the artist clearly loves the elusive possibility of words I found myself beginning to doubt their capacity for any real profundity. Juxtaposing so many different literary modes against one another rendered them flatly equivalent, making it harder to care about both the edgier political dimensions, or the fandom obsessions of a rock band's set list.

Standing on the pavement of the White Hart Hotel in New Plymouth looking at John Reynolds’ LED road sign I was flummoxed. Flashing in front of me were repetitive textual bytes that listed a litany of dead philosophers and the ways in which they had died. It was hard to view the sign in the late afternoon light and the passing cars would barely have sensed its presence, but this was not ultimately what troubled me.

Having spent a few hours grappling with Reynolds’ many and varied interrogations of the discursive permutations of text in art, I had become inured to the potential power/value of the texts. Song lyrics, New Plymouth street names, the index to Deleuze and Guattari’s A Thousand Plateaus, writing on the Middle East conflict by Robert Fiske, these were just some of the many and varied sources for the artist’s various artistic iterations. Ambitious in scope, and demonstrating a heightened level of cultural capital, the exhibition looked slick and savvy but ultimately the nagging question was what greater purpose did these textual meanderings serve?

Reynolds’ sweep through philosophy, popular culture, New Zealand art history and the New Plymouth vernacular in the fourteen works on show suggested a firm belief in the possibility of synthesising eclectic content around his signature aesthetic/sensibility. The Reynolds touch - his distinctive graphic style and refined use of language - more than a broader coherent critical schema, was seen as the requisite glue to pull the show together. Dexterous as he is as a painter, it is the absence of a larger programme that makes this major survey flaccid. It’s as if the artist has constructed a range of discrete sketches across a multiplicity of fronts believing that that the sum will somehow equal the parts. The cult of personality angle was certainly perpetuated in the galleries supporting material where the artist is described as a ‘trickster’. Yet it is hard to see where in Nomadology: Loitering with Intent Reynolds disobeys normal rules and conventional behavior. Mixing philosophy, politics, street names and the lyrics to an AC/DC song seems to this writer to be a recipe for a very trickster-lite identity at best.

Reynolds is too sunny to be a trickster and certainly too family friendly. His excursion into participatory art Hells Bells, gave the audience an opportunity to make their own sentences from lyrical fragments of an assortment of songs used by the America military to torture detainees. While an acerbic political statement, the caustic undertone was largely usurped by the relational setup and candy coloured modules. Of course this sharp incongruity was the point of the work, but in a room with mariachi lighting and every street name in New Plymouth chalked on the surrounding walls, the statement was buried in an overload of signifying systems. Everywhere you looked the artist was riffing on something different, the phenomena of twitter in Twitterature: The Iliad by Homer, a meditation on the Arabian Nights, the vagaries of acronyms. Each had at least a kernel of interest as a discrete component but experienced as a whole the effect was one of conceptual pot pourri. While the artist clearly loves the elusive possibility of words I found myself beginning to doubt their capacity for any real profundity. Juxtaposing so many different literary modes against one another rendered them flatly equivalent, making it harder to care about both the edgier political dimensions, or the fandom obsessions of a rock band’s set list.

The best work in the show was the least demonstrative, allowing Reynolds to use his modular modality to its best effect. Birdsong (Corner of King and Queen) consisted of small monochrome canvases with clearly prefaced drips of paint, stacked floor to ceiling. The work played cleverly with the architecture of the gallery linking the bottom and top spaces together while also building a compelling connection with the rectangular component of Len Lye’s rectangular kinetic sculpture Trilogy. The work spoke volumes about the languages of painting, architecture and their assorted materialities without requiring a single word to preface its meaning.

It says a lot about the Govett-Brewster’s belief in John Reynolds’ standing that not only did he secure the majority of the gallery spaces, he did so to mark the 40th anniversary celebration. This was something of a missed opportunity. Perhaps a smaller, tighter showing of his work in tandem with other connected practitioners might have been a better bet. Failing that at least a much tighter curatorial focus was required so that there was significantly more coherent intent to the artist’s loitering.

The photographs here were taken by Patrick Reynolds. In descending order these installation images are as follows:
1. 1001 Nights 2010 (detail). 2. To Die Laughing 2010.
3. To Die Laughing 2010 at the Govett-Brewster hits 40 pARTy. 4. Foreground: Works End 2008. Background Nomadology 2009. 5. & 6. Hells Bells 2010. 7. John Reynolds working on By The Roads And Fields 2010. Photographs courtesy of the Sue Crockford Gallery, Starkwhite, the Govett-Brewster Art Gallery, the photographer and the artist.