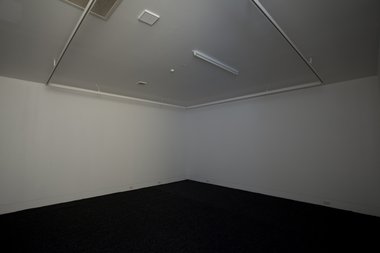 Richard Francis's 'Two Forms of Nothing' reveals his interest in sound qualities that most people would not be aware of, aural sensations that are ubiquitous but not regarded as attractive or worthy of attention. These barely audible, vague ‘grey' noises, often akin to old records left running on turntables after the music has ceased, seem to be variations on rubbing, crumpling, hissing and buzzing - with a low pulse also coming out of the walls.

‘Wall of Sound’ is the term popularised in the early sixties when applied to the densely layered, echoey aural values of pop music producer Phil Spector, when he used many musicians playing identical parts to heighten the emotional impact of singers’ voices. In this Stephen Cleland curated show, the term probably works best when applied to Clinton Watkins and Melbourne artist, Marco Fusinato. Their walls are ‘vertical’ and (mainly) visual whereas for Lislegaard and Francis, the planes are ‘horizontal’ and solely aural.

Fusinato’s installation literally features the walls of the gallery. They bear 4 racks that present for display 100 records made of transparent plastic, pressed by a company in Christchurch (King Records). Each disc has been ‘grooved’ according to drawings on tracing paper provided by the artist, and 10 of these have been mounted, framed and included. The records have zero sound; their grooves are not embedded with music.

These clear silent records look gorgeous. Gallery light pours through their surfaces so that the ripples and spiralling striations cast shadows on the Te Tuhi walls. This makes these dark lines very striking, hovering behind the shiny reflective ‘platters’.

With the installation of Clinton Watkins a wall of constantly changing, moving coloured bands of light is the result of an electronic sound composition. His abstract film has not been made first with the sound then added. Rather he has invented a process where the composed sound waves are ‘translated’ into thick straight black and white, or coloured, or tiny squiggly, visual components. Sometimes they move vertically, other times horizontally. Sometimes they are simple elongated rectangles, other times fragmented granular scatterings.

Though I personally think sound is a much more emotively penetrating thing than visuality, in this work the brightly saturated colour floods the room and immerses the spectator. You become aware of the aural aspect later and the way Watkins has paced the ‘soundtrack’. Much of it is slow and draggingly lethargic in its drones and hums, only to suddenly switch to brief but rapid frenetic bursts like popping machine-gun fire. Subsequently you need to hang around and see/hear the whole cycle to grasp the work’s overall structure and dynamic. That is difficult to realise because with the three sound works you are not told the length of their duration.

Richard Francis’s Two Forms of Nothing reveals his interest in sound qualities that most people would not be aware of, aural sensations that are ubiquitous but not regarded as attractive or worthy of attention. These barely audible, vague ‘grey’ noises, often akin to old records left running on turntables after the music has ceased, seem to be variations on rubbing, crumpling, hissing and buzzing - with a low pulse also coming out of the walls. While these sonic textures to some extent alter in their ‘softness’ or ‘sharpness’, the whole experience is not memorable unless they are perhaps one’s specialist interest. Maybe such an audience exists and will seek them out, but there were few indications when I visited.

In Te Tuhi’s darkened largest gallery is a work by the Danish artist Ann Lislegaard, a lengthy sound collage that uses sections of soundtracks from various European directors to make up a spread out, psychological landscape. The sources include Besson (The Fifth Element), Tarkovsky (Solaris and Stalker), Godard (Alphaville) and Truffaut (Fahrenheit 451).

Science Fiction 3114 makes up an ominously brooding soundtrack punctuated by various water noises, bursts of dialogue in assorted European languages, and scraping industrial sounds. The six-speaker sound system is superbly crisp and delicate but you have to lie or sit down on the carpeted floor and relax to investigate Lislegaard’s work properly. The whole thing is very low key and slow moving, but you get an intriguing sense of aural distance and panoramicl separation.

On a far wall is a tall screen behind which is an installed white neon sign saying ‘Science Fiction’. Its light creeps around the edges of the rectangular obstacle to cast a forbidding glow across the very large room that assists the activation of the listener’s aural imagination.

One major problem with this show is the lack of user friendly facilities for the visitor: no chairs in the lengthy aural works (though you are meant to walk around to explore shifts in spatial location) and a conspicuous lack of wall information. There is no explanation of the individual works which happen to be, for most people, pretty difficult. Labels should be as an option for those who want them - some don’t - although there is a table of catalogues and photocopies on the individual contributors. Not the same thing.

There are not even lists of materials that could educate or encourage an inquisitive audience. In a time when most dealer galleries work hard preparing contextual material for visitors who might buy something, surely a public gallery funded by rate-payers needs to woo the various communities who happen to call by for other purposes. So they stick around and enjoy it, and not leave perplexed or bitter. This is done by making the art less scary, not by compromising the actual exhibits, but by presenting easily understood information directly. That way audience numbers for the ‘difficult’ projects like those of Francis and Lislegaard can grow.