The Battle of the Bands 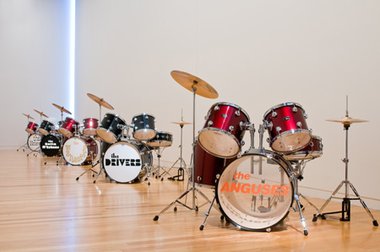 It's a measure of the impact of this transformation that the ideas of quotation, acid dry humour and double coding had become so well established by the time of my entry into New Zealand that it was seemingly easy to forget how recent and culturally radical this work actually was. Maybe this was in part because Postmodernism with a big P had lost something of its irascible shine by then as the appeal of new ideas such as the so-called ‘everyday' led to small gesture art beginning to chip away at what might be described as bigger picture simulation and appropriationist strategies.

I missed the 1990s in New Zealand. By the time I arrived in late 2000 the early flush of postmodernism had already spun out in a wide variety of directions. The big-ticket ideas of pastiche, appropriation and bi-cultural identity politics that had depth-charged New Zealand art through the last decade of the twentieth century were firmly bedded-in by the start of this decade - even if the broader implications of their impact were still being processed. Yet while aware of the significance of the work of Julian Dashper, Michael Parekowhai and numerous others in dragging New Zealand art in a different (less parochial) direction, I had clearly missed the shifting of tectonic plates that their work instigated.

It’s a measure of the impact of this transformation that the ideas of quotation, acid dry humour and double coding had become so well established by the time of my entry into New Zealand that it was seemingly easy to forget how recent and culturally radical this work actually was. Maybe this was in part because Postmodernism with a big P had lost something of its irascible shine by then, as the appeal of new ideas such as the so-called ‘everyday’ led to small gesture art beginning to chip away at what might be described as bigger picture simulation and appropriationist strategies. Such is the speed of obsolescence in contemporary art that we can so easily overlook or, more to the point quickly forget, zeitgeist moments of significant cultural change in the desire to chase the cult of this year’s model.

The broader point being labored here in this potted and highly reductive rehearsing of recent NZ art history is that there is real value in looking back at moments of recent history even with the benefit of little more than a decade. Play On curated by Tina Barton revisits four key game-changing works of the 90s by Terry Urbahn, Michael Parekowhai, Julian Dashper and the Australasian collective known as Slave Pianos - with the addition of a newly commissioned work by Ava Seymour. Her aim on the one hand is to examine the work of a number of artists working in the 90s for whom music was a metaphor for thinking about art. Yet perhaps more than this, Barton is attempting to drill into a specific moment in time with a view to re-evaluating what these works can tell us about the decade previous to this one.

On one level, the answer is they tell us a lot about how artists were beholden to the allure of music in its many forms as a vehicle to rethink and re-make New Zealand art at this time. There is also a real confidence and dexterity to the work in drawing together an assortment of high, low and vernacular languages, a confidence that is largely not self-conscious in synthesising the local with the international. Yet where this suite of work in the 1990s seemed emblematic of a broader sea change - maybe not a movement per se but a shared attitude - as individual works in 2010 they each say very different things.

Slave Pianos was a great work in 1998 and seems even better twelve years later. Conceived by Michael Stevenson and Danius Kesminas as a riposte to Australian artist Peter Tyndall’s Slave Guitar series, the work walks a perilously fine line between homage and blistering satire. While it has Stevenson’s absolute rigor and attention to detail, it is set alight by Melbourne artist Kesminas’ genius for playing with the dangerous edges of art and crucially jemmying them for all they are worth with his screwdriver.

At the time they conceived of this work, Stevenson and Kesminas, an odd couple if ever there was one, took a particular interest in the art /music phenomenon of the 90s. Both questioned the almost uncritical manner in which any artist picking up an instrument at this time was deemed to be making work of ‘artistic significance’. Slave Pianos is then a work in large part about the role and value of technical dexterity in the making of so-called art music, a dexterity that Kesminas and collaborators Rohan Drape and Neil Kelly know a lot about.

With its automated piano and beautifully fabricated retro sheet music of compositions by an array of artists from John Nixon to Daniel Malone, Slave Pianos is on the one hand little more than an archive of amateur musical talent dressed up to look and sound artistically important. Yet the profundity of the work lies in the scope of the archive itself and the breadth of national and international artists who have been treated to the Slave Pianos makeover of having their work scored, recorded and then produced as professional looking sheet music. The archive is so extensive and exhaustive and the quality of music increasingly varied, Slave Pianos cannot be dismissed as the work of a dissatisfied coterie of artists operating as vindictive art ombudsmen. But the venom is still definitely layered amid the heavily bourgeois aesthetic of popular classical music.

Michael Parekowhai’s Ten Guitars also holds up well as a marker of its time. This is partly a result of changes to the work over subsequent years and the markedly different histories of each guitar as they have gone into different public and private collections. A couple of the guitars look as if they have had some serious use - one is missing a strap and others have lost that brand new shine. Lined up in a long row in a highly formal arrangement the different condition of the guitars is a lovely embellishment to the original work and tempers Barton’s crisp arrangement. Where Ten Guitars was initially concerned with the beauty of Maori hand crafted guitar customization juxtaposed against the classic American semi-acoustic instrument, the re-assembled work eleven years later is increasingly about the process of wear and tear, with the museum owned guitars looking like they were bought yesterday and a number of the privately owned guitars conversely being very well ‘worked in’.

This process of transformation is in contra-distinction to Julian Dashper’s The Big Bang Theory where his five drum kits look as if they could be on the floor of the local Rockshop. Lined up in a serial formation like Ten Guitars, The Big Bang Theory is very much a display-only work that speaks more of the aesthetics of popular music than its actual making. I am unconvinced however that the work has stood the small test of time and it feels already like a historical curiosity in ways that the aforementioned works do not. The act of setting up a drum kit in New Plymouth and putting the name The Drivers on the kick drum speaks volumes about provincialism and the identification of certain towns and cities with iconic figures such as Don Driver. The point is well made but it appears more interesting and radical as a site-specific intervention into the galleries of those cities than as a rather fancy aestheticised installation. Seen as a whole, out of context and heavily embellished with brand new kits (the originals were borrowed and not identical), the work seems too bloated and one dimensional in its meaning. What was clearly a crucially important statement in 1992 about provincialism now looks, dare I say, provincial.

Terry Urbahn knows a lot about the provinces and draws on New Plymouth’s subcultural charms for his work The Karaokes. Operating as an executive artist, Urbahn invited a number of artists to contribute to his heavily artified karaoke machine. Set up in the gallery with all the karaoke accoutrements of monitors and flashing lights, the audience are invited to sing along to such gems as Ronnie Van Hout’s severely disheveled Elvis alter ego or Violet Faigan’s spooky version of First Cut is the Deepest. While the technology is hilariously dated (laser-disc players?) the work still speaks to a range of salient issues about our simultaneous fascination/repulsion with the vacuous end of pop music and the heightened role of the audience in shaping/misshaping the works meaning. The work still feels coarse and irritating which is how it needs to be to cut through its 90s inspired context.

While not all of the work in Play On seems to shine as well as it did a decade ago, this is an important show, one that is very well conceived and beautifully spaced. The idea of bringing in Ava Seymour to comment on this period seems an unnecessary distraction to the historical purpose of the show and her work 11 Bars of Oboe is highly elliptical in its references to John Cale and La Monte Young. Having said this there needs to be more of these types of shows that grapple with recent (but not too recent) practice with a view to reconsidering and re-evaluating the contexts that underpinned the formation of important work.

While Barton in the catalogue attempts to make sense of why artists in the 90s were so focused on music her suggestion that it (music) functions to partially subsume the isolation and individuality that comes with being an artist seems at best partial. To my mind, it’s more that popular music is an international language of style and credibility that has had a far wider appeal than art, and many artists have had to sublimate somehow a faint yearning that they have chosen as a career the wrong cultural discipline.

I look forward to David Cross's explanation for what Terry's work has to do with Taranaki. In the interests of ...

Being an 'auslander' I've nothing useful to say about the article's content. However, about Cross' prose - lapidary. He's a ...

David - what the hell has The Karaokes got to do with New Plymouth?

I thought the contextualisation of NZ in the 90s from a distance here was really valuable and well expressed. Its too easy to forget these things and get caught up in the cliche that the 90s was all about struggling with Post-Modern fragmentation rather than some rather important big shifts in how we look at things in NZ.

The comment on the Dashper was nice. Actually, it felt one-dimensional when it was first shown at Artspace, particularly up against the real hungry bashing around of biculturalism that was going on at the time (prime exhibit: M.Parekowhai's The Indefinite Article). Yet Dasper's deadpan one-note drumskins and frames always nicely set up against the volume of hot air and talk around other things - bringing us back down to earth.

David - what the hell has The Karaokes got to do with New Plymouth?

Being an 'auslander' I've nothing useful to say about the article's content.

However, about Cross' prose - lapidary.

I look forward to David Cross's explanation for what Terry's work has to do with Taranaki.

In the interests of spirited discussion of course.