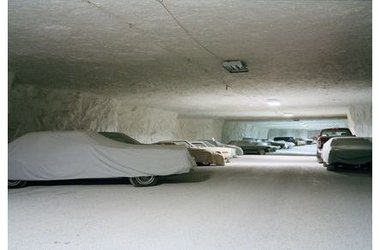 The distinctive design by Karina McLeod has on the cover, part of the title inverted, as are also the titles of the two essays. Though it looks at first to be an irritating gimmick, this unusual feature links closely to the ideas in the writing - the notion of mirrored and parallel forms of capitalist expansionism: above and below the earth's surface. Hence the ‘expanding' of the title.

Designed to accompany the recent exhibition in Dunedin this book presents a range of extraordinary coloured and b/w photographs by Wayne Barrar, taken in a large number of underground locations around the world. These include New Zealand hydro-electricity stations, Australian and American mining sites (ranging from opals to salt), American commerce facilitation, archive/storage amenities and toxic waste burials, and military tunnels dug by New Zealand miners for our soldiers in France during the Great War. As Barrar’s astonishingly varied images show, many of the mining sites have now been refitted for other purposes, such as bedrooms, libraries, paintball fields, and conference centres.

Not only is this carefully sequenced anthology of images impressive for the sheer variety of excavated spaces Barrar has documented - isolated ‘un-natural’ places most of us will never get the chance (or be allowed) to visit - but it demonstrates the wide range of image making he has been involved with; his explorative use of a camera. Some show no mine employees, other workers or family members anywhere within their eerily still, drilled or hacked out (but often now domestic) locations. Others use time-lapse photography or multiple exposures to present blurred ghosts of movement or long lines where helmet-lamps or coloured overalls have trailed. Others still show vast wide cavernous chambers where light re-enters from a distant entrance, while a few have Barrar projecting slides of faces or words up close onto roughly-hewn walls, or presenting images of scratched graffiti or painted names many decades old. Some of the locations he shows us are so interesting you really want to go and explore them yourself, extremely unusual places like Coober Pedy in Australia or Brady’s Bend in Pennsylvania.

The two essays by David Pike and Aaron Kreisler work well together, particularly as an extension of the distinctive design by Karina McLeod which has on the cover part of the title inverted, as are treated the titles of the two essays. Though it looks at first to be an irritating gimmick, this unusual visual feature links closely to the ideas in the writing - the notion of mirrored and parallel forms of capitalist expansionism: above and below the earth’s surface. Hence the ‘expanding’ of the title.

Perhaps this is a bit forced in terms of ratio between above and below, and everybody seems obsessed with capitalism these days, but nevertheless it is an intriguing notion, especially here in the way Barrar has zeroed in on certain locations that support this thesis.

Looking at the essays, Pike’s richly detailed discussion begins by drawing in early ‘subterranean’ literature from writers as varied as Homer or Dante, or unexpected visual material like images by Gustave Dore, Thomas Wallace Knox or later Henry Moore and Chris Marker to give a wonderful contextual background to Barrar’s densely researched investigations. He draws out Barrar’s interest in the commodification of the ‘interface between the human and the industrial’ as a form of ‘permanent fortification’ (all access carefully monitored) under the earth in the second half of the twentieth century, mentioning paradoxes such as the utopianism within the utilitarian architecture with its impeccably stable climate, dryness and absolute security. It is a very thorough overview of the underground theme and how Barrar fits in.

Kreisler similarly writes about the contestation of land per se - on a global level - underground land once perhaps considered waste but now highly marketable. He mixes in with this extremely current subject-matter fascinatingly apt, but unexpected, quotations from Lewis Carroll and Roald Dahl (and more obvious ones, such as from ecological theorist the late Geoff Park) showing us Barrar’s deep understanding of the photographed landscape tradition - and how even with images of underground sitting rooms and offices he is extending that. With a photography practice of almost three decades, Barrar is preoccupied with the consequences of human encroachment over - and under - the planet’s land surfaces, but Kreisler is more explicit than Pike in drawing out the connections with the processes of capitalist expansion, so that even once abandoned wasteland underground can be dressed up or reshaped and turned into profit.