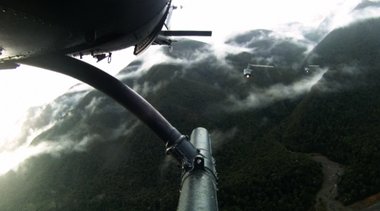 The challenge of Monteith's work is to create a gripping immediacy that resonates beyond a gimmicky roller coaster thrill, but which doesn't over intellectualise either and let the energy unravel or pace decrease. Her best projects achieve a balance that mixes the memorable with new forms of Futurist-tinged, haunting beauty; profound bodily experiences of which one can never tire.

This Alex Monteith survey of nine works is the second exhibition organised by Rhana Devenport where almost all of the gallery is devoted to one artist. The first was Peter Robinson’s Snow Ball Blind Time. That unique installation was astounding because of the way Robinson’s variously sized polystyrene chains dissolved the spatial properties and edges of the architecture. In comparison, with Monteith the building retains its form and visually her multi-channel installations (plural note, not singular) are wisely kept discrete, though the cacophonous sound swirls and mingles around you - making most of the show very physical and aurally immersive.

There seem to be three main varieties of project in Monteith’s current corpus. The first is the vertigo-inducing, knee-weakening works where a mixture of speed on an accelerating machine, changing angles of the titled ground and overwhelming sound wrench your body to and fro as you are tossed around with the manoeuvring rider or pilot. It is as if you are in the work, not gazing upon it. Several times with these I felt the balancing mechanisms of my inner ear going awry and thought I was going to topple over in the gallery.

Then there are the comparatively ‘distant’ works where a more bodily passive spectator watches the image from afar as if they are observing a moving drawing with kinetic linear properties. The best of these have piercing staccato sound and wonderful humour (such as the erratically appearing bikes on the steep Ahipara sand dunes in Ascents and Descents in Real Time). The weakest, such as the Red Session surfing projects, don’t.

With the Red Sessions the waves are aurally soft, and because you can’t feel the offshore breeze or smell the ozone you remain bodily detached from the image. (There are some beautiful highlights where a surfer catches a curling wave and dips and climbs his [or her] way right across the long series of screens - but those moments are rare.) It is not because the movement is slow that the work fails: it’s just that as Duke Ellington put it, ‘it don’t mean a thing if it ain’t got that swing.’ Not even a four screen panorama or clever use of lifting colour in the red rash-vests can do it.

The third variety are the political protest works featuring the Tino Rangitiratanga flag, and the involvement of the Local Time artist collective (of which Monteith is a member) supporting the Maori sovereignty group Te Ata Tino Toa. The Parihaka to Cape Egmont... work is dull because there is no visual excitement through the driving tactics of the two red flag-carrying Land Rovers - there is nothing there to hold your interest - and with Monteith you are used to being spoilt. The work is a plodder.

Its sister project, a documentation of the 2008 Waitangi Day Auckland Harbour Bridge protest, criticising Transit New Zealand’s decision not to fly the Tino Rangitiratanga flag, works because of the bright summer light and the occasional participation of the flapping flag in one of the two cameras. The flickering banner introduces drama, was probably not planned to do so, and very briefly solarises and freezes the digital images of the motorcade on the bridge. It saves the work through its spontaneous, almost ‘Chris Markerish’ intervention.

The real treats of this show are two contrasting installations featuring five acrobatic planes at Ohakea in the Manawatu Plains, and three Iroquois helicopters at Dip Flat in the Wairau Valley. Not only is the choreographed movement through the sky hugely different in each but also the contrasting light and North and South Island landscapes is immensely enjoyable. The helicopter project, with its pilots training for Search and Rescue operations, has a brooding dark ‘mystical’ landscape that pairs Monteith with the painterly tradition of van der Velden - the muted ochre colours are sensational. With the other speedier aeronautics work, the five cameras aimed over the tails of the looping and rolling Red Checkers aircraft reveal a five panelled moving drawing with streaming vapour trails - accompanied by changing light radiating through early morning clouds.

Monteith’s talent is not simply that of being a great visceral film maker who sets up processes that create images you can quickly respond to. She knows how to juxtapose her screens as elements in coordinated installations, exploiting the edges and planar angles of her projections to bodily include you. Her methods - outside the social content that is tightly bound to them - are very aware of art history and how (and what) representations of landscape communicate, but she also knows instinctively how to advance beyond the analytical to somehow wrap the aural and visual imagery tightly around her audience.

The challenge of her work is to create a gripping immediacy that resonates beyond a gimmicky roller coaster thrill, but which doesn’t over intellectualise either and let the energy unravel or pace decrease. Her best projects achieve a balance that mixes the memorable with new forms of Futurist-tinged, haunting beauty; profound bodily experiences of which one can never tire.

I thinks she might mean 996 cctv...a great piece on many levels! See: http://www.youtube.com/watch?v=2uDdCAPMjqs

Sounds interesting Melinda. Is that an early work? Reminds me of the method used by Ronnie van Hout for a ...

Scale is often an asset with video. It is not easy to command resources such as the large amount of ...

Scale is often an asset with video. It is not easy to command resources such as the large amount of necessary real-estate and access to high quality multi projectors for most artists, so she is lucky on this count. Her most intriguing and creative work for me was the close up of a toy car wheel projected large in conjunction with a straight video of cars played at a number of venues.

Sounds interesting Melinda. Is that an early work? Reminds me of the method used by Ronnie van Hout for a video of Hitler touring Auckland. He had a saluting model in a stationary toy car with a 'moving' back projection behind it. It's really a standard pre-digital Hollywood movie technique. Used by Hitchcock and others.

I thinks she might mean 996 cctv...a great piece on many levels!
See: http://www.youtube.com/watch?v=2uDdCAPMjqs