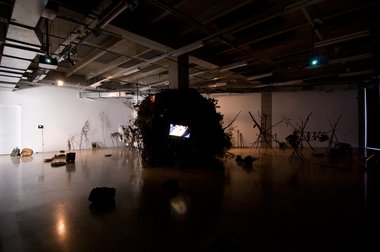 Nakajima's Tao Installation, 2011, with its display of smashed and pierced computor tubes, e-waste ‘punished' during the opening night performance, seems two-faced in view of St Paul St's conventional emailed promotion of the exhibition. It might have been an interesting (pointed but futile) gesture to use alternatives.

This exhibition of work by two visiting Japanese performance and video artists has been coordinated with their public workshops and performances. Ko Nakajima (b.1941) is a seminal pioneer in the development of Japanese video and Kentaro Taki (b.1973) a much younger investigator of communications media and its cultural consequences. One has an interest in nature and the landscape, the other a preoccupation with sign and symbol and urban imagery.

You can see their distinctive individual approaches in the installations within the two St Paul Galleries, even though they share both spaces and invite confusion. Many of Nakajima’s videos incorporate geometric computer graphics (something he helped popularise) which hover in space and fly around filmed objects. Taki’s on the other hand often play off oddly witty juxtapositions, such as filmed cars drawing out pictograph shapes on the landscape, or living human body parts twisting and turning in stacked up boxes - to be then replaced by living animals or plants.

Taki’s most successful work in my view is a two channel projection onto an assortment of broken computer chassis, broken monitors, scanners and a fan, stuff projecting out from two walls in a corner. Bild: Mull #7 - he para 2011 has fifteen surfaces onto which flickering coloured moving images rapidly come and go, and the effect is mesmerising. It is semi-graspable. You are not sure what you are looking at, and projections change about quickly, keeping the walls seethingly vibrant and alive.

Although Nakajima has lots of dried trees tied around columns transforming one space, and branches in another framing an assortment of drawings and lithographs, his best work is not connected to landscape at all, but an unadorned video. It documents key events in his life from the seventies such as the death and cremation of his mother, Motuko. At the same time on an adjacent screen, we see the birth and growth of his daughter Tamaji.

I liked the lo-tech simplicity of this unassuming but intense black and white video, that despite it looking dated, is much preferable to his large tree-loaded installation in Gallery One. This with its display of smashed and pierced computor tubes, e-waste ‘punished’ during the opening night performance, seems two-faced in view of St Paul St’s conventional emailed promotion of the exhibition. It might have been an interesting (pointed but futile) gesture to use alternatives.

The My Life 1976-86 video, with its emotional immediacy and (I think) more apparent honesty, may be an influence on the very famous Nantes Triptych (1992) by Bill Viola, another video featuring simultaneous births and deaths. It and Taki’s Bild: Mull #7 are the highlights of the exhibition.

Hammering spikes into monitor tubes is a theatrical action of dramatic emotional power - surely implying condemnation. Not celebration. I ...

hi John, further to; first up, we're talking at cross purposes as to what constitutes your opening paragraph. The review ...

Thanks for opening up a conversation here, Phil. Sorry if my opening para was oblique (not sure which part you ...

The opening introductory comment of your review John is somewhat esoteric and bears further discussion. You charge Ko's installation as being two faced in light of the 'conventional' emailed promotion. You further advise that it might have been an interesting gesture to use alternatives. Who? Ko Nakajima or the St Paul St copy writer? It's clear you don't like the work and that's fine but to cloud it with a charge relating to emailed promotion of the exhibition is not only confusing for the general reader, but a bit of a red herring. I have checked with others who have read your opening comments who are as equally mystified as I am.
Maybe you'd like to elaborate further and more explicitly.
thanks. PD

Thanks for opening up a conversation here, Phil. Sorry if my opening para was oblique (not sure which part you mean?), but my 'two-faced' comment was in my second to last paragraph. I was referring to the critique of computer-use by both artists by incorporating E-waste - in particular Ko's performance /installation with the smashing up of computer screens with spikes, which I saw on opening night. My point was if they really feel so strongly about electronic cyber machinery that they wish to condemn it in their practices, why promote the show with email. Artists after all can control all aspects of their exhibition publicity if they put a mind to it.

Perhaps I'm splitting hairs. After all there are many things in our lives that we are ambivalent about but which we still uneasily carry on with. Nevertheless, public art that claims to endorse a certain anti-technological position but which in fact uses that same method for publicity, deserves a comment pointing out the lack of consistency. Maybe I've misunderstood? I'd be very happy for readers to tell me so.

Getting back to your point about my introductory paragraph, Phil, did I botch it with my distinctions between the two artists? Were my descriptions inaccurate? My writing seems clear to me but others may obviously disagree.

hi John, further to; first up, we're talking at cross purposes as to what constitutes your opening paragraph. The review begins, as you point out, with an extract from your second to last paragraph. Being the 'opener' I took it as the first. We're on level ground now I trust.

The opening ritual around Ko's installation involved the destruction, with funeral rites, of ten obsolete monitor tubes, returning them in a sense to their material source. The work, titled Tao installation referenced the integration of the five principle taoist elements, and the fact that obsolete technology, like our bodies is temporal, dispensable and ultimately cycles back to the earth replaced by a new generation be it electronics or flesh and bone.
They certainly don't condemn the technology, they celebrate it in every way, from its birth to its death.
Hey, brighten up, we all face the same future.
Nothing too faced about that!

I realise the complexity of the movitation behind the work, and maybe I am being reductive, or over reactive. However to me there is an issue.....