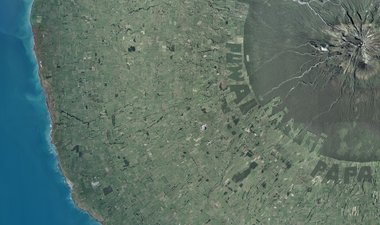 The two types of image really hit home in abrupt juxtaposition: one intricate, healthy and spatially removed; the other crumbly, sick and in close proximity. One beguiling and communicative, the other repulsive and silent. The difference is shocking. That distinction is really the show's point.

In the front (streetside) Gallery One of MIC - and in the adjacent thickwalled ‘vault’ by the door - two Sydney artists are currently presenting four rectangular video projections on the floor, scattered amongst three lightboxes.

Josephine Starrs and Leon Cmielewski recently did a SCANZ 2011 residency in New Plymouth at Eco Sapiens at Owae marae. Their digitally modified versions of aerial landscapes downloaded from Google Earth - flat on the floor - are permeated by a soft cool grey/green light, but the nearby glowing oblongs (eight inches high) of stationary, dried Australian river beds or salt encrusted lakes, exude hot piercing colours of spicy red, pitted streaky orange and sienna ginger. The moods generated by the two media are very different.

Accompanied by a delicately nuanced soundtrack, the videos slowly track in different directions: some like the one of Taranaki, spiral around the edges of its cone; others move from end to end or top to bottom; others drift diagonally.

Each video has an animated eco-text that grows out of the landscape forms; the emerging lettered message seeming to rise from the core of the planet. Some phrases, like ‘days like these’, or ‘and the river was dust’ are expressed in cursive script embedded in the undulating coils of meandering rivers. Others like ‘Pūwai Rāngi-Papa’ (Waters of the Radiant Sun and Earth Mother) occur in unravelling strips of native forest, or - as in ‘A Living Body’ - through morphing cliff forms. The words come from sources as diverse as John Lennon, Judith Wright, Tom Trevorrow (a Ngarrindjeri elder) and Dr.Te Huirangi Waikerepuru (Taranaki elder).

Though these images are motivated by deserved alarm at our planet’s deteriorating state of climate change, the videos can be enjoyed free of the work’s admonitory intent. Slow moving bird’s-eye pans across different varieties of countryside are beautiful in themselves, the sort of pleasure you have from looking out of a plane window. This time it is much higher up, being filmed from satellites.

Starrs’ and Cmielewski’s pixellated views, with or without their warning texts, are mesmerising. Some have wobbly contours as if the land is filmed through a layer of water and refracted. Others have a feathery, slightly spiny acuity, with the ridges almost seeming 3D. These qualities are a vivid contrast to the grainy coarseness of the garish salty-sandy lightboxes, which seem like close ups they are so intense. In fact as glowing transparent photographs they are lifesize.

The two types of image really hit home in abrupt juxtaposition: one intricate, healthy and spatially removed; the other crumbly, sick and in close proximity. One beguiling and communicative, the other repulsive and silent. The difference is shocking. That distinction is really the show’s point; the lightboxes are unabashedly repugnant, their purpose - like the wriggling texts - is didactic.

The cleverness of this show and its layout is obvious, but I would have liked to have seen more moving projections without the lightboxes. I enjoy the inventiveness of the animation, its beauty, and the fact that the texts aren’t long winded. The artists don’t milk the writing as a gimmick so it becomes tedious. The work is seriously earnest but also restrained.