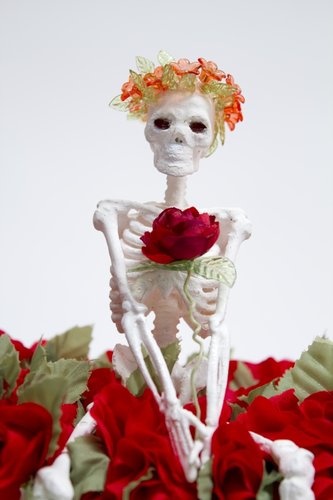 Perhaps the most macabre of all the works were the small sculptural creations of Niki Hastings-McFall. Skulls and miniature skeletons abound. With a mix of ceramic, plastic, synthetic, fabric, bone and shell, the plot of dark romance is played out in blatant kitsch fashion, recalling the playful penchant of a Judy Darragh.

New Romantics at The Wel Energy Trust Academy, Waikato University, curated by Karl Chitham, appears to be the old romantics with the volume turned up a tad, loud enough to make sure no one mistakes it for the cult of sensibility. There’s enough skulls, both painted and sculptured in this show to start your own ‘killing fields’ collection. Here is the artist with ego displayed lavishly, even narcissistically in good postmodern fashion, complete with lashings of irony and self mockery laid on liberally with a handy kitchen spatula.

Yes, we all need satire to sharpen our pencils, but these works, entertaining as they were, had me reaching nervously for the control button. Their flat, hard-edged delineation was in direct contrast to the works on paper by Emma Smith. Her collaged pieces worked the expressionist trope, all splash and dash, complete with the ubiquitous skull engorged in thick colourful hues. The collaged effect (abstract painterly elements cut out from separate sheets of paper and layered on top of each other) recall a similar trick employed by Pat Hanly who reworked old material into new paintings in the same manner. With titles like, You Pulled Over to Write it Down, the artist is obviously enjoying unalloyed pluralist pleasure with the genre.

In quieter mood were the delicate watercolour washes of Zina Swanson (out of the stables of Robert Heald Gallery) opting for a vegetative theme - tendrils and branches morphing into limb-like structures with the disturbing presence of sutures holding their various segments together. All very gothic and slightly ambiguous on a minor scale. No skulls here, only dismemberment and amputation recalling Goya or more recently Jake and Dinos Chapman’s Great Deeds Against the Dead, 1994.

In contrast, Kathryn Tsui’s photographic prints based on kaleidoscopic images came as a relief from all the aforementioned jocular morbidity, although the multifarious diamond shaped sweetness and light of these two-dollar shop toy projections did betray a certain sinister element when looked at long enough.

Perhaps the most macabre of all the works were the small sculptural creations of Niki Hastings-McFall. Skulls and miniature skeletons abound. With a mix of ceramic, plastic, synthetic, fabric, bone and shell, the plot of dark romance is played out in blatant kitsch fashion, recalling the playful penchant of a Judy Darragh. Just in case one missed the point, various quotes from literary luminaries, esp. Virginia Woolf (The Waves) were provided, acting as prompts on the subject of transience. All very amusing, but is there room on this tiny Island for more than one Judy Darragh?

But the work that did it most for this reviewer was the dark sculptural forms of Graham Fletcher. His Upritchard-like concoctions were a delight. Primitivism (mud-men) meets the modern world, were funny and yet somehow strangely moving. These black tar and hair encrusted creations, generically figurative, brought the old and new together in surprising and engaging ways. Even the inclusion of worn leather golf club covers draped over one of the clunky figures only added to its sense of presence and power. Contradiction and parody simply enhanced the mystery.

Trash made treasure, existentially vamped, is what the best of these works in the show were hoping to provide. If Chitham was looking for a “fantastical reality” a “rupturing of the mundane”, as he describes it in his catalogue essay, then it was best found here in the sculptural mutants of Graham Fletcher.