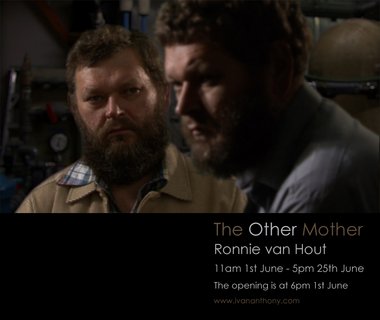 Personally I think this is the best film van Hout has made so far, with unexpected dramatic tension and more convincing acting and dialogue. It's very entertaining visually as the different van Hout selves convulse energetically, glare murderously at each other, and shrink inside their clothes.

Ronnie van Hout
The Other Mother

There were two exhibitions at Ivan Anthony, one each side of the landing at the top of the stairs.

Ronnie van Hout’s presentation focussed on his new video (Your Other Mother) based on the science fiction film and John Wood Campbell’s novella, ‘The Thing’, but also included some new versions of some older work (based on an Antarctica residency) seen a couple of years ago in Christchurch in Who Goes There? - a survey show assembled by Justin Paton.

The film features six characters working in Antarctica, all with identical faces and all played by van Hout. Because the alien can morph into any human form it desires, the leading character was desperately trying to identify the monster from within a group of its identical clones, taking samples of blood and poking with a hot wire - something apparently excruciating to the visitor.

Personally I think this is the best film van Hout has made so far, far less hammy than say, the drunken chimp vids, with unexpected dramatic tension and more convincing acting and dialogue. There were lots of moving bodies - pogoing, writhing and twitching - accompanied by rapidly distended, bulbously lopsided physiognomies. It’s very entertaining visually as the different van Hout selves (this is one interpretation) convulse energetically, glare murderously at each other, and shrink inside their clothes.

Most of the other van Hout works were remakes of earlier works from this theme: the alien sitting in his blue fur-lined parka in an isolated observation cell, or much smaller sculptures on vertical timber beams of a reprised Bananaman, Hammerman, Dogman and two torsoed figure. The wood was white but the sculptures were sprayed creamy off-white. Alluding to more than simply the southern frozen continent there was a sense of the yellow coming from urination in the snow, as if van Hout was symbolically reprudiating his earlier work and the artist who made it - now in this interpretation scornfully ‘peed on’.

In the other half of the Ivan Anthony gallery Saskia Leek continued her exploration of the Still Life genre and vaguely cubist, abstracted landscapes - as she had been doing in earlier shows. There were seven fruit works and three bush with houses scenes. Most of these pastel paintings were inspired by Cezanne, particularly the groups of light raked trees or compositions of apples on tables or hanging bunches of grapes.

A few were too bland and chromatically uniform with their faceted shapes to be memorable. However the best of the Still Lifes played hot and cold colours (or greys) against each other to gently stabilise the space, the resulting contrast of colour temperature and tone providing compositional muscle and stridency. The landscaped forest clearings, alluding to McCahon and Louise Henderson, were also finely tuned with the occasional corner removed to accentuate dominant trapezoid and triangular shapes.

Anthony’s gallery space, with its office desk and chair, and views overlooking Karagahape Road, provided a domestic setting that took a little of the chill out of these paintings, being more apt than the other icier suite of rooms that van Hout was using, and which Leek herself used prior to the Walters Prize. The few bush scenes were particularly evocative; the show’s highlights.