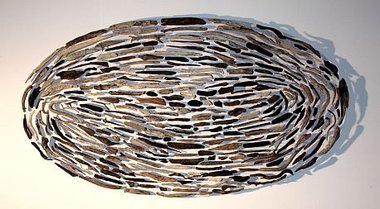 There is also a series of textless oval works using light materials (like pumice or driftwood) fixed to a back horizontal panel with steel pins so they hover. These I think are the pick of the bunch, not so much for formal reasons or even lack of complex semantic layering, but rather because of their use of suspension as metaphor - an abeyance or holding back of meaning.

There have been ubiquitous survey exhibitions - both here and abroad - about the relationship between image and written text in art, most generating various fascinating publications, but not many looking at the use of textual substitutes in the form of codes such as Braille or Morse. I’m talking about sign systems in artworks that have written language translated into other ciphering systems - not outwardly displaying words. For example in this country Peter Robinson created lambda prints for the 2001 Venice Biennale using binary (0/1) codes, while Anton Parsons has made many related sculptures incorporating Braille, small projecting rods (positioned on different planes), and numbers.

Peter Panyoczki’s exhibition of fifteen works at Bath St includes some inkjet still life photographs, and many relief sculptures attached to the wall. Some of these incorporate photographs on square lightboxes, and over their imaged surface, Braille texts that comment on properties of the material world, or the possible hidden mystical meaning behind it. The texts are translations from well known writers like Pessoa, Berkeley, Ouspensky and Burkhardt.

Translations of each Braille lightbox (the tips of the projecting acrylic rods glow like floating white dots) are provided at the front desk, but their connections with the underlying photographs vary in approach. For example, Jasmine Connects II with its images of white windmill-like flower petals, has a Fernando Pessoa text that says enjoy the sensuality of the world, for it is useless to search for an inner meaning. There is a reflexive pun gong on for it seems to refer to itself.

Perception II on the other hand has some overlapping vaselike tumblers lying on a floor with light spiling out from within them. The text from George Berkeley comments on the hidden and visible, undermining our assumptions about mental interiority and the activity of other minds. A third, Osmosis II, shows a red furrow or crease in a grainy patch of skin that looks like particles in suspension. An excerpt from P.D. Ouspensky suggests swirling forces and accelerating energies active within matter, as opposed to static solid masses.

Other works are overtly alchemical, relating to Julia Morison’s work in Christchurch in the mid-eighties which incorporated similar symbolic materials with photography. However Panyoczki’s substances, placed over single words in these square paintings, tend to be ironic or exploiting paradox. One painting with block letters in relief stating ‘Heaven’, is written in lead, implying descending weight. Another saying ‘Gold’, alluding to the rising sun and radiant spirit, has pale earth coating its lettering. A third, ‘Earth’ is covered in both earth and gold leaf, mixing the substances together.

There is also a series of textless oval works using light materials (like pumice or driftwood [that brings a touch of Richard Long]) fixed to a back horizontal panel with steel pins so they hover, and other rectangular works with sparkling sand glued to what look like mottled solarised patterns.

These last works I think are the pick of the bunch, not so much for formal reasons or even lack of complex semantic layering (ie.directness), but rather because of their use of suspension as metaphor - an abeyance or holding back of meaning. They, in the context of this show, become ciphers like the configurations of acrylic rods that make up the Braille, speaking vaguely of something beyond themselves but remaining inchoate. More than material but less than idea.