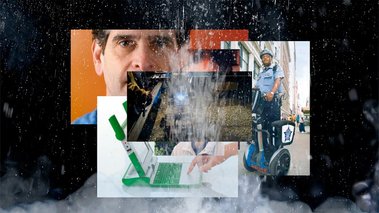 'Wonderful Turbines,' the ten minute video from Rowan McNaught is a provocative work looking at global issues and focusing on the assistance of third world countries - but oscillating between sympathy and sarcasm. Endorsing various eco-issues, but also at times derisive in its tone, the film seems either genuinely tizzy, or mischievously baiting. It's oddly schizoid.

Personal Best is an artist run space in K’ Rd that was established in February this year. Since March it has presented an energetic, varied programme, often enabling artists to show more experimental work than what they can usually display in a dealer gallery.

Brand New Value is its eleventh exhibition. Morag Dempsey has organised two Melbourne artists (Rowan McNaught and Sam Hancocks) to show with a local Aucklander (Daif King), the work focussing on the flow of information enabled by current technologies, and how (in theory anyway) that affects the value of cultural objects moving between material and immaterial (digital) space.

Sam Hancocks runs Visual Aids, an evolving online anthology of images and videos that looks at consumerism and the seductive sheen of global capitalism. (It is a wee bit like Jahjahsphinx.) Like a magazine it is astutely put together so you can read the connecting sequences in a specific order. However in Brand New Value Hancocks contributes a group of police riot shields made of curved Perspex so they are transparent and reflect the contents of the small room. He has installed fluorescent lighting at the bottom of the gallery wall so (I think) the tubes refer to the ambient light from computer monitors. Each shield looks like two screens stacked vertically. Subtle stuff.

Wonderful Turbines, the ten minute projected video from Rowan McNaught is a provocative work looking at global issues and focusing on the assistance of third world countries - but oscillating between sympathy and sarcasm. Endorsing various eco-issues, but also at times derisive in its tone, the film seems either genuinely tizzy, or mischievously baiting. It’s oddly schizoid, even though it is playful with sound, spoken word and image. Check it out here.

Local musician and artist Daif King presents four colourful digital prints, drawn on screen and transferred to Giclee. Cartoonish in mood, but oddly painterly and rough too, these simple compositions are perhaps too understated to hold your attention for long. However one of them, Log and Ice, is perfect. The out of focus background of lined up suns and clouds is an effective and satisfying contrast to the inert log sitting on the frozen puddle, which amusingly is like a person reclining on a flying carpet.

This is an interesting show to call in on because these artists are not well known here. However not much of it is memorable. As a group the artists don’t mix together particularly well. More from each, in solo presentations, might have made their strengths more apparent.