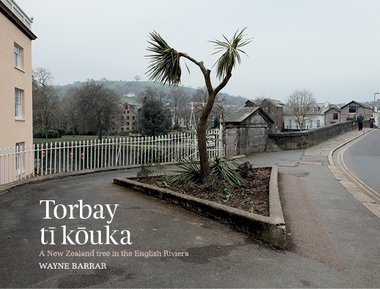 Not only is this book revelatory for New Zealand readers, but I imagine the Brits will be intrigued by Barrar's images of tī kōuka in ‘authentic' locations such as the Wairarapa.

This fascinating little soft covered book by Wayne Barrar focuses on the fact that for the last hundred or so years the residential gardeners of Devon and Cornwall have been cultivating and propagating a plant usually regarded in our part of the world as unique to Aotearoa only: the cordyline australis, tī kōuka, or cabbage tree - called that because Cook used it as a dietary substitute for cabbage for his sailors to help fight scurvy. Also called Torbay Palms or tree lilies, its first successfully cultivated seeds were collected by the botanist Charles Frazer in 1820 from the northern North Island and propagated in Edinburgh.

Of course the phenomenon of this plant’s spreading is only wildly surprising if you happen to believe that historic and cultural processes are pure, static and self-contained, and that national identities remain likewise. However anybody familiar with the origins of the English language and English cuisine for example, realises that these aspects of British culture always have been quick to embrace and absorb items from the margins of Empire, pulling them into the centre so they are recontextualised and Anglicised.

This aspect is part of Barrar’s humour when he documents cordyline on English sites such as next to a pole flying the Union Jack or besides a lightbox showing an image of John Bull. We assume he is being funny. But his thoughts as artist we can only guess at: his motivations might be sardonic or rueful, or perhaps even the opposite: magnanimous and enthusiastic about the ‘appropriation’ of a symbol of Aotearoa’s flora.

This project (touring exhibition and publication) comes not long after Barrar’s brilliant An Expanding Subterra with its mesmerising series of manmade underground landscapes. It is not as rivetting but it is capitalising on the surprise most New Zealanders will have in seeing images of ‘their’ iconic tree so ubiquitous in the south of England overlooking ‘Riviera’ beaches. To help us understand how this came to be, the Simpson brothers provide excellent essays: Philip the botanist (amongst other things he discusses the new English hybrids) and Peter the art and literature scholar (who reminds us that ‘the Empire strikes back’). And Barrar’s informative images (taken in Aotearoa and England) are gorgeous, rich in historical layering, and often funny or poignant.

A couple of crackers, and very obvious, are in Torguay, in a ‘crazy, tropical themed’ golf course. They feature concrete painted animals such as a tiger and gorilla. Here in our minds, Aotearoa blends with Albion and then Africa to conquer the globe. Not only is this book revelatory for New Zealand readers, but I imagine the Brits will be intrigued by Barrar’s images of tī kōuka in ‘authentic’ locations such as the Wairarapa. This is an impeccable publication that will probably attract a wider readership than Barrar’s recent (but perhaps more spectacular) subterranean work. It’s more homely with its (possible) espousal of gardening and hobbyist interests. Less science fiction.