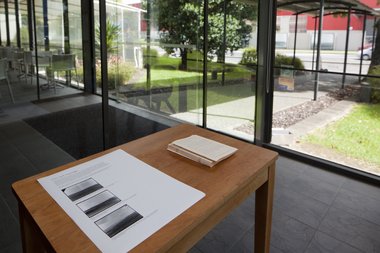 What is interesting is just how hard it is to confirm the site of the exposures. To me, looking at my road atlas, I'd pick the corner of Rakau Drive and Pakuranga Road as the site (a block to the west) because it is more of a rightangle at the intersection (as the photograph shows) and vectors directly to Panmure, but I'm not a local and know nothing of the immediate landscape.

As part of Te Tuhi’s ongoing Reeves Road billboard series, this project by Fiona Jack continues her well known interest in history and local communities. She, like other earlier billboard artists, presents three images - this time three enlarged photographs taken in 1910 and 1905 from a few blocks away when the Pakuranga region was almost entirely open countryside. However she also includes a small booklet that is part of the work (not a comment on or explanation of it) - 14 pages of conversation between herself, three artist friends who know the area, and an historian.

The images of the flat coastal marshlands and the sea were made by unknown photographers using glass plate images. She found them in the Sir George Grey Special Collection in the Auckland Libraries.

These enlarged images include various blemishes, gashes and striations from the original hundred-year-old plate but there is an amazing amount of detail too. The three shots are taken it seems from the same position but at different angles.

The one on the left is of a reclining suited gentleman in a hat languidly looking over some low rolling fields and part of the Tamaki River. We see a swamp and some farming sheds. Another photograph, in the middle, is looking down Pakuranga Road. It is a wide dirt track and there is a cart with draughthorse carrying two passengers approaching the photographer, accompanied by a cyclist. There are balls of horseshit on the road and a telephone line running along the side. The third image on the right is a view again looking down towards the river, with a nearby barbed wire fence and gorse hedges, cows in the field and Rangitoto in the distance.

These photographs are separate with no overlapping vistas, but ostensibly they appear to be taken at the same time at the same place. The first is facing southwest, the second (actually taken five years earlier than the other two) northwest, and the third due north. They happen to create a nicely balanced (though disjointed) panorama, all three images fitting beautifully into the block wall divisions on Reeves Road.

Jack’s small, nicely designed, free publication has the images separately at the back, preceded by the discussion in January with Nova Paul, Luke Willis Thompson, Pita Turei and Alan La Roche. Seeing the site of the camera position is the corner of Pakuranga Rd and William Roberts Road, a location that is very close indeed (two blocks), Jack’s chosen images must be of immense interest to locals. This booklet and the public images might bring to light some other photographs of these vistas, taken before or after these ones.

What is interesting is just how hard it is to confirm the site of the exposures. To me, looking at my road atlas, I’d pick the corner of Rakau Drive and Pakuranga Road as the site (a block to the west) because it is more of a rightangle at the intersection (as the photograph shows) and vectors directly to Panmure, but I’m not a local and know nothing of the immediate landscape. Historian Alan La Roche in the conversation is very candid about his uncertainty about aspects of this central image, while Jack herself is convinced the identification is correct. Looking for confirmable historical facts seems to be very similar to perceiving and interpreting artworks.

Much of the discussion is about the communities in the region who are not apparent in the images, iwi living there for the previous thousand years, and linked facets like the complex botanical and soil structures, the food supplies and transportation, the personalities, plus of course the impact of colonisation: its psychological and physical impact. For lovers of history (maybe art too) it can lead them to further research - a fascinating and informative document.

Another work by Jack that is currently very visible in Auckland’s inner city is a series of black and white portraits of the locked out Ports of Auckland waterside strikers, their faces pasted up amongst the concert and CD posters on construction site fences. However Jack hasn’t made a booklet for this work, she is assuming viewers read the papers and follow the dispute. She lets the viewer figure out the context of the visages for themselves.