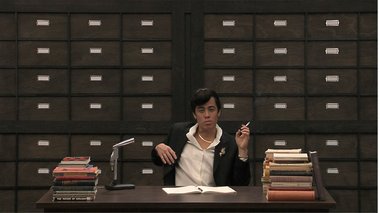 Geyer's ‘trial' script is set out in a series of connected arguments: accusations and replies bouncing backwards and forwards across the configuration of recorded personages. Arendt's subtle discussions undermine some of the seemingly irrefutable points of the prosecution and as such, accentuate the contradictions found in the nearby projects of Fast, Tribe, and Bartana. The show and its components have a life independent of its curator and artists.

In this suite of five international, text-driven, video installations - assembled by resident curator Mercedes Vicente - that use language and imagery to explore notions of culpability and personal (or governmental) responsibility, the sum of the parts is a lot more effective than the efficacy of the individual components. A couple of these northern hemisphere artists have shown in Auckland before, but with superior works (Omer Fast in Natasha Conland’s Mystic Truths at AAG, Kerry Tribe in Laura Preston’s Before and After Any Situation at ARTSPACE, both in 2007) yet it is exciting to be reintroduced to their practices in a new context, one that examines the fragility of memory, the constructed nature of art, and various ethically preoccupied narratives it can present.

To do this Vicente has been precise in her placement of individual works around the gallery, positioning them in the Govett-Brewster architecture so that they collectively interact to maximum benefit and heighten certain readings. At the hub of the wheel is Andrea Geyer‘s presentation of arguments from the 1961 trial of Nazi holocaust-transport mastermind, Adolf Eichmann on Level 5, the highest floor. She uses actor Wu Ingrid Tsang to play the accused, prosecutor, defence lawyer, judge, audience, and reporter - the latter using pithy sections from the postscript of Hannah Arendt’s famous essay about the trial (Eichmann in Jerusalem), and the rest coming from court transcripts.

Geyer’s ‘cast’ is cleverly arranged in a circle of inward-facing flat screens so that the script is set out in a series of connected arguments: accusations and replies bouncing backwards and forwards across the configuration of recorded personages. Arendt’s subtle discussions (such as if he was genuinely following orders or his actions reflected the ethos of the community, how could he be immoral?) undermine some of the seemingly irrefutable points of the prosecution and as such, accentuate by example the juxtaposed contradictions found also in the nearby projects of Fast, Tribe, and Bartana. I’m not sure whether Vicente intends this but it doesn’t matter. The show and its conceptual components have a life independent of its curator and artists.

Yael Bartana‘s Polish Pavillion Trilogy (...And Europe will be Stunned) is the most visually seductive work here. Her set of three, very slick videos are creepy because of their alluring images of clear eyed, idealistic Jewish youth (oddly with overtones of Hitler Youth) returning to settle in Poland, and highly ambiguous in their building of a watchtower and compound - disturbing with armbands, barbed wire and rousing music. Politically opposite positions oscillate in the viewer’s mind. A kibbutz doubles as concentration camp, Poland (a site to which Jews [and other races too] are urged to return) alternates with Palestine and aggressive zionism, victim merging with oppressor, martyr with dictator. For all this Bartana’s imagery is subtle. There is nothing thuggish to be seen, every camera angle is carefully story-boarded, and all the motivations seem at first glance nobly utopian.

Kerry Tribe’s lavish production There will be ______ tells the story of a murder/suicide mystery in 1928 in the Beverly Hills house Greystone Mansion - a place later used to as a set for many Hollywood films. Transcripts from thirty such movies were raided to provide dialogue for four alternative possible explanations for the crime - a gay lovers’ pact; an accident with Russian roulette; a jealous wife; an embezzling father exposed - a deliberate limitation that the artist set herself just as say French author Georges Perec did with his novels, writing while excluding a vowel like ‘e’ or structuring the chapter order like a knight jumping around a chessboard.

While visually stunning on a big screen with its lavish interiors and ubiquitous ever-observant servants, and accompanied by tension building organ music, Tribe’s melodramatic story lines are hard to follow, the sound partially drowned out by the nearby Geyer work, and the dialogue oddly (and deliberately) clunky - subtly so, not discordant in a Godardian sense.

Both A Guiding Light by Liam Gillick and Anton Vidokle, and Omer Fast’s The Casting are related, but more extreme. They showcase television and film methodology, revealing sound recording and camerawork/editing conventions, and undermining their transparency as in the Brechtian tradition. We see production methods that are normally hidden.

The script of A Guiding Light is based on a theoretical text written by Shanghai Biennale director Gao Shiming. It is read out aloud by a cast of eight young artists and art writers and responded to in rehearsal and discussed, for it attacks the notion of the artist being different from other workers and urges involvement in political action. The filming conventions (with two cameras) and dubbed over sound reference Guiding Light, a radio and television drama that ran in the States for 78 years - the implication being that contemporary art and its internal political debate is like an unending soap opera.

While Shiming’s text dominates (‘The artist is not the only person. The condition of the artist is what it is to be human now. Not what is is to be an artist’) and not all the participants agree, for some like Nadja Frank eloquently counter-argue. Shiming has the last word but there is plenty of dissension, though only on the surface perhaps and ineffectual, to be edited later by Gillick and Vidokle into a lively video, one designed to promote Shiming and his ideas.

Questions of authorial licence also arise with Omer Fast who in his editing of an interview with an American sergeant in Iraq, seamlessly blends two narratives together: one about the soldier picking up of a fast-driving German girl in Bavaria who asks him to mutilate her (her body is covered with self-inflicted scars and cigarette burns); the other about him in Iraq firing a warning shot into a speeding car full of civilians and accidentally killing a passenger.

There are two sides to the freestanding screen: on one we see Fast interviewing the soldier with some fast edits that mix up the clothing they are wearing; with the other we see actors playing out the story in frozen poses, their bodies stationary but eyes blinking and clothes ruffled by the desert breeze - some also playing Fast and the soldier surrounded by the film crew. One side could be about factual events and ‘truth’, the other about memory and how it gets interpreted, fabricated and distorted.

In True Stories / Scripted Realities Vicente has made a cerebral show that is also bodily and visually engrossing, an arrangement of videos that draws you into ideas embedded in soundtracks which often parallel the loaded imagery. Its abundant resonances and honed contrasts thematically thread the assorted projects into a coherent bundle that though complicated, has an easily discernible structured core, making it the best locally organised international exhibition the Govett has had for several years. Because of its synthesis, its exceptional.