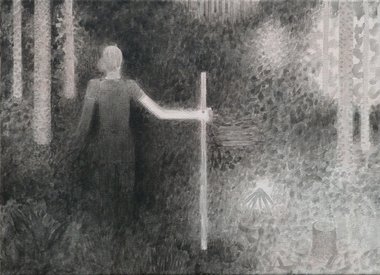 One particularly remarkable work is Late Arrival, an image of a girl in a dress carrying a staff like an Old Testament prophet, walking through the damp and dense undergrowth of some misty woods. The vertical stick is reflected in the grouped trunks of nearby trees, all arranged at different groupings on the page (one dark, the other light) to set off sympathetic cadences with the figure.

On the same time as Kushana Bush’s Omen, Michael Harrison’s Ivan Anthony show is down the corridor - in the group of rooms that overlook Karangahape Road. Harrison is a much more experienced artist than Bush yet his imagery looks made by somebody younger. This is largely because his interests are about the nature of adolescent angst and her subject matter in comparison is the interaction of adults.

Her flat opaque gouache shapes and his mottled transparent acrylic washes make two very different styles. Both dwell on desire but Harrison obsesses over innocence and possibly the happiness that ignorance of the world brings. His soft dappled light, surrounding lovestruck spindly-armed teenagers, amplifies their painful transformation into adults accompanied by intense bodily and mental vulnerability.

With Harrison you tend to get two sorts of image in his small, delicate, contemplative presentations: first, pristine, tidy, undappled works on paper that emphasise clarity of shape, the negative spaces in between, and silhouetted animal or plant forms; second, mottled, brusherly paintings that avoid super sharp edges, often with trees, streaming bands of light or waves of water, and young hetero couples. Plus there are combinations of the two.

One particularly remarkable work is Late Arrival, an image of a girl in a dress carrying a staff like an Old Testament prophet, and walking through the damp and dense undergrowth of some misty woods. The vertical stick is reflected in the grouped trunks of nearby trees, all arranged at different groupings on the page (one dark, the other light) to set off sympathetic cadences with the figure. Glowing patches of sunlight provide a diffuse counterpoint for the inverted l-shape of her horizontal arm and descending staff.

Others have an Edenic quality, hinting of guilt and libidinal conflict, fleeing God’s angel and covering their organs. Some tremulous images have linear drawings of gawky naked figures, others have them suspended in radiant pools of light. Often their glowing lanky arms are used as a kind of private semaphore or selected expressive alphabet on the page.

The cat motifs in this show demonstrate Harrison’s very private symbolism at its best. One shows an introspective looking creature ignoring an antler on its left and a distorted feline shadow above. It’s possibly about cat masculinity, sexual competitiveness, and ignoring aggression. The other shows four silhouetted animals positioned around the corners of the image, surrounding an intruder caught in a spotlight. It seems to ponder the nature of territorial control and the need to attack any foolish trespasser.

Venus in the Tenth House is an excellent show to drop in on during your rambles down K’ Rd, if you are curious about this artist. Late Arrival in particular is a work worth making a pilgrimage to see. With its intricate layering of complex foliage and flickering balls of light, it’s quite remarkable.