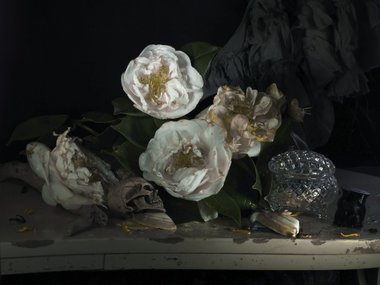 There is also the dilemma of what would happen if you mingled Pardington's photographs with (unglassed) oil paintings of the same images in the Dutch style, with an identical quality of cast and reflected light; would you interpret them differently? Would one series be intellectually superior to the other, or more worthy as an artistic endeavour because of its medium and its historical/political context?

Beautifully constructed, using items such as shells, crystal glasses, scarves, books, plants and globes, all of personal relevance to the artist and her family and carefully lit, this series of conspicuously elegant Fiona Pardington photographs in Two Room’s top floor gallery is in a sense a suite of imitation vanitas paintings. Despite the private significance of her props you feel transported back four hundred years, their ambience unnervingly not of our time or place.

There is an odd sense of humour here because, being generically about the transience of life and inevitability of death, they nevertheless lack the living (symbolic) creatures crawling around in the original seventeenth century Dutch paintings. There are no beetles, flies and snakes scattered throughout the wilted flowers, rotting fruit and withered plants, creepy-crawlies I myself tend to seek out when looking at such paintings. Everything in Pardington’s photographs really is dead. This even includes a bumble bee and as a trace of the living, a sloughed gecko skin.

Even though they are clearly photographs, because of their muted colour and traditional subject matter they scream historic painting. They ooze imagined paint in the cause of morally uplifting realism, and drive you to look at old Dutch art rather than contemporary practices - this in spite of some of their loaded post-colonial subject matter such as introduced weeds. The works are about cleverness and allusion. Despite their sensuality, you can’t really look at them for their own sake, they are so embedded in the past.

This quality makes them first cousins to the wonderful exhibition of Hiroshi Sugimoto‘s photographs of waxwork personages held at Auckland Art Gallery about ten years ago. Sugimoto, however, made you think about historical celebrity-hood and cultural icons, bodily representation and the translucent properties of wax. Pardington on the other hand, is closer to appropriation and (for example) Sherrie Levine‘s rephotographing of Walker Evan’s depression photographs (or images by Edward Western) in the late seventies - but like Sugimoto, photographing real objects not paintings, and of course using colour.

Like Levine there is a strange sense of the parasitical, even though Pardington’s work references only a genre, her compositions being strictly original as well as beautiful - with their plastic skulls, colonial navigation globes and squishy lemons.

There is also the dilemma of what would happen if you mingled Pardington’s photographs with (unglassed) oil paintings of the same images in the Dutch style, with an identical quality of cast and reflected light; would you interpret them differently? Would one series be intellectually superior to the other, or more worthy as an artistic endeavour because of its medium and its historical/political context?

Or is it a matter of surface, the sheen or softness of paper versus the brittle tactility of pigment? Is it an issue about reproduction and repeatability: about how many copies exist? Or perhaps just cost, one production method being a lot cheaper and less time consuming than the other?

I’m drawn to these deliciously clever photographs but they worry me. Despite the fact they have references to the history and inhabitants of Aotearoa, their links to the vanitas genre is so overwhelming they seem oddly pointless in the way they cling to art history. They are like a hollow shell or veneer, an empty simulacra. It’s not their slickness that irritates, to that I have no objection, but more their obviousness. Somehow - ever so discreetly - they vex.