One Viewer at a Time 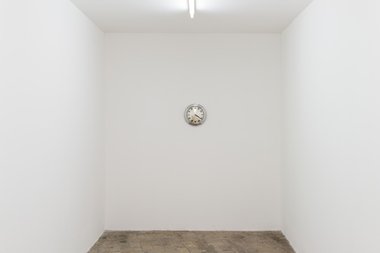 The point made is that we are so used to a very efficient method of consumption that we lose the time for a deeper understanding. However one-on one isn't a particularly convincing solution. What really frustrates is how little payoff seems to result from the reverential contemplation enforced by this use of stand-alone spaces. This show feels like it fits within that realm of style over substance.

Group exhibition
One On One

In the accompanying press materials to the new group show, One on One at KW Institute for Contemporary Art, Charlotte Klonk’s text A Room of One’s Own, discusses the idea of personal space and spaces for contemplation, referencing lectures by Virginia Woolf and Charlotte Bronte’s novel Villette.

In the latter, the character of Lucy Snow has a penchant for visiting museums, and viewing the work alone. The historical significance of this explains Klonk, is that in the 19th century, museums and galleries were some of the few places where a woman could walk around unaccompanied and be given space for personal reflection without the pressures of the time upon them. As a result, Lucy finds herself totally disinterested in the works admired by art critics, and instead drawn to the smaller, “unimposing still lifes” hung elsewhere. This appreciation for “inconspicuous things” gives her much greater satisfaction, and it’s something she is apparently only able to discover when she is left alone to investigate the works.

Klonk goes on to show that in Bronte’s story, Lucy is in fact not entirely alone in the gallery (she later meets someone in the gallery who becomes her lover). Her point however, is that in the modern era arguably even our own private bedrooms no longer provide the solace they once did thanks to our growing online participation and technological interconnectivity.

One on One’s appeal then, is seemingly in its attempt to throw things into a completely different light by demanding concentrated and solitary contemplation of each individual artwork in its own self-contained, white walled (in most cases) box, complete with a ‘do not disturb’ card to be hung on the door as a warning to other patrons that the small one person gallery is occupied. The fact that this feels reminiscent of an ‘occupied’ sign on a bathroom stall is something we’ll leave for ‘contemplation’ elsewhere.

What feels particularly galling about Klonk’s text is how she winds up acknowledging that there is no expectation that the viewer will come across great works of art. In fact there is even a further acknowledgment that the works here are “too little explained, evaluated or interpreted,” Which is sort of akin to admitting that the show is underdeveloped. The main question apparently, is what will happen in the public sphere after the exhibition has been seen? Will there still be the same kind of discussion and debate? Klonk even ponders, will a new “experimental ground” arise for future exhibitions and shows? It feels, on reflection, like a fantastically stupid question, that only someone with flowers in their braids, lost in a meadow, could ask. This isn’t the first time someone has tried to change up how the viewer experiences art within a typical gallery space.

The main result of this novel arrangement seems to be that now each individual item requires you to queue in order to view it, sometimes in my case for so long that I was unable to see several works. I simply ran out of time. As a result, each individual work ends up weighed with the pressure to justify the wait.

It might seem trite to complain about the queue, but I would argue that given the emphasis on the show’s arrangement, it is valid. Your average white walled gallery space works in such a way that all the work is visually accessible to anyone at all times (save perhaps for that one person who always gets too close to the work and momentarily blocks the view for everyone else).

If you are going to alter the space the way the curators have here, the resulting congestion and irritation feels like a relevant factor for complaint. The show ends up feeling so procedural that any chance to really connect with the work is lost in a process which seems much more like waiting in line to get soup from the Soup Nazi in Seinfeld. Two steps forward, order, two steps left, pause, two steps left, collect and depart. Here any deeper connection instead becomes wait in line, hang sign, engage (while still being aware of the queue behind you), form opinion, exit, collect sign off door handle.

Obviously that’s part of the point; we are so used to a very efficient method of consumption that we lose the time for a deeper understanding. However this isn’t a particularly convincing solution. What really frustrates is how little payoff seems to result from the reverential, one-on-one contemplation enforced by this use of stand-alone spaces. This show feels like it fits within that realm of style over substance.

What’s more annoying than that even is that the artists in the show include the likes of Hans-Peter Feldmann and Blinky Palmero, participants who are obviously well-known with impressive oeuvres, but whose contributions end up looking semi ridiculous when housed in their own white mausoleum.

The works also have very little in common, save perhaps for how underwhelming they look individually. It could of course be that this was the intention of the curators, to initiate a broader discussion about what qualifies as art and how we really feel about a work when no one is looking, but somehow I doubt it. (Can you imagine the pitch to the artists? “We want to show your work in a way which makes everyone think it’s actually awful.”).

More likely they were so intent on the idea of cranking up the paradigm of the white walled gallery space, now so public in the age of globalisation, that they forgot the most important bit: the work. It reminds me of going to gallery openings as a child, and wondering why I never saw anyone looking at the work. I would ask my mother, who was an art student at the time, and she would jokingly tell me not to be silly, that openings were for networking and socialising and that people looked at the art later. Perhaps the next show will really take the bull by the horns, and leave all the art in the basement still in its bubble wrap. Then we really don’t have to worry about it, and that way we don’t even have to queue.

(All quotes from Charlotte Klonk, A Room of One’s Own, found in the publication “One on One”, edited by Susanna Pfeffer, Verlag der Buchhandlung Walter König, Cologne, 2012)